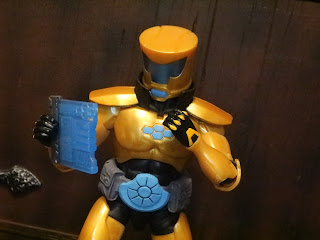 At the end of June I stumbled upon a few figures from the Bring on the Bad Guys/ Xemnu series of Marvel Legend figures. Would you believe that this isn't the newest series now? Seriously, as I'm writing this I just got Ironheart in the mail. That's crazy! I cannot believe how fast Hasbro can put out Marvel Legends figures! Anyways, the second newest (as of this writing) series of Marvel Legends figures is all about the bad guys and features a nice mixture of villains from different eras. Hasbro distribution of Marvel Legends is usually pretty good and I've since completed Xemnu with all purchases actually being in physical stores (3 at Target, 1 at Walmart, and 2 at GameStop)! First up I'm checking out the A.I.M. Scientist Supreme. I'm not very familiar with this character and, to the best of my knowledge, the title has been held by multiple characters over the years. This guy seems like a more modern incarnation of the character, though. He's a unique looking figure and goes great with M.O.D.O.K. and the other A.I.M. figures so he already had a spot in my collection. Let';s check out the A.I.M. Scientist Supreme after the break... 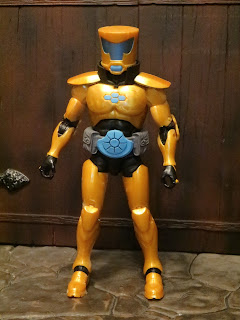 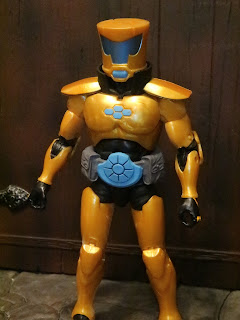 The Positives:
* The A.I.M. agents definitely are rocking the yellow color scheme and that's what we get with the Scientist Supreme. Rather than being decked out in a regular yellow costume, however, he has the pearlescent costume that Hasbro often uses to recreate the look of metal. I'm not always a fan of it but I like it here. I'm not sure what the material of the costume is really supposed to be as I'd think a lab suit like this would be more of a rubber material but the armored arms and legs make it seem more like metal. Maybe it's supposed to be some sort of heavy duty flexible plastic? I'm sure the limbs are reused but the torso is new and quite unique with shoulder pads and the cool A.I.M. honeycomb logo done up in blue on the chest. 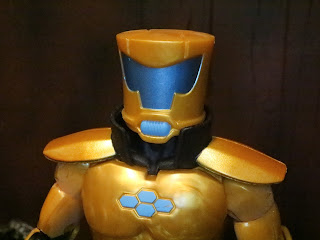 * The beekeeper styled hazmat helmet looks great. It conceals the Scientist Supreme's identity though the large metallic blue visor surely allows the wearer a full field of vision. The high collar looks great and yet there's still an excellent range of motion here. There's actually an A.I.M. honeycomb etched in the back of the collar, too. 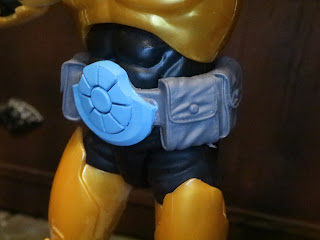 * I love this belt. It's funky, shows the other grunts who's in charge, and it has some awesome pouches that remind me of Batman's utility belt which wrap all the way around. It's not removable but it is a separate piece. 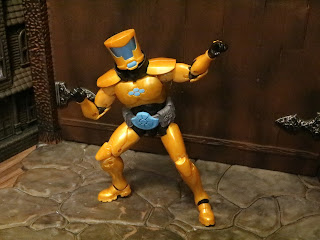 * The articulation on the A.I.M. Scientist Supreme is excellent. It's as good as most other Marvel Legends but with the addition of the excellent balljointed head and the really useful balljointed torso. He's durable and really fun to pose despite not being an overly action oriented character. 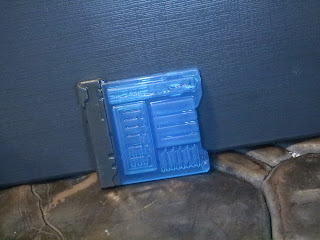 * The Scientist Supreme only comes with one accessory: Some sort of high tech, futuristic tablet device. The blue part is actually translucent so perhaps it's some sort of holographic projection? It does work well with the character and he looks great holding it. 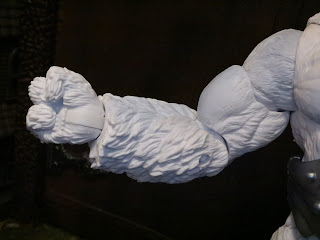 * Six of the seven figures in this series come with parts for the Xemnu build-a-figure (Dr. Doom is the figure without a piece) and the A.I.M. Scientist Supreme comes with the right arm. After realizing I really wanted four of the figures in the set and was interested in Xemnu I decided to pick up everyone except Doom and complete him. If you're buying them all the BAF is a nice extra incentive. Otherwise, you can sell it and probably make a good percentage of your money back or trade it for something you need. 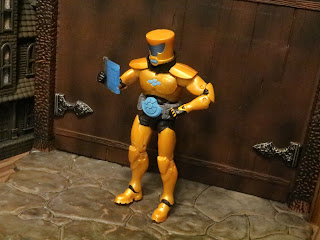 While the A.I.M. Scientist Supreme isn't the most exciting Marvel Legends figure released he is a pretty nice figure. An extra weapon or something would have been really cool but the Scientist Supreme is still a really high quality figure who enhances an A.I.M. display nicely. I love the look of his gold mixed with the light blue details. It really stands out among the other villains I have! He's a Great figure and well worth picking up if you have M.O.D.O.K. or if you're wanting to build Xemnu.