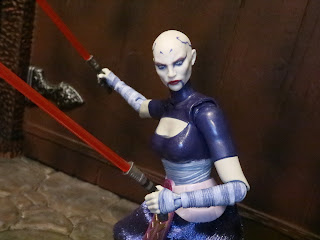 New figures from Star Wars: The Black Series Phase IV have been very tough to find this year and somehow I managed to stumble upon Asajj Ventress when she was listed on Amazon at a regular price. While she's never appeared in any of the live-action films Asajj Ventress is a popular character with an excellent storyline spanning The Clone Wars animated series and some of the best books in the new canon, particularly Dooku: Jedi Lost and Dark Disciple. This is probably the most classic and recognizable look for Ventress and it was a great choice for her first Black Series figure (I'd love a Dark Disciple "hero" version of Asajj Ventress along with Quinlan Vos, too) and Hasbro did a pretty nice job with it. Let's take a look at one of the popular non-film characters of the Prequel era after the break... 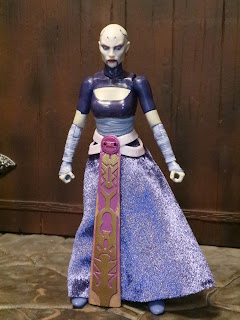 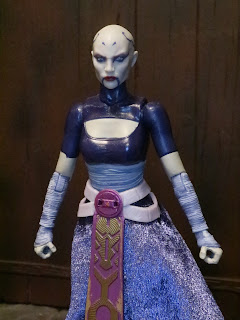 The Positives:
* Asajj Ventress has a fantastic outfit that's fairly colorful (while still being subdued and villain-like) and helps her stand out from the black robes of the rest of the Sith. The wrappings on her forearms and her midsection are nicely sculpted and given some additional paint applications that really bring out all of the detail. Originating in the 2003 Clone Wars series and most famously appearing in The Clone Wars, Asajj Ventress is an animated character who Hasbro has done a great job of translating into a realistic style for the Black Series (though Ventress has been depicted realistically many times before). The sculpt is excellent, capturing her slender, athletic frame nicely. She looks built to excel at lightsaber combat! 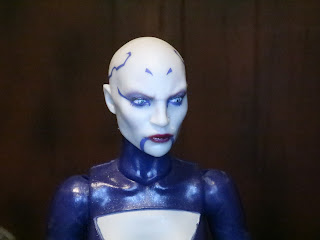 * The headsculpt is also pretty fantastic. Her eyes are very intense and the paintwork on the tattoos on her head is fantastic. She's an imposing figure for sure! 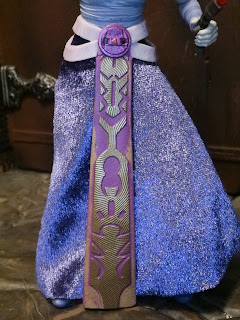 * Asajj Ventress' lower body is covered by a soft goods skirt that looks pretty fancy and luxurious. There's also a very nicely sculpted and painted piece hanging down from the belts around her waist. Underneath her skirt she shares the same legs as the Dark Side Vision version of Rey which works just fine. You couldn't really seem them on that figure and you can't really see them on this one, either. 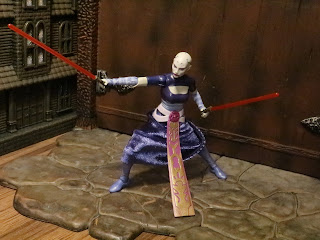 * The articulation is excellent as every joint has a fantastic range of motion plus Asajj Ventress has extra joints like the lateral butterfly biceps and a balljointed neck. You can definitely have fun getting her into some extreme lightsaber dueling poses. 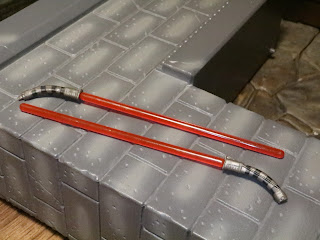 * Asajj Ventress comes with her dual ergonomic lightsabers styled after Count Dooku's lightsaber. They look cool and have fantastic red blades which can be popped off. 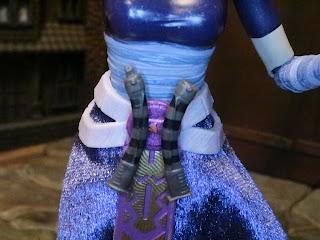 * Both lightsaber hilts can be plugged into the front of her belt where they stay securely and look really cool. 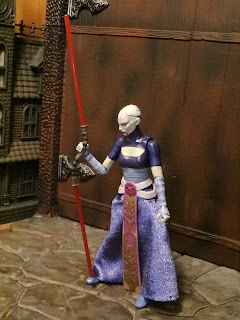 * The bottoms of the hilts can also connect together to make this unusual double bladed lightsaber. It seems like it'd be a bit cumbersome to use but it's a cool look nonetheless. Sometimes you gotta focus on showmanship over function, y'know? 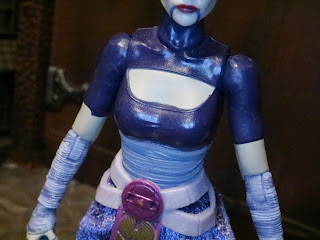 The Negatives:
* There are some little paint errors on Ventress' dark purple shirt, most noticeably on her right sleeve although you can see them on the cut out chest section of her shirt as well. 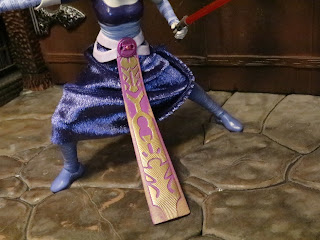 * The sculpted decorative flap that hangs down from Ventress' belt is really impressive but it does get in the way of posing her if you do a deep stance. Well, not get in the way so much as just stand around looking awkward in those poses. It's a shame, too, because it's such a cool looking decoration. 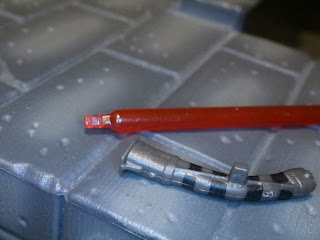 * I say this with nearly ever Star Wars: The Black Series release but I really wish Hasbro would just give us a separate hilt rather than these tiny pins for the blades. Yes, they're getting slightly better, but not solid enough that I'm really comfortable with them. 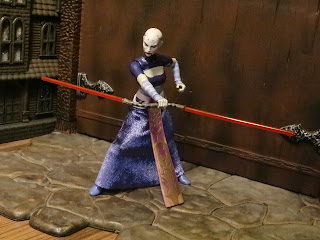 I was really excited for Asajj Ventress and while I thought she could end up being one of the best figures in this series I have to admit that weird little issues like the solid tassel hanging from her belt and some of the messy paintwork brought her down a bit. She's still a Good and a 1/2 figure and I can't imagine too many collectors who love The Clone Wars and the Prequel era would want to pass her by but with a little more tweaking or some slightly better QC she could have been one of the best figures in the line to date.
This is the first figure of Asajj Ventress that I've reviewed. For more Star Wars: The Black Series Phase IV reviews check out the following:
332nd Ahsoka's Clone Trooper
Admiral Ackbar
Ahsoka Tano (The Clone Wars)
The Armorer
Boba Fett
Bo-Katan Kryze
Cad Bane
Clone Trooper (Holiday Edition)
Darth Vader
Din Djarin (The Mandalorian) & The Child
Garazeb "Zeb" Orrelios
Greef Karga
Han Solo (Endor)
Hunter
Imperial Stormtrooper
Incinerator Trooper
Jar Jar Binks
Jaxxon
Kuiil
Luke Skywalker (Endor)
The Mandalorian
Mandalorian Loyalist
Mandalorian Super Commando
Moff Gideon
Phase I Clone Trooper
Phase I Clone Trooper Lieutenant
Princess Leia Organa (Endor)
Range Trooper (Holiday Edition)
Remnant Stormtrooper
Rey (Dark Side Vision)
Sith Trooper (Holiday Edition)
Speeder Bike, Scout Trooper, & The Child
Teebo (Ewok)
Posted by Barbecue17 at 7/29/2021