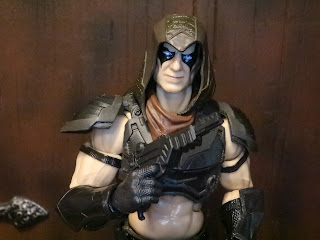 Are you ready for a stream of new G.I. Joe: Classified Series reviews? Awesome, because I am too! I've managed to get my hands on a few new figures lately and I'm kicking things off with a look at Zartan, the leader of the Dreadnoks and a master of disguise. Zartan was released in 1984 (packaged with the Chameleon swamp skier) and was really the first G.I. Joe figure to start implementing sci-fi/ fantasy elements into the franchise. Who is Zartan? He's a mystical user of technological gadgets who might be a mutant, possibly possesses supernatural abilities, and who also may have a mental illness (if the original filecard is to be believed). He's a skilled, capable, and unpredictable opponent who has been near the center of so many of the major events of the G.I. Joe universe and he's one of the most popular characters in the franchise. Hasbro is really getting the main Cobra members and allies out quickly, opting to release the A-listers first rather than holding them back to artificially add longevity to the line. Since Zartan is a standard release he's been relatively easy to find and lots of e-tailers and local shops should be able to hook you up. Let's take a look at Zartan after the break and see what new tricks this guy is up to.... 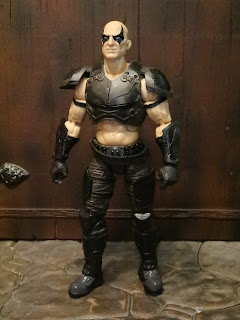 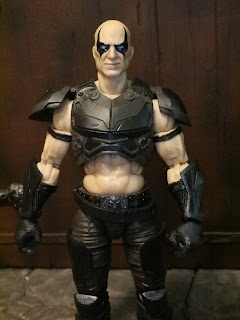 The Positives:
* Hasbro is really producing some incredible figures and Zartan is another hit. He's very faithful to the vintage toy overall but with some details from other eras. The armored he's wearing reminds me a lot of the Sigma 6 Zartan (which showed up on the 25th Anniversary Zartan, too). The armor is a separate piece over his torso but it's not designed to be removable. The sculpting is excellent and he's covered with interesting textures and armored gear. 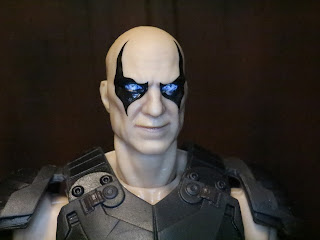 * The headsculpt is so creepy on Zartan! At first you might think he has whited out eyes but when you look at him a bit more you'll realize they're an icy blue. The headsculpt reminds me of Arnold Vosloo who played Zartan in Rise of Cobra and retaliation. It's an incredible headsculpt with lots of character and personality. The paintwork is just phenomenal, too. 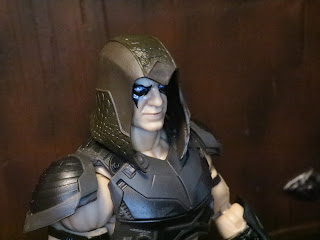 * Zartan's hood is removable and he looks really cool both without it and wearing it. The hood seems to me a mixture of some sort of leather and some sort of hide. maybe Gator hide or snake skin? It fits on him really well as the interior is sculpted to fit perfectly over his head, so no worries about this slipping off. 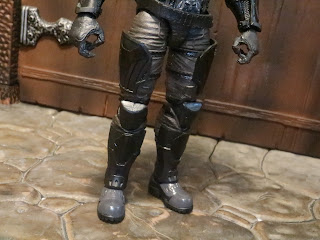 * Zartan presumably hangs out in lots of rough and nasty places so he's equipped with some pretty durable boots and lots of strategically placed armor to give him the edge in a fight. I imagine there might be tech in their that can help him with his disguises if you go with the theory that he uses a blend of his own arcane powers and holographic technology to truly change his appearance. 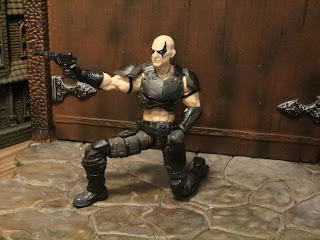 * The G.I. Joe: Classified Series has some incredible articulation and Zartan is a great figure to show it off with. he's got all of the joints you expect and almost nothing that gets in the way of him using them. His shoulder pads are attached to his armor and are a bit flexible so they can move around as needed. 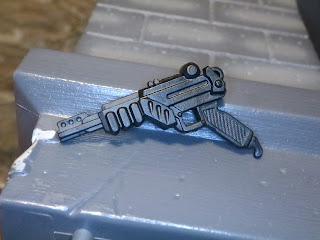 * Zartan comes with lots of accessories so let's start checking them out. While I do wish he came with a compound bow, I'll accept his pistol, too. It's very similar to the vintage Zartan's pistol with a slightly more modern edge. There's got to be more to this than just being a pistol, right? I'm sure it has some nasty surprises packed inside. 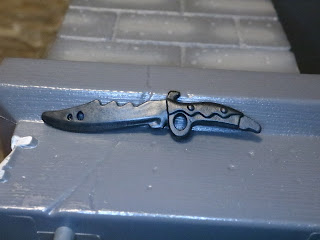 * Next up is a pretty fearsome looking knife. This is a close quarters weapon for sure and I hate to think of what Zartan is capable of when wielding this thing. 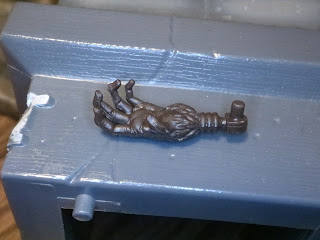 * Now that we've got the weapons out of the way we can get into the weirder stuff Zartan comes with. First up is a monkey's paw. Yes, a monkey's paw. Why a monkey's paw? It's probably a reference to the 1902 W.W. Jacobs story "The Monkey's Paw" where a cursed monkey's paw grants wishes in unintended and undesirable ways. Zartan is clearly into some creepy stuff and this unusual accessory very vividly illustrates that. This is very creative and just an incredible bit of characterization and storytelling shown through an accessory. 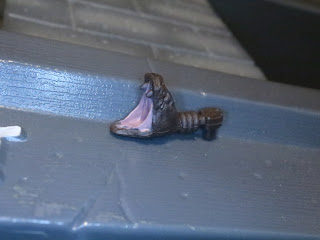 * Next up is a preserved snake head. Zartan carries some weird crap around with him, doesn't he? At one of the virtual panels I think one of the designers stated that this is a visual way to show that Zartan may not be completely loyal to Cobra and has his own interests at heart. That's pretty cool and, again, a great way to tell a story through an accessory. 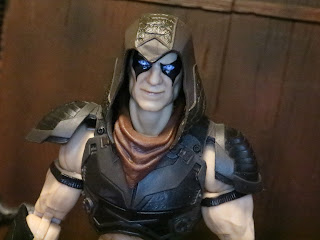 * If you want to change up Zartan's appearance you've got a few options. First up is the hood, which I mentioned above. Another option is the bandanna. It's not the same sculpt as the Viper's bandanna as it's a bit smaller and thinner. It just clips around his neck and while it's brown, it's a lighter brown and adds a touch of color to the figure. 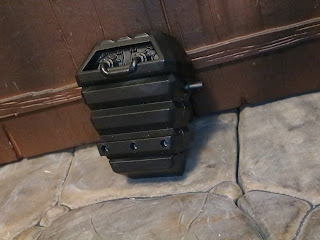 * Zartan comes with a bulky and oddly shaped backpack. It's very similar to the vintage toy's accessories which was also included with the figure in the 25th Anniversary line and the Rise of Cobra line. It's always been used to hold Zartan's disguises so that's the purpose it serves here... 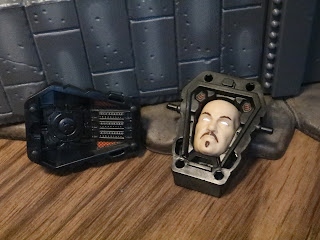 * Inside is a a rather sophisticated interior with lots of details and a mask. The idea seems to be that Zartan's backpack can create masks, probably similar to how the disguises are made in the Mission: Impossible films. That's a really cool idea and I like how, again, this figure shows Zartan using technological means while also hinting at his supernatural abilities. The backpack comes apart easily and the mask fits securely inside. 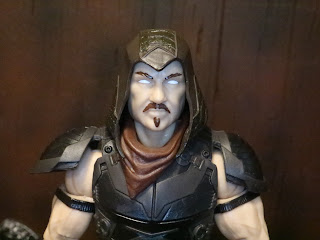 * The mask looks similar to the vintage toy's mask. It's a true mask, not an alternate headsculpt, and it just fits over his face. With the hood on the seams are hidden and you get a really disturbing and pupilless visage. Again, I imagine Zartan prints masks and then uses his other abilities to help complete his "disguises." 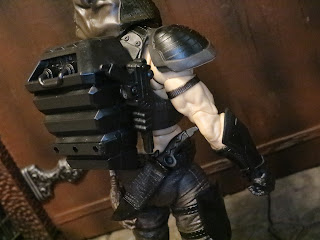 * One of the running themes of the Classified Series is that figures can hold all of their accessories in some way. Zartan can hold all of them and still have his hands free which is a really cool feature. The knife fits in a nicely designed sheathe on the back of Zartan's belt while the pistol fits over a plug on the side of his backpack. 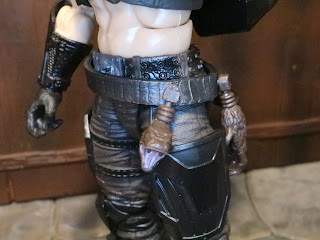 * The monkey's paw and the snake head can also be stored on Zartan's belt. There's also an incredibly cool belt buckle of the horned demon Dreadnoks logo. Think we'll get more Dreadnoks in the future? 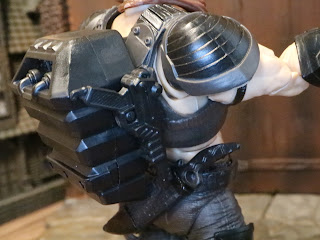 * My only negative is that I'm not a fan of the way the pistol attaches to the backpack. You push the peg through the trigger guard. It looks odd and just doesn't make any sense. I really wish Zartan had a holder on his right hip or a smaller holster attached to the backpack. 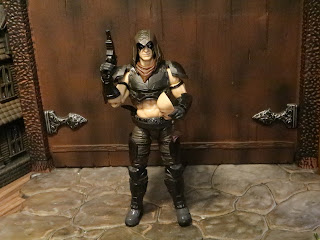 While I would have loved for Zartan to come with a compound bow or some sort of short sword like the RoC Zartan there's no denying this is an incredible figure loaded with great accessories. Zartan has nine accessories! That's amazing! Yeah, they're not all huge weapons but stuff like the monkey's paw and the snake head really bring the character to life. I'm a huge fan of how stuff like G.I. Joe and Metal Gear Solid merge together a tactical military feel with elements of the supernatural and Zartan definitely shows that off wonderfully. This is an Epic figure! While he's the leader of the Dreadnoks, Zartan is usually viewed as one of the main Cobra operatives and now, along with Cobra Commander, Destro, Baroness, Major Bludd, and Storm Shadow, we sort of have the six main members and allies of Cobra. Sure there are other characters like Serpentor and we still need a standard Storm Shadow but I'm impressed that Hasbro released the most A-list Cobra figures so fast!