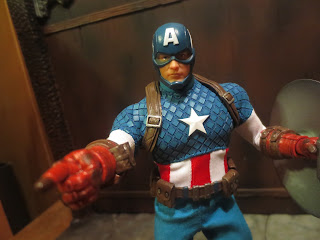 I am absolutely impressed by Mezco's One:12 Collective line and I'm getting ready to begin a string of reviews for some of the most recent figures, but first I want to look back at one of last year's releases that I just picked up: Captain America. Mezco has released three versions of Cap (this one, a deluxe Classic con exclusive version, and a Previews exclusive Commander Rogers) but this modern version was the one that jumped out at me due to the more subdued, yet classic, color scheme. He was a 2016 release and is my first One:12 Collective figure in the Marvel Universe series. Had I picked him up last year there is no doubt he would have made my Best of the Rest list. Let's jump in and take a look at what was one of the coolest release of last year! Join me after the break... 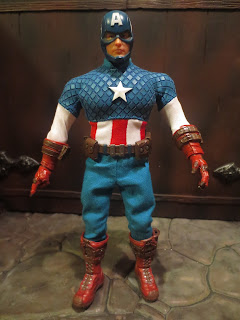 * The articulation on the One:12 Collective line is just fantastic and Cap here is a joy to pose over and over again. The joints feel designed and crafted to perfection; you'll really be amazed by how sturdy the figure feels and how easy it is to put it in the poses you want to see. 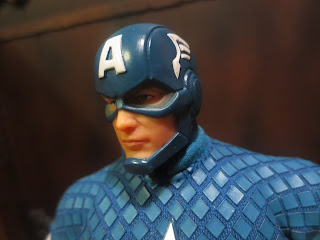 * Cap comes with two portraits and, since the heads swap out really easily on these figures, you shouldn't have any problems going back and forth. The first portrait is the standard helmeted Cap head with the armored headgear and less prominent wings on the sides. This is a fairly modern look for Captain America that resembles his Ultimates or his Marvel Cinematic Universe appearances. The eyes and face are really good; this actually looks like someone wearing headgear rather than someone wearing face paint. 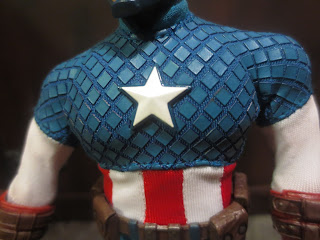 * Cap's outfit is incredible. While the red and white stripes and the sleeves are simply made from a stretchy material, the tunic itself actually has little rubbery bits applied all over it, kind of like a scale-armor of some sort. The star is also a separate piece attached to the front. It looks perfect and, because it's an actual outfit, it looks good in nearly any pose you could put the figure in. I really don't feel like this inhibits Cap's articulation at all. 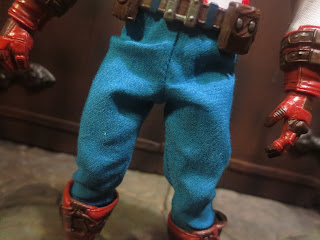 * Cap's pants are a little different. They're still part of the same outfit but they have a nit more of the feel of a military uniform. It's a really nice touch. 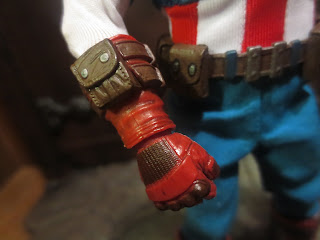 * Cap's gloves and wrist guards are sculpted pieces with some incredible detail and textures. I love the (non-functional) pouches on the wrists and the leathery grips and pads on the gloves. 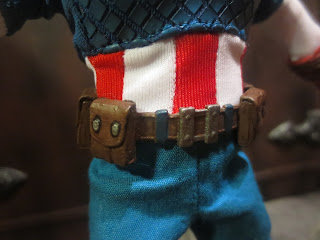 * The belt is also a separate piece with some incredible detail. It's not removable. it does, however, stay in place flawlessly. It definitely has a military vibe rather than a superhero vibe which is very fitting for Captain America. 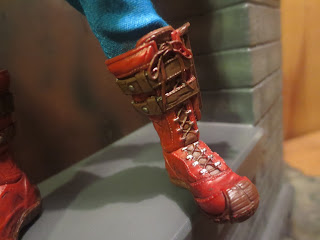 * Cap's boots are awesome, too. Again, the aesthetic is very much that of a piece of military gear rather than something a superhero might wear. I'm not sure yet how much of that is unique to Cap here or how much of that is going to be Mezco's personal take on these characters, but I love it here. The laces and the extended soles on the front of the boots are really well done. 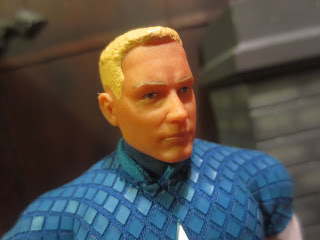 * Prior to picking up Cap, the only One:12 Collective figures I've owned have been Mezco's Batmans based either on The Dark Knight Returns or Batman v. Superman. Most of the Marvel and DC characters aren't based on direct sources, however, and kind of have their own unique look. While this headsculpt isn't any specific version of Steve Rogers, it has a great lifelike quality to it. It's a very timeless portrayal of Steve that fits well with the work Mezco's doing. The hair could be a bit less "yellow" but is still looks pretty darn good. 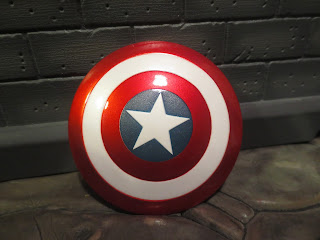 * Let's talk about accessories, because Captain Rogers is definitely loaded with them. First and foremost, Cap is sporting his iconic vibranium shield. This is a gorgeous, classic looking shield that has a great glossiness to it; it actually looks like it's made from metal. Beautiful! 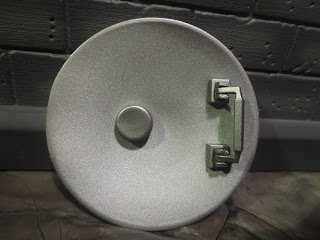 * The back of the shield may be less impressive than many of Hasbro's releases but, let me assure you, it's far more functional. First, you can see the handle. The handle is on a hinge and it easily slides over the gripping hand of Cap (left or right, it doesn't matter) for a solid battle grip. Secondly, there's the odd little circle just off-center. Guess what that is? It's a magnet. Want to know why there's a magnet here? Well, you're going to find out... 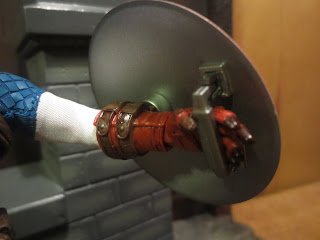 * First, the magnet actually attaches to the little magnets in the pouches on Cap's wrists. Pretty cool, right? This is an incredibly way to give Cap a solid grip on his shield without the fuss of straps or anything. 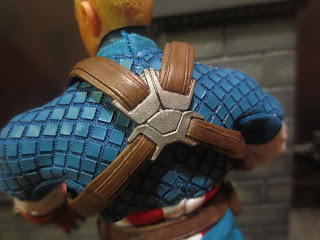 * Oh, let me point out this cool strap that fits over Cap's shoulders. It gives him a bit more complex look and has a simple but effective paintjob to make this seem like a well worn piece of military equipment. Want to know something else cool? There's a magnet in the metal clasp on the back. What could that be for? 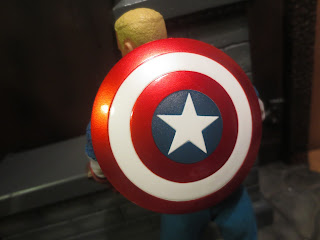 * Why it allows Captain America to easily throw his shield on his back and tote it around. How cool is that, am I right? Has any other 6 inch cap figure ever had a feature like this? I'm loving it! 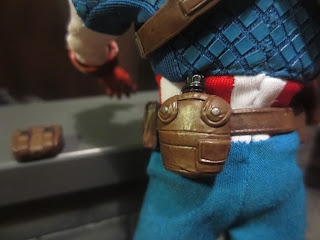 * Let's look at some more accessories. On the back of Steve's belt is a small tab that can hold one of two accessories. First is a canteen in case Cap gets thirsty. 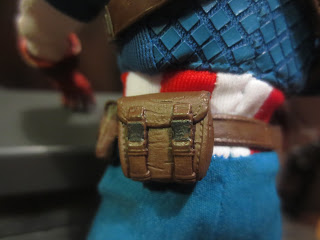 * Second is a little pouch filled with some apple pie in case Cap gets hungry. OK, I actually don't know what's inside. The pouch and canteen swap out easily enough, though. 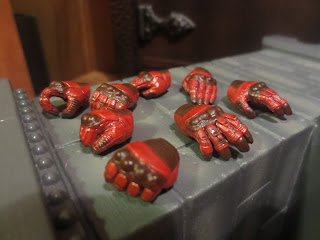 * I should point out that Cap comes with 11 interchangeable hands. 11! That's a lot of hands! Pictures here are the stand hands you would expect: Two standard grips, two fists, two hands for holding the handle of the shield, and two with a slimmer grip for shield tossing poses. These things swap out quite easily and feel very sturdy. 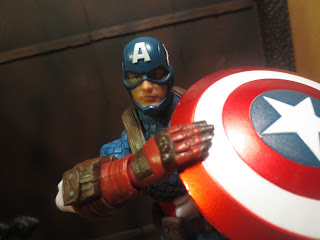 * Here's the shield grip in action. Want Cap to hold his shield or begin to toss it like a discus? These are the hands to use. You get two of them, by the way. Of course, there are three more hands that are really unique... 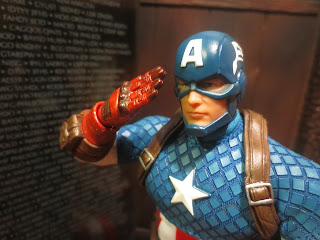 * First is the saluting right hand. This is a great sculpt that captures the honorable aspect of Captain America's character perfectly.

* Next is a pointing right hand. Want to put Cap in an Uncle Sam like pose or have him leading the way in battle? Heck, maybe you just want to have him point and tell the Hulk where to smash? This is the hand for you. 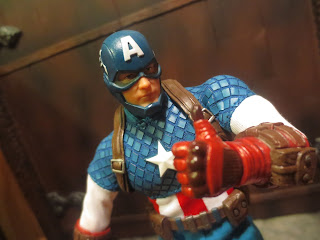 * Last, but not least, is a left hand of Cap giving a thumbs up. This one's awesome because what's cooler than Cap giving you a thumbs up? Not much. 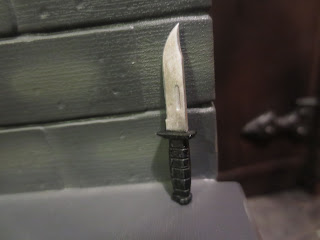 * Just in case he needs it, Cap also comes with a cool little combat knife. The paintwork and sculpting on this is excellent, particularly for such a small accessory. 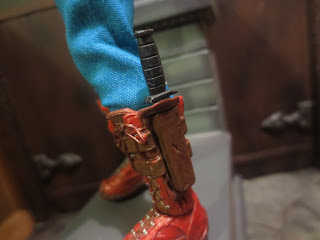 * It's also nice to know that the knife tucks firmly into a small sheathe on the side of Cap's left boot. 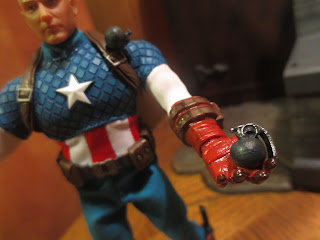 * Need something to blow up some fascists/ Nazis/ authoritarians? Cap comes with two cool little grenades that can clip on his belt or his harness. They kind of look like M67 fragmentation grenades and have some nice paintwork and weathering. 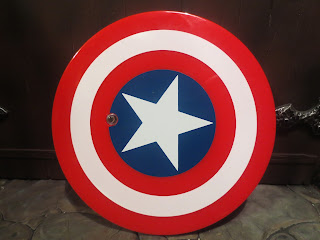 * Mezco has been giving these figures some nice, large display bases and Captain America's fittingly resembles his shield. It's a round plastic base with a clear plastic foot peg off-centered to give the figure a firmer stance. 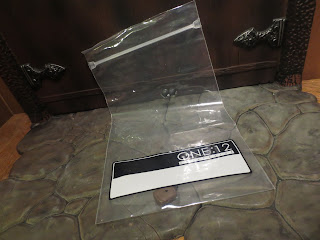 * To carry all of the little accessories and extra hands when not in use, Mezco also gives you a cool branded bag. It's just a simple plastic bag with a Ziploc styled bag, but it's a cool extra. 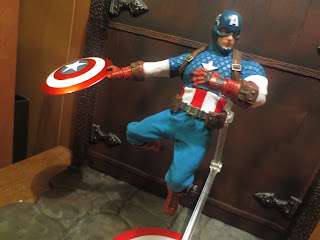 * There is also an articulated display arm that can be inserted where the peg is (you just have to remove the peg). You can get some great, secure poses here as the joints are very nice and tight on the display bar. It can absolutely support the figure's weight. 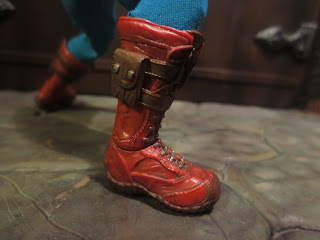 *My only complaint with this figure is that the ankle joints don't have a lot of pivot to them. The hinge works OK, but I'd really like to be able to have some lateral movement. Mezco just addressed this at their pre Toy Fair 2017 event, so hopefully we'll see some change soon. 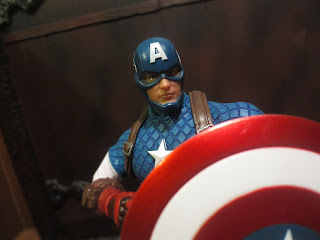 This guy is absolutely amazing. I've been a big fan of Mezco's Batman offerings in this range ever since I discovered them last summer, but Cap is the figure that made me decide to get into this line beyond just picking up Batman figures. He's nearly flawless and I love Mezco's design aesthetic on these. This guy absolutely gets an Epic rating. My advice to you is to, if you're interested in him, pick him up as soon as possible. He's worth the somewhat steep price tag on these guys.


I haven't reviewed many Marvel figures and the only Captain America I've reviewed is from the Ms. Marvel, Captain America, & Radioactive Man 3-Pack. For more One:12 Collective reviews, check out the following: