Action Figure Review: Ram Man from Masters of the Universe Origins by Mattel 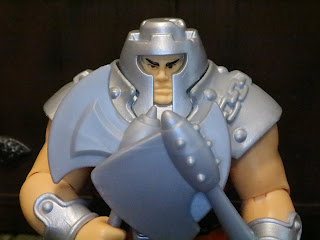 I just reviewed the deluxe Masters of the Universe Origins Clamp Champ a day or two ago so how about now I get around to reviewing Ram Man? I love Ram Man. He's one of my favorite MOTU characters and one of my favorite vintage figures. Some people aren't too thrilled by the vintage Ram Man figure since he was built so differently from the other figures in the line but I've always liked him. I never owned Ram Man as a kid but now I have three vintage Ram Mans (Ram Men?) and I always keep one of them on my desk at work. The MOTU Origins Ram Man differs from the rest of the figures in the line, too. He really does feel fairly deluxe and Mattel gave him some very cool accessories. Ready for a look at Ram Man? Then join me after the break... 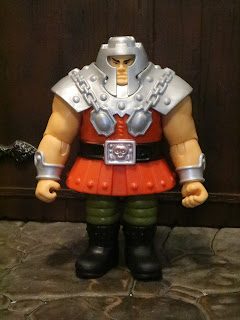 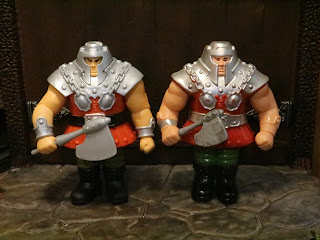 Comparison:
*  The Masters of the Universe Origins Ram Man figure is on the left while the vintage Ram Man is on the right. The Origins figure really looks like the vintage figure, doesn't it? They're pretty much the same size and painted quite similarly. He feels very faithful to the vintage release though with some improved articulation. 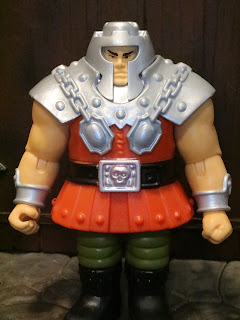 * Here's Ram Man! Ram Man is a completely original sculpt that is quite different from the rest of the Origins figures so far. He's much chunkier with a built in action feature (his legs do actually spring, but more on that in a moment) and is actually a bit shorter than the other figures. I prefer him to be larger than the other heroes like he was in MOTUC but him being a bit shorter is faithful to the vintage line. The work on his armor is quite nice with lots of detail, especially on the really cool skull belt buckle. The armor is a rubbery overlay placed on top of the figure's torso. 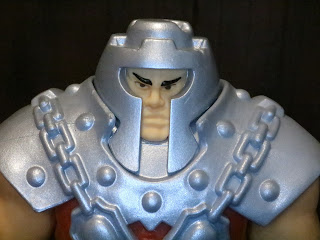 * Ram Man's classic helmeted look is pretty cool. While his helmet isn't removable it is a separate piece glued over the face which just makes it look better. Ram Man's facial features look quite similar to the vintage toy but are much crisper. I like the expression on his face, like he's trying to decide if he's getting ready to ram something or not. 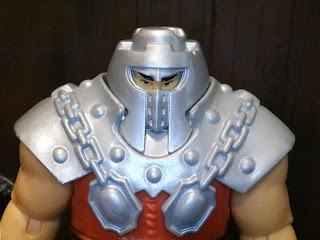 * A big surprise to me is the inclusion of a second head. It's not an un-helmeted head like the MOTUC figure, though, but a more armored helmet. After doing some research the best I can tell is that this helmet is a new Mattel creation inspired by some of the earlier Mark Taylor drawings where Ram Man has more of his face covered. The helmets are largely the same but the face plate covering Ram Man's mouth and forehead remind me of the Shredder. 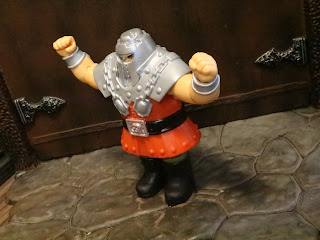 * Ram Man actually retains his vintage action feature! It's a little different but I kind of think it's an improvement. When you push down on his legs they go up into his body and lock into place. Push down on them again and they unlock, allowing him to spring upwards! It's kind of fun. Not overly impressive or anything but it does work about as well as the vintage toy and it feels like he has a nice, strong spring to him. 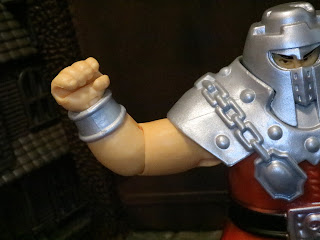 * While Ram Man is built differently than the rest of the Origins figures so far you can swap his arms and head out with the other figures. Need someone with bulkier, beefier arms? Go for it! 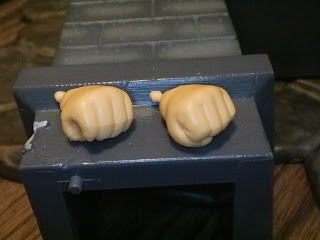 * Like Clamp Champ Ram Man also comes with two interchangeable left hands. There's an open left hand that lets him hold one of his weapons and a closed left hand that looks more like the vintage toy. The hands swap easily but don't they look like Peter Griffin's hands from Family Guy? 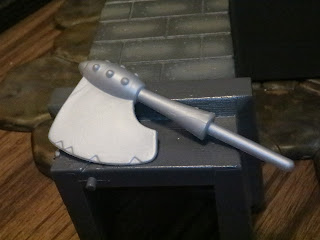 * Ram Man comes with his standard bearded axe. This also came with the Ram Man inspired Goldberg figure from Masters of the WWE Universe so it's not a new or unique accessory but it's one needed for Ram Man. 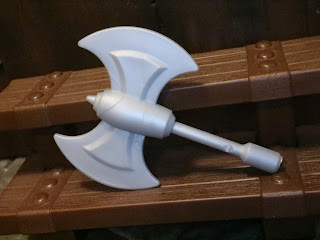 * Ram Man's second axe is a double bladed axe that's pretty nicely sized. I really like it. It's a new accessory for Ram Man that I couldn't find any previous basis for, so that's kind of cool. Ram Man looks awesome ramming into battle with two axes, doesn't he? 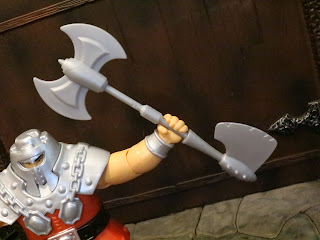 * A really cool feature of Ram Man's axes is that they can connect together into one longer weapon. That's a really fun little extra that I also wasn't expecting! 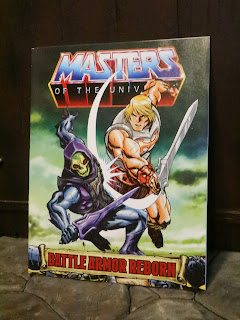 * The deluxe figures released so far all come with the same minicomic: "Battle Armor Reborn." It's a nifty little comic that features the four recent deluxe figures as well as Randor, Marlena, and Skeletor's robotic hover knights. The art is quite good and it just adds a nice little something to the overall package that mimics the vintage releases. 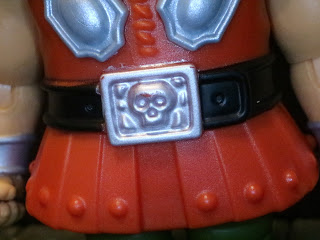 The Negatives:
* Ram Man's belt is really cool but there's some paint rub on the buckle right out of the package. That's a bummer, right? There's also some weird paint lines above his belt that are clearly some sort of slop. 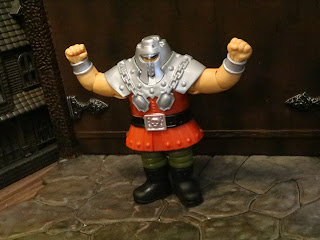 * Ram Man's arms have as much articulation as any other Origins figure but other than that he's fairly limited. He does have very limited swivel hinge knees but there's really not much that can be done with them. 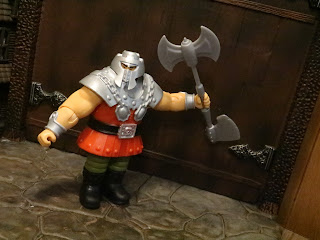 * Ram Man's one of my favorites and this guy would have been one of the best in the line if not for some of the weird QC issues and the useless knee articulation. Otherwise, I really like what Mattel did here. He's sold as a deluxe release and for the most part I think he warrants that. He's a Great and a 1/2 figure with lots of extras, two cool portraits, and the built in action feature. I love that he can really ram! It's cool to see some "new" stuff in here, too, like the double bladed axe and the ability to combine the axes into one weapon. Last year MOTU Origins felt like a simple retread or commemorative line but this year it's starting to establish it's own identity which I really like.
If you're a Ram Man fan I've also reviewed the 200x Ram Man, the M.U.S.C.L.E. green Ram Man and traditional pink Ram Man, the ReAction standard Ram Man and Ram Man (Mini Comic), the Loyal Subjects Ram Man, the Eternia minis Ram Man, the Hot Wheels Ram Man emblazoned '41 Willys Coupe 2002 #91, and the MOTUC Ram Man.
For more Masters of the Origins reviews check out the following:
Battle Cat
Beast Man
Clamp Champ
Evil-Lyn
He-Man
He-Man and Prince Adam 2-Pack
Hordak
Land Shark
Lords of Power
Man-At-Arms
Man-E-Faces
Mer-Man
Ninjor
Orko
Panthor
Panthor (Flocked)
Prince Adam & Sky Sled
Roboto
Scare Glow
She-Ra
She-Ra (PowerCon Exclusive)
Skeletor
Stratos
Teela
Trap Jaw
Tri-Klops
Zodac