Action Figure review: Keldor from Masters of the Universe by Mondo 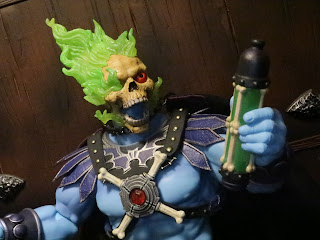 While Keldor was alluded to in the vintage minicomics the connection between Skeletor and Keldor wasn't fully realized until the Mike Young Productions animated series . To go along with that show and the 200x toyline Mattel released the first Keldor figure as an SDCC exclusive back in 2003. Ever since then Keldor has been a popular Skeletor variant. Currently there are two Keldors on the market; the Target exclusive Masters of the Universe Origins Keldor from the Rise of Evil 2-pack and this very cool 1/6th scale Keldor from Mondo's Masters of the Universe line. Today I'm checking out Mondo's Keldor, who went up for sale on April 13th. He sold out pretty quickly and was part of a fairly limited run of just 1,000 figures. While Keldor is a variant of Skeletor he has plenty of new pieces that make him a pretty exciting release and far more than just a repaint or a head swapped figure. This is the first Mondo MOTU release of 2021 so let's get things started after the break... 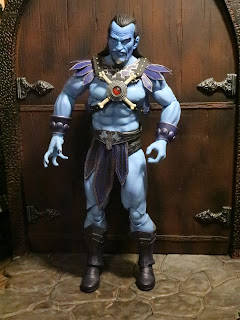 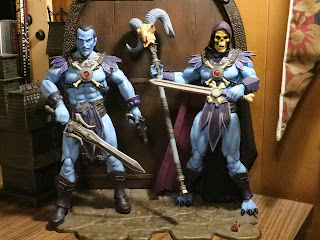 * Keldor is on the left while Skeletor is on the right. What's different? These guys do use the same bodies but Keldor has three all new heads, different bracers, and booted feet rather than the "demon" feet of Skeletor. The accessories are bit different, too, though Keldor comes with far less than Skeletor did. 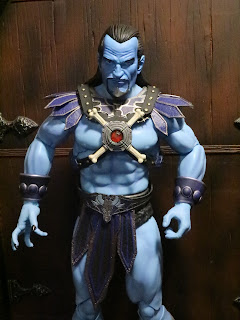 * Keldor uses the same base body that was first used with He-Man, but that's nothing new for the Masters of the Universe brand, is it? Keldor's colors and armor pieces are identical to Skeletor in most places but he's still a fantastic looking figure.  Like the original Mondo Skeletor, who Keldor is based on, this  is one massive, swole Evil Warrior! The mixture of a muscled base body with sculpted armor blends together nicely in this line. There's some nice shading to the muscles here and the armor has a very realistic look to it. 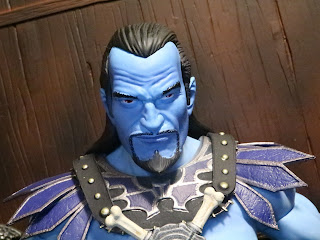 * Keldor is the son of King Miro and Saryn, a Gar, which explains why he has blue skin. Keldor's portrait takes most of its inspiration from the MYP/ 200x series and the MOTUC depiction of the character so he has long, straight black hair and a pointy goatee. He has a very dastardly smirk going on, too, which fits the character perfectly. 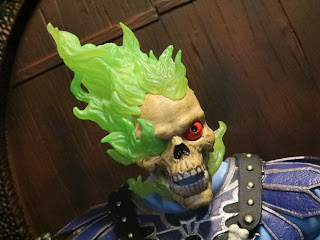 * My favorite of the three headsculpts included with Keldor is this one that depicts his flesh being burned off by acid. There's clearly some magic at work here as well as the acid seems like it's causing green flames of some sort. Yikes! The jaw is hinged, the flames are translucent, and that red eye is terrifying! This is one of the coolest Skeletor headsculpts ever and I'm just absolutely loving it. This is probably how I'm going to display the figure most of the time. 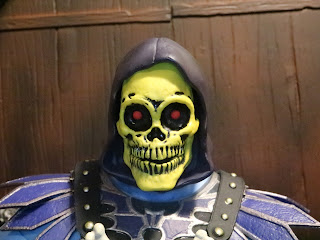 * The third headsculpt is a more traditional looking Skeletor portrait inspired by the art of Alfredo Alcala from the early MOTU minicomics. Alcala's art really helped to set the tone for the early years of the MOTU brand and the distinctive features of this skull (longer teeth, larger eyes, and lots of shading) really make for one of the creepiest depictions of Skeletor around. 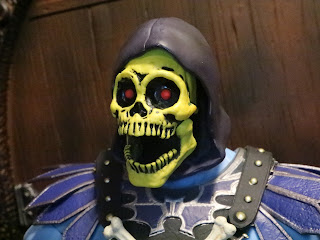 * Like the standard Mondo Skeletor this Alcala inspired head has an articulated face. The hood serves as the main "head" for the figure while the face is attached via a balljoint onto the interior of the hood. This allows Skeletor's skull visage to move around so he can look around without moving the head. He also has an articulated jaw. This is such a cool feature and I love how expressive it makes old bonehead. 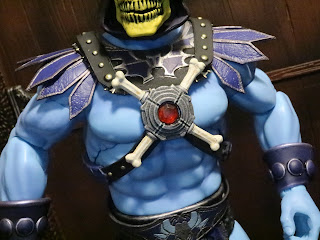 * Keldor has the same armor as Skeletor and, like his alter-ego, it's incredible. I love how many different paint applications it has, especially the red jewel in the center. It captures the best elements from so many different iterations of the classic Skeletor design but then ramps them up to the level you'd expect from some epic fantasy art. 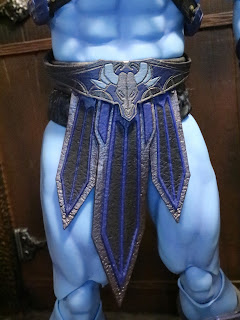 * Keldor also has the same Roman styled loincloth as Skeletor. Not only is there a very cool texture to this but there's also a rather intricately sculpted ram design on the belt. 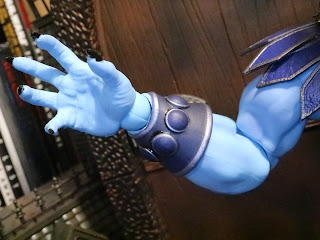 * Keldor's bracers are different than Skeletor's bracers. They're a bit simpler with rounded studs along the band. It's a cool look and does offer something different so you can create your ideal Skeletor or Keldor design. 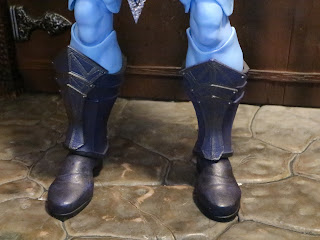 * Keldor has the same armored greaves as Skeletor but his feet are different as he now has standard booted feet rather than the clawed "demon" feet of Skeletor. It's another nice variation from the standard figure that should help you to create your ideal Skeletor if you have both figures. 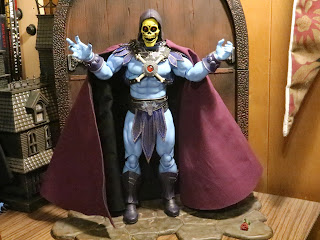 * Keldor comes with the same well tailored fabric cape that Skeletor had. It's double sided, so he can have a purple cape with black lining or a black cape with purple lining, and it has an actual metal chain that slips over his head. This is a really stunning piece and it suit Keldor nicely. 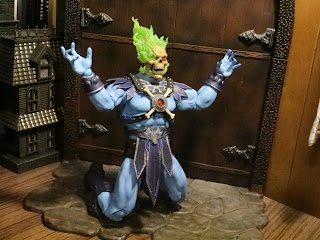 * Mondo's MOTU figures do not feel like your traditional 1/6th scale figure but more like oversized Masters of the Universe Classics figure. Keldor, like Skeletor, is heavy but very durable. I love how sturdy they feel. Mondo definitely has done a great job with the quality here and the articulation isn't bad, either. Keldor is extremely fun to pose. The joints stay together great but, if you push them to far, they do pop out rather than break. Customizers could have some fun with these, no doubt. 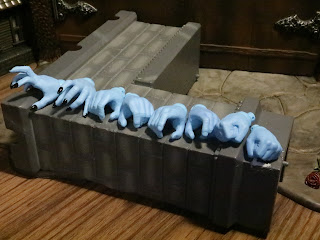 * Keldor comes with four pairs of hands: Some gesturing hands, standard grips, pistol grips, and fists. The wrist pegs are nice and thick and the hands are just a bit flexible making it quite easy to place accessories in them. 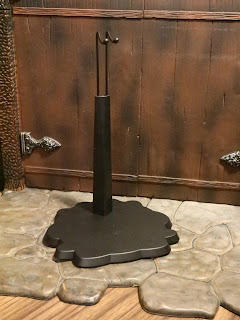 * While you probably don't "need" it, Keldor the same stand as every other figure: A black plastic display stand with a metal arm that rests under his crotch to keep him standing. It's not the best design for a stand but it works quite well for a heavy figure like this.The bottom of the stand has a stylized "M" for Mondo bit that's all the personality you'll find on this piece. 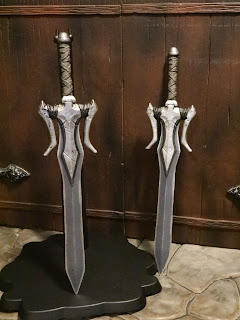 * Keldor comes with two copies of the sword that Skeletor came with although the decoration on the hilt is different. These are essentially two copies of Skeletor's half of the Power Sword. The paintwork is always really nice on Mondo's weapons and the sculpted detail is excellent. Keldor figures thus far have usually included two swords so this is a good inclusion for the figure. 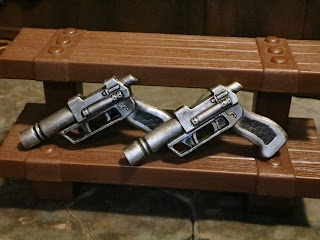 * Keldor also comes with dual pistols for him to wield. These are the same as the Filmation inspired pistol that came with Mer-Man but now you get two of them! 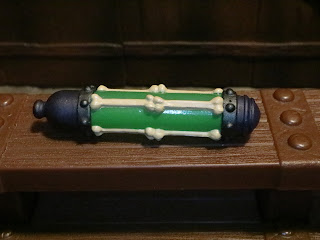 * Keldor's last accessory is the vial of acid that he attempted to kill Randor with. It's a new piece that looks pretty cool. I like the bone shaped structure protecting the acid vial and the bright green acid inside. 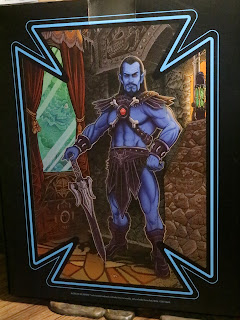 * Like the rest of the figures in the line Keldor's packaging is incredible and very collector friendly. It features a Snake Mountain themed slipcover and a magnetic five panel window box with new artwork of Keldor. The packaging design is by Brent Ashe while the artwork is by Florian Bertmer. There are some cool Easter Eggs in it like the burned Keldor image in the mirror/ portal, the Horde logo and what looks like the Grayskull rug on the bottom of the mirror/ portal, the vial of acid on the window sill, and the image of Battle Bons carved into the wall above Keldor. 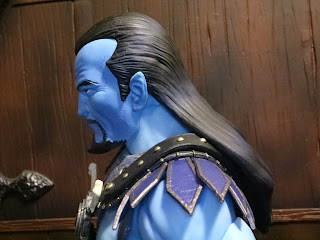 * Keldor has long hair and since it's molded from a harder plastic it kind of forces him to constantly be looking down. You can't really have him looking up much, either. It's not awful; just a little annoyance. 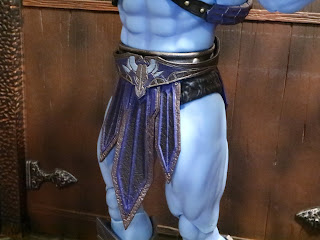 * On the previous figures I could pop off the torso at the waist to have the character wearing the standard trunks or swap out the loincloth/ belt piece. Here that doesn't seem to be the case. Am I just not pulling hard enough? 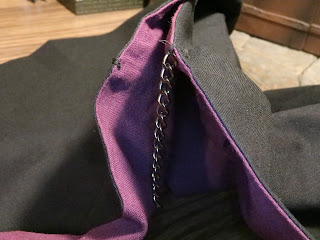 * While posing my Keldor the thread holding his chain broke off. I'm going to have to get my wife (who is an expert seamstress and quilter) to reattach it for me. 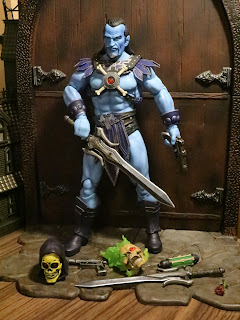 Keldor was released in a limited run of 1,000 figures and is a variant of Skeletor. That being said, while he does come with three very nice portraits (more than most other figures) he still feels a bit light. He doesn't come with a companion and has fewer weapons than the previous release. Plus, he's mostly reused. Had he sold at a lower price I would understand this but he's the same price as most other figures (or a bit more) and it feels like you're paying for his exclusivity. Is he a really good figure? Absolutely! The burning skull and the Alfredo Alcala inspired Skeletor head are incredible. It would have been nice to get some new accessories besides the acid vial, though. Perhaps Mondo's attempt at the combined swords of the 200x Skeletor or a new Havoc staff? He's a Great figure but not one of the strongest entries in this line. Hordak is coming soon, so we may have a new top dog on the block...