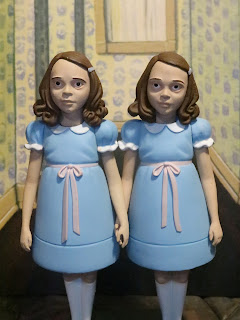 A weekend or two ago I was at Target and stumbled upon some new Toony Terrors from NECA. Y'all know I'm a pretty big Stephen King fan and I was thrilled to see that the Grady Twins are included in the most recent series of NECA's "horror icons meet vintage Saturday morning cartoons" line of action figures. Stanley Kubrick's The Shining might not be a very faithful adaptation of King's book but is sure is one heck of a movie. The film is filled with iconic imagery and the Grady Twins, the ghosts of two young girls who haunt The Overlook, are quite possibly more well known at this point than Jack Nicholson. They're pop culture fixtures and NECA has immortalized them in plastic to hang out with the big guns of horror. Now before some of you get all persnickety with me I'll go ahead and disclose that yes, in the book they're not twins. The girls are different ages. They also don't show up in the book and are only mentioned in passing. The Grady girls in this format are purely an invention of the movie. Second, there are some folks who are convinced that these are not the Grady girls (again, mentioned in the movie as being 8 and 10) but are some other twins haunting The Overlook. When the girls are mentioned as having been killed in the hotel and then their ghosts show up, c'mon? Why complicate things? These are the Grady Twins and we're getting ready to check these figures out after the break... 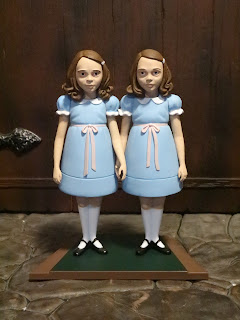 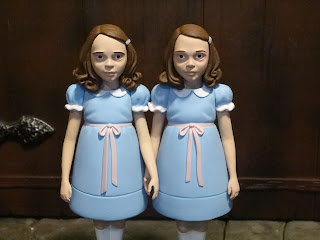 The Positives:
* The girls are two separate figures and they are slightly different. The girls in the film were played by real life twins and these two figures do look really similar but there are subtle differences. Their outfits have been simplified from the film with simpler, cleaner designs for their dressed. Remember that the point of this line is to imagine these characters as if they were part of a classic Saturday morning cartoon. 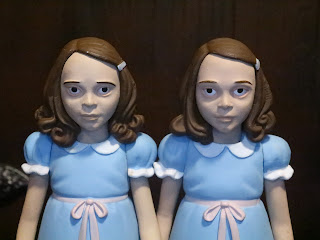 * The headsculpts are really good. If you didn't know who these were would they still be creepy? I don't know. The eyes are definitely a bit unsettling. The portraits are slightly different too, so NECA didn't just give you two of the exact same figure (which would have actually been OK in this instance) but went the extra mile to give change up the small details. * These aren't conventional action figures you'd pose and play with  and I doubt anyone plans to display them in any way but just standing together on their base but there are some joints here that allow you to move the figures a bit. They have swivel waists, ball jointed heads, and swivel shoulders. Want them to point menacingly? Go for it. 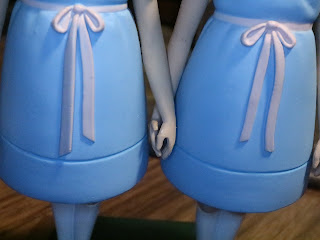 * I like how their hands are sculpted so that they can hold hands. That's a cool little detail and helps you to know which figure should be on which side. Do you imagine there's some kid somewhere whose family has no idea what The Shining is and whose family bought these for them to play with? Like maybe somewhere in Wyoming or something some grandma picked these up for her granddaughter who has them milling around in a dollhouse. That'd be weird, right? 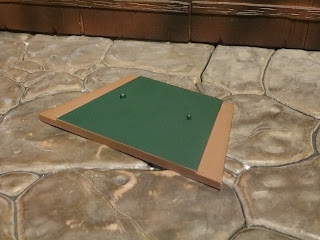 * One of the girls stands fine on her own while the other tends to tip. To rectify this NECA included a stand. Not only does it keep the Grady girls standing upright but it also looks like the hall where they appear to Danny. "Come play with us, Danny!" * The Grady twins come with a cardboard backdrop that you actually cut out from the back of the package. It's the hall from the film mentioned above. The design definitely looks like it could be the static background from a cartoon. These are kind of a fun touch that remind me of the cardboard backdrops that came with various toylines of the late 80s and early 90s, such as Monster Force. The Negatives:
* The paint is overall pretty good on these but one of the girls has some seriously rough scratching on her shoes. My kid messes her shoes up all the time so I can sympathize. 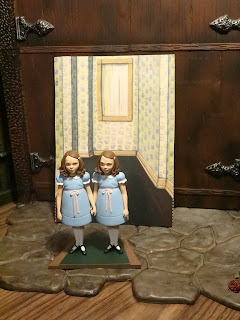 * Like with the rest of the Toony Terrors releases I'd really like for NECA to include a stand of some sort to hold up the cardboard backdrop. Seriously, just adding on a slit behind the hallway base would have been really nice so the backdrop could actually just stand up behind the figures. 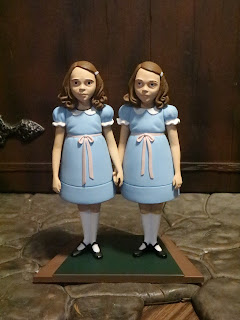 Listen, these are figures based on one of the most iconic images in horror cinema that you can pick up for $20 bucks for the set. They look creepy as all get out, they're functional, and they're absolutely going to grab the attention of anyone who see them who has any clue what they are. Heck, people who have no idea who the girls are or where they're from will probably be just as unnerved  as everyone else (except for Millie McGuffin from Wyoming who has them hang out with Ladybug and Moana at tea time). NECA did one heck of a good job on these and they're one of those things I never really imagined would exist. While they're not based on the book I'm still excited to display them on the bookshelf where I keep all of my Stephen King books and such. They can keep Danny, Jack, Carrie, Gage, Church, Pennywise, and Christine company. They're an Epic set and something I'm thrilled to own.
These are the first toys of the Grady Twins I've reviewed. For more Toony Terrors check out the following:
Ash
Freddy Krueger
Jason Voorhees
Leatherface
Michael Myers