Toy Review: Skeletor from Masters of the Universe Magnets by Monogram International 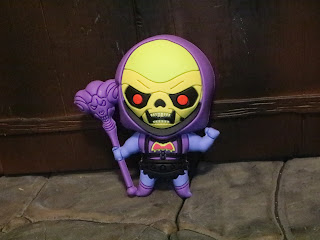 A couple months ago I reviewed two of the Masters of the Universe Magnets from Monogram International. These little guys are based on the Masters of the Universe Figural Bag Clips from 2020 and, like the bag clips, were sold in foil blind bags. Interestingly, the magnets have been appearing in little clear plastic bags as well. My parents were at an FYE a week or two ago and called me to ask if I had any of the Masters of the Universe Magnets as they had found some. I assumed they were referring to the blind bags but when they sent a picture and I was surprised to see the magnet visible. I've seen these at a Hot Topic as well so it seems they're being sold alongside other Monogram International magnets on little hanger tabs. I didn't have a Skeletor from my blind bag pulls so that's been rectified! Interestingly for this set Monogram went with the Battle Armor Skeletor design which was one of the "chase" variants from the Figural Bag Clips series. That's pretty cool! Let's take a look at this super attractive (Get it. Attractive). Skeletor magnet after the break... 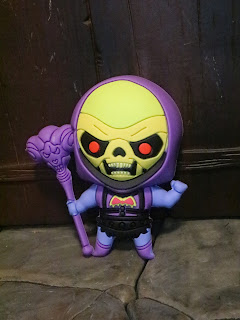 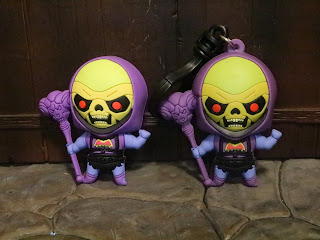 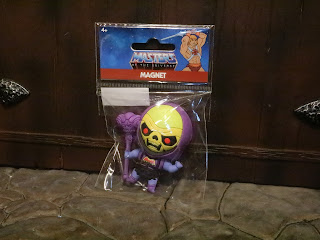 * Here's a shot of what the package looks like. I much prefer this to the blind bags although, thus far, I've only seen He-Man and Skeletor. I wonder if they've released Orko and She-Ra like this as well? I'm guessing the Glow-in-the-dark mystery Skeletor isn't part of this set and is reserved for the blind bags. 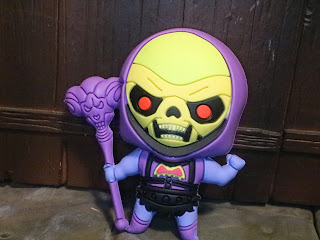 * Like the Figural Bag Clip, this magnetic Skeletor looks fantastic! It might be difficult to see here, but his "skull" has both green and yellow in it, like the vintage toy, and of course he's got the red glow inside of his eye sockets. Add that up with his all purple Havoc staff and his excellently sculpted armor and you've got a very cool piece to hang your most evil drawings on the refrigerator or your other favorite magnetic surface. 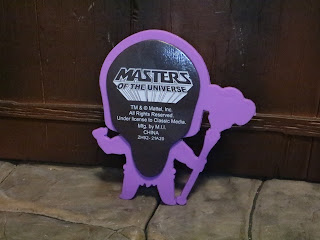 * Flip Skeletor around and you can see the magnet on the back. It covers a lot of space and seems fairly strong so you shouldn't have too much trouble getting these to stay on your fridge or whiteboard. 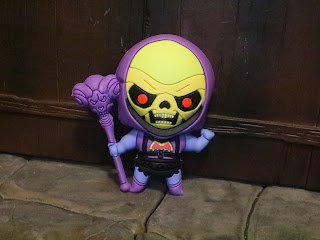 I love the Battle Armor variants from MOTU and this battle Armor Skeletor magnet is pretty cool. I especially like the fact that with the new packaging Monogram International is using you can just go up to the counter and grab the magnet if it catches your eye. And let me tell you this is a pretty eye-catching magnet. The design is really cool and I love the stylized design of this series. Skeletor gets a Great and a 1/2 from me. He's a cool little impulse buy item. FYE has been getting some crazy MOTU items lately (yes, I have the candy bars and the hot sauces) and you'll probably walk out with a bag full of goodies if you go there.
I've reviewed so many toys and action figures of Skeletor/ Keldor and you'll have to visit Snake Mountain for my entire archive!
For more reviews of Masters of the Universe Magnets check out the following:
He-Man
She-Ra
Posted by Barbecue17 at 5/15/2021