Malevolent May: Hordak from Masters of the Universe by Super7 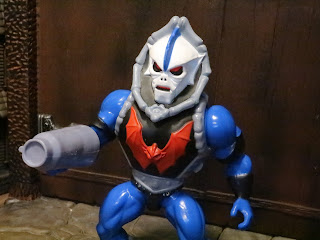 It's time for another installment of May 2021's Malevolent May, a month long tribute to Hordak, and today I'm checking out the 5 1/2 inch Filmation inspired Hordak from Super7's neo-vintage Masters of the Universe line. I reviewed most of this line as they were coming out but I didn't review all of the first series figures so let's begin to rectify that today with a look at Hordak. If you're not terribly familiar with these this was Super7's attempt at releasing vintage-inspired figures styled after the Filmation character designs. The line started off kind of rough with lots of problems with series 1 but by the end it was a really solid line that I hated to see end. This version of Hordak is based, of course, on his appearance in the She-Ra: Princess of Power cartoon so you can display him with your vintage Princess of Power line if you want. Catra needs some help! Let's take a look at Hordak after the break... 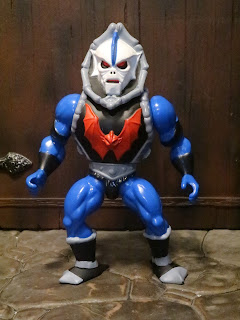 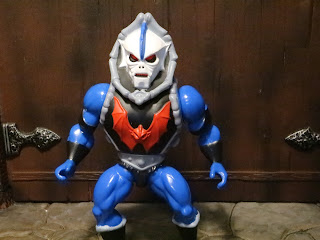 The Positives:
*  The aim of this line was to create Filmation styled vintage MOTU figures. It was a good idea and Super7 did a nice job of creating figures that look like what we might have seen in the 1980s if Mattel had based the MOTU toys on the cartoon, and not the other way around. They're big and bulky, just like you remember. Hordak's wearing armor like the vintage toy, though it's not really removable. His arms are a bit plainer than the Filmation design though he does have the arm bands (but with no Horde logos). 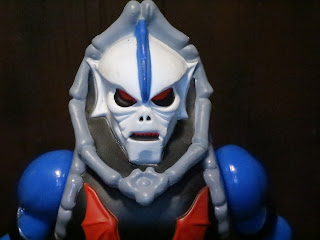 * Hordak has a pretty menacing headsculpt that captures the feel and design of the vintage toy but which captures the more angular and robotic appearance of the character's Filmation appearance. The red eyes look really intimidating! 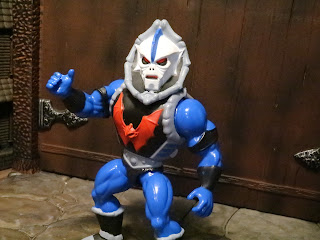 *  Most of Super7's neo-vintage figures feature spring loaded swivel waists. I still have no idea what sorcery causes these figures to be able to punch like this but it works pretty well. It's fun to have a genuine action feature in a MOTU figure again, allowing Hordak to swat at both his foes and his hapless minions. 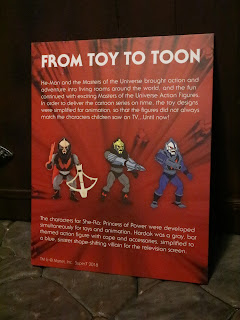 *  Another cool feature of this line is that each figure includes an art cards. The design kind of mimics the look of the minicomics and how they sat behind the figure in the vintage packaging but it's just a simple cardstock art print. On the front is a really cool image of Hordak by Emiliano Santalucia while the back features three images of the evolution of the character from toy to cartoon star. 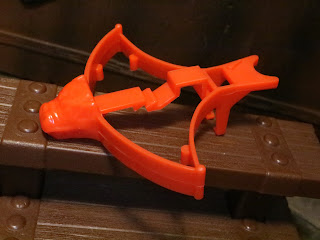 * I've never loved the crossbows of the vintage line but I get why Super7 included it here. It looks pretty similar to the vintage toy and is functional, too. The red is pretty awesome and just fits the figure better. 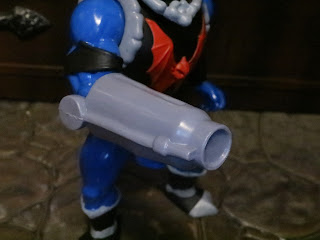 * To capture the Filmation version of the character Super7 also included a really cool arm cannon piece that fits over Hordak's right forearm. In the cartoon Hordak was a cyborg of sorts and could transform into different shapes. His arm cannon is probably his most well know armament and it really look like something that could have existed in the vintage line. 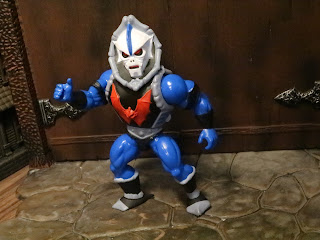 The Negatives:
* Hordak is one of the figures from the first series and, unfortunately, he has a lot of issues. The articulation is quite flawed as joints stick, he feels brittle and cheap, and the swivel/hinge hips seem to be completely fused. A lot of the Hordak figures (especially the ones that came packaged in a 2-pack with She-Ra) suffered breakage at the hips so I'm not forcing anything. This guy is just going to chill on my shelf. 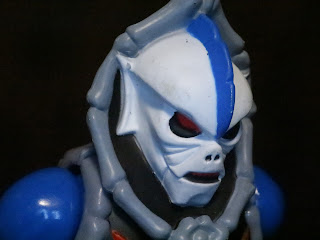 * The headsculpt might be nice but there are some weird paint issues going on. Around the edges you can see lots of errant gray splotches of paint while there are some weird dark smudges on the side of Hordak's head. They almost look like dirty fingerprints or like something dirty got mixed in with the paint. 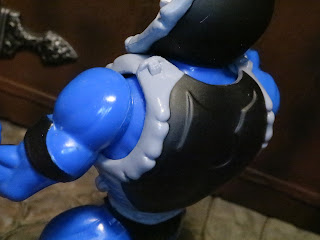 * Hordak probably has the basic body underneath his armor but you'll never be able to tell because his armor isn't removable. Well, not removable without breaking it. It's a 2-piece plastic shell like the vintage toy armor but the taps are really long. So long that there's no way to take this off except to snap the tabs. Why design the armor this way? 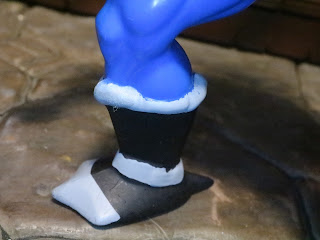 * There's more messy paintwork scattered about the figure. On his boots you can see some sloppy work on the boot cuffs and around the gray band on his ankle. 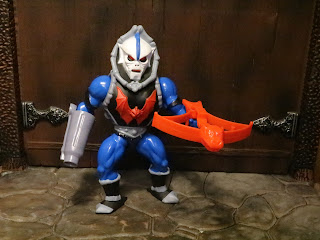 The line definitely improved overtime and was pretty impressive by the end of its run but the first series of Super7's Filmation based neo-vintage Masters of the Universe figures were kind of rough. Hordak might be the worst of the bunch and his various paint issues and faulty articulation warrant an Eh and a 1/2 rating. If you're keeping him carded or just want to have him stand on a shelf you'll probably be OK but anyone planning to pose this guy or possibly let a kid play with this should just skip him. The Origins Hordak is much better for those purposes. This guy can still be found at retail price which should tell you he's not terribly popular.

If you're a fan of Hordak then check out my reviews of the vintage Buzz-Saw Hordak, the Masters of the Universe Classics Hordak, "Buzz Saw" Hordak, and the Spirit of Hordak, NECA's Hordak staction, the MOTU Origins Hordak, the ReAction Hordak and Hordak (Grey),the Tweeterhead exclusive Masters of the Universe Legends Hordak maquette,  the Sonic kids meal Hordak, and the M.U.S.C.L.E. slime Hordak.