Action Figure Review: Stratos from Masters of the Universe Origins by Mattel 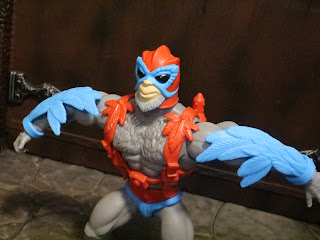 I'm currently finishing up my reviews of the fourth series of Masters of the Universe Origins figures and today I'm checking out Stratos, the Winged Warrior of Avion! Stratos was one of the original eight figures released in the 1982 Masters of the Universe line and now, with his appearance in series 4, we have the original 8-back figures. That's a pretty cool little milestone for Origins! Stratos had a few vintage variants, the most common being whether he had red wings and a blue jetpack or blue wings and a red jetpack. For the series 4 figure Mattel went with the blue wings and red jetpack which is the same as the vintage Stratos figure I own. I've never been a huge Stratos fan and about the only time I've ever found him overly interesting was during the 200x era due to his characterization in the Mike Young Productions animated series. Still, I'm not passing him up, so here he is! Let's take flight with Stratos after the break... 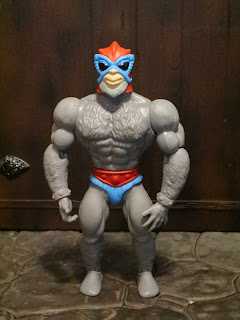 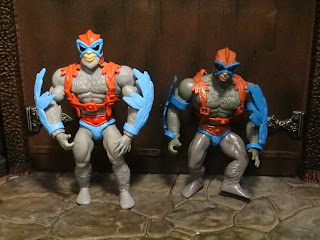 * The MOTU Origins Stratos is on the left while the vintage Stratos is on the right. The designs are quite similar with the most noticeable difference being the brightness of the colors. The Origins figures overall are quite brighter as you can see from the picture. The wings on the Origins Stratos also only attach at the wrist rather than having a bicep band as well. 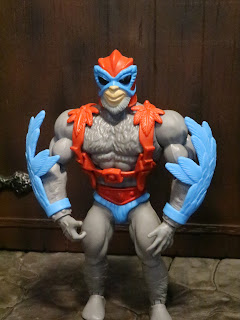 * Stratos looks like Stratos, so that's a plus. Despite not being the biggest Stratos fan I do like the look of the figure. The brighter colors look good on him and I'm glad he has the "hairy" body design all over (Zodac was missing the hairy torso). The red and blue paint highlights and accessories definitely add a nice splash of color to the figure and all of the expected details are present. I really like the look of the feathers on his shoulders straps. It's an interesting design choice that has always added a little bit more something to the figure. The early Mark Taylor designs for the character, dubbed "Wing Man" or "Bird Man," were much cooler than what we got, however. 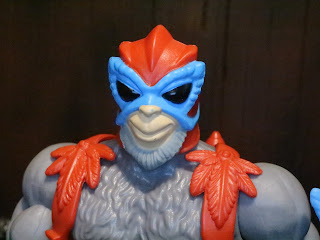 * Stratos' headsculpt is pretty good. It's a little more exaggerated than the vintage figures but I like it. It just has more character to it than most Stratos figures. The beard stands out quite well, too. 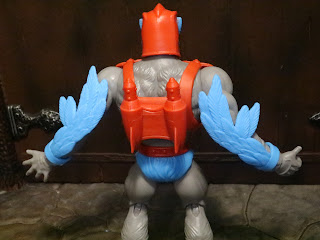 * Stratos' jetpack and his wings are really part of his look rather than being extra items for him but they look pretty good in this faux vintage style. The wings are easy to pop on and off and they only attach at the wrist so you can still use all of Stratos' arm articulation. The jetpack looks good, too, and the harness is flexible, durable, and easy to take on and off. 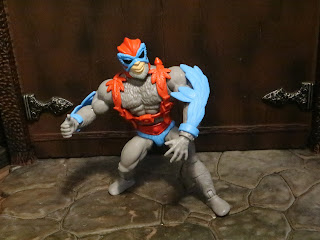 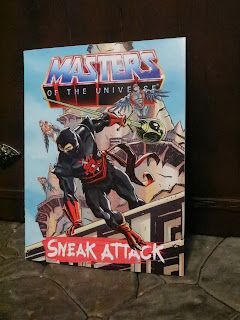 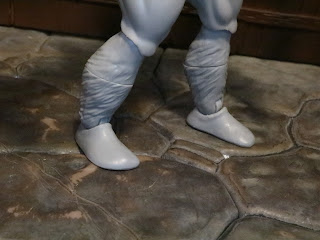 The Negatives:
* Like Beast Man, Stratos has plain feet that just look like he's wearing socks or footie pajamas. I don't think anyone would mined if they had gone with a more animal-like foot to use on Stratos and Beast Man, or at least a foot with more detail. 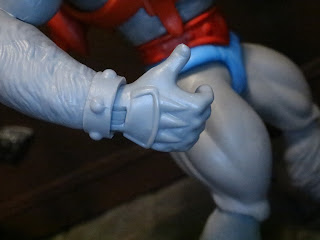 * I really wish Mattel would have added a paint hit to the cuffs on Stratos' wrists and to the claw on his right hand. It's a minor upgrade that would have been nice to see. Little things like this go a long way towards making this line feel like a celebration and evolution of the vintage line rather than a cheap cash in. 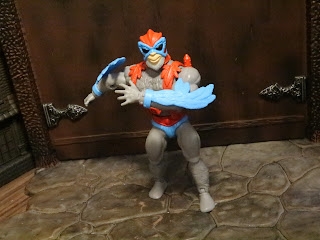 Stratos gets a Good and a 1/2 from me. He's not a bad toy and if you're a Stratos fan who likes the aesthetic of this line then the odds are that you'll love him. I like him but find him a bit dull. he really could have been spruced up by having some extra paint applications and maybe coming with an accessory. It's been pretty popular for Stratos to come with some form of the Staff of Avion over the past few years but here he has nothing but his wings. Dull! I want these to bay tribute to the vintage line but not faithful to a fault. Little improvements are very welcome.

If you're a Stratos fan then check out my review of MOTUC minicomic inspired Stratos, Trap Jaw, and Prince Adam, the M.U.S.C.L.E. green Stratos from series #2, the minifigure Stratos from the 200x Heroes Vs. Villains Gift Pack #1, the Mega Construx Stratos and the Mega Construx Heroes Stratos, the ReAction Stratos (Blue Wings), the deluxe Play Set from Colorforms, the Monogram International Stratos bag clip, the Club Grayskull Stratos, and Super7's Neo-vintage Stratos.