May 2021 is Malevolent May at Action Figure Barbecue! 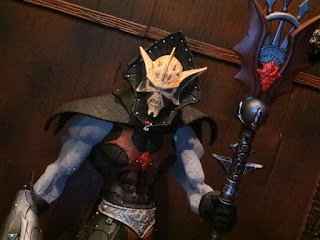 Uh oh! A dark shadow falls over Action Figure Barbecue this month! That can mean only one thing: The Horde is here and Hordak is with them!
This month I'll be doing a monthlong tribute to Hordak, the ruthless leader of the Evil Horde. Released in 1985 Hordak served both as the leader of a new faction for He-Man to battle in the Masters of the Universe toyline and as the main antagonist of She-Ra and the Great Rebellion in Filmation's She-Ra: Princess of Power.  Mattel and Filmation developed Hordak together so he's equally a part of both of those MOTU incarnations. The Battle Ram Blog has an excellent history of the development of Hordak and I'd encourage you to check it out!
For He-Man/ MOTU Mattel used the storyline that Skeletor had once been Hordak's apprentice until Skeletor trapped Hordak in another dimension. When Hordak escaped and brought his evil Horde with him he was determined to rule Eternia, fighting against both the Heroic Warriors and Skeletor and his Evil Warriors, thus adding a third faction into the mix. Hordak is much more of a magic wielder being an ancient, evil wizard. For She-Ra/ PoP, Hordak is the leader of the Horde's techno empire on Etheria, though he's not the top dog; there's also a Horde Prime elsewhere in the galaxy.
This month I'm to be looking at quite a few different Hordak items! I hope you enjoy this celebration of one of the MOTU A-listers! To get started here are some Hordak reviews I've written on the site previously:
Masters of the Universe by Mattel (1982)
Buzz-Saw Hordak
Masters of the Universe by NECA (2005)
Hordak
Masters of the Universe Classics by Mattel (2008)
"Buzz Saw" Hordak
Spirit of Hordak
Masters of the Universe: ReAction by Super7 (2015)
Hordak
Hordak (Grey)
M.U.S.C.L.E. Masters of the Universe by Super7 (2015)
Trash Can Wave 4 (Slime)
She-Ra and the Princesses of Power by Sonic/ C3 (2020)
Hordak
Posted by Barbecue17 at 5/01/2021