Malevolent May: Hordak (Tweeterhead Exclusive) from Masters of the Universe Legends by Tweeterhead 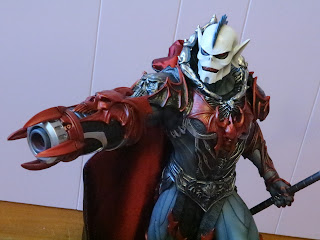 Sideshow's series of 1/5th scale statues is definitely one of my favorite range of Masters of the Universe products ever. Sideshow started the line in 2016 and released their last statue, Orko, in late 2018/ early 2019. During their time they released He-Man, Skeletor, She-Ra, Orko, and two versions of Evil-Lyn. Last year Tweeterhead announced that they were continuing the line in the same scale and style and their first release was Hordak. Hordak went on sale last year in both a standard edition and as a Tweeterhead Exclusive with a run of 300 and he just shipped at the end of March for folks who preordered him through them directly. There has been so much MOTU stuff lately that it's taken me a bit to get around to it all but I figured this guy should kick off Malevolent May since this might be the greatest Hordak collectible ever! I'm using the back of my daughter's playroom today since Hordak is so massive and mighty that he just won't fit in my usual photography area. The colors are kind of Etheria-ish, right? Let's take a look at the Tweeterhead Exclusive version of Hordak from Masters of the Universe Legends after the break... 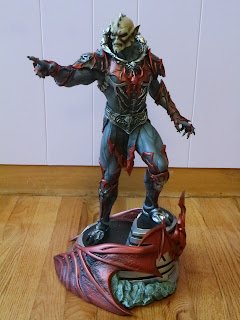 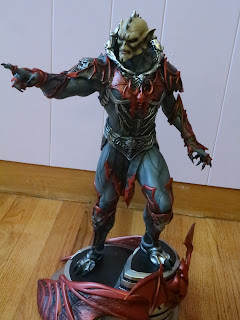 The Positives:
* While he's a 1/5th scale statues (or "maquettes") Hordak feels enormous and is incredibly heavy! Besides being awesome interpretations of the MOTU characters the thing I love best about this line (starting with Sideshow and continuing under Tweeterhead) is that these are different interpretations of the cast. A lot of licenses MOTU merchandise just reuses the character designs from the Filmation cartoon or the vintage toyline and while that's definitely not a bad thing it's cool to see some new blood in the line. If a Masters of the Universe movies had character and costume designs like this it would be amazing! Hordak is sculpted climbing up a step on a Fright Zone inspired base. The statue comes with extra parts you can swap out to mix things up a bit but the most basic pose has Hordak looking to the right and pointing his hands out to either his long-suffering minions or his unlucky foes. 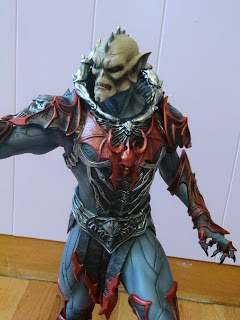 * The Tweeterhead Exclusive version does come with a Filmation inspired head bit we'll get to that in a moment. The basic statue is very much based on the vintage toy's design and features a grey body or costume covered with black and silver armor with lots of red Horde emblems. The sculpting is gorgeous, as is the paint, and you'll find yourself marveling at all of the cool details. This is MOTU rendered in an epic fantasy style and it's just such an amazing look for the property. 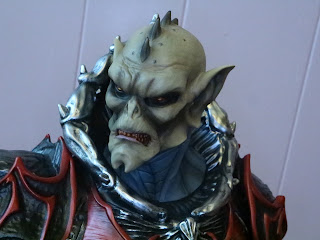 * Hordak's head is an interesting blend of bone and flesh. At first it definitely looks somewhat skull like due to the colors and the spiky ridge on his skull and the forked chin but the more you look the more you see the features of organic flesh. It's something you'd expect to see on a very inhuman rendition of a vampire. The bat-like ears, tiny, pointed teeth, and dark eyes are brilliant and make for a very fearsome interpretation of the evil techno- mage. 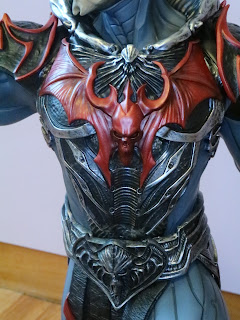 * The armor is clearly meant to be metal but there's a great almost organic look to it, too. The way it's designed in places kind of reminds me of Dracula's red battle armor in Bram Stoker's Dracula. I know Hordak's look was inspired by a traditional tribal mask but I've always felt that he has a vampire inspired look to him and this design really captures that feeling. 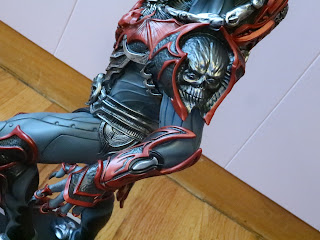 * Hordak's arms are covered with some wicked looking armor. He's got armored gauntlets, cool rings, and some very creepy pauldrons. The paulrons are removable (they are held on by magnets) and are used to hold his cape in place. I'll get to the cape in a moment. 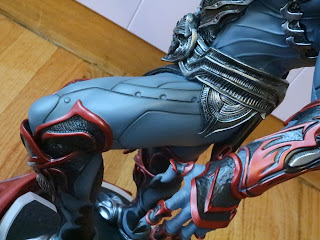 * Check out Hordak's body! While the vintage toy and minicomic designs for Hordak don't hint at a robotic nature the Filmation cartoon absolutely went with the idea that Hordak was mechanical in nature. I've always taken him as a bit of a technomancer and I like the way his bodysuit (or heck, maybe his actual body) has a bit of a designed look to it. 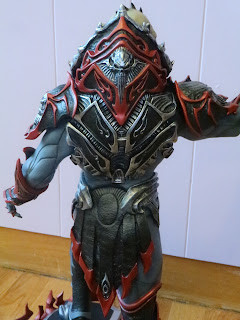 * Here's the back of Hordak's armor and, wow, does it looks as amazing as the front or what? There's a ton of detail here. I love the big, creepy, armored hood this guy is wearing! 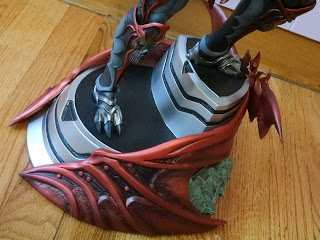 * He's also rocking some seriously wicked boots. I think KISS might call Hordak for some fashion advice when they go on tour for their next farewell tour! 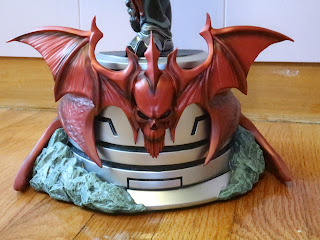 * Hordak's base has an amazingly cool giant Horde bat emblem on the front. It's attached via a magnet and really makes for an impressive addition to the statue. The base itself is a mixture of engraved metal cylinders and rock, giving off a Fright Zone vibe. 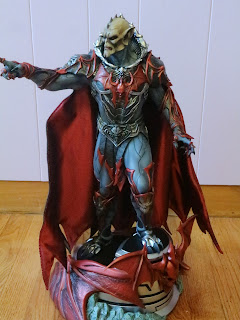 * Now let's talk about the extra pieces you can add on to the figure to make it even cooler. First up is Hordak's cape. This is a superb double-sided cape with a wire inside for posing! It just looks fantastic and really completes the loom of the figure (although he looks fine without it and some collectors will definitely want to display him that way). The cape has loops that fit on the magnetically connected pauldrons so that it stays in place securely and fits very naturally. 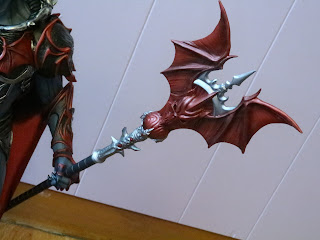 * Check out Hordak's staff! This really looks like his staff from the Mike Young Productions cartoon and the NECA stactions series which up until now was probably my favorite depiction of Hordak. The detail is awesome here! Those little points and barbs sure look sharp, don't they? 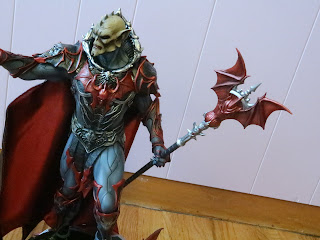 * Hordak's left hand is attached via a magnet and the hand holding the staff is a separate hand. The hands swap out easily, stay on securely, and look very natural on the statue. It's so cool to have so many options to display this guy with! 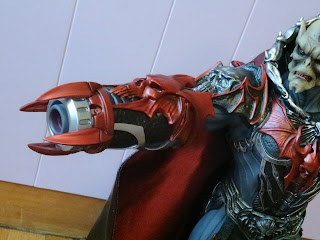 * The Tweeterhead Exclusive Hordak actually came with a secret accessory! It's his laser cannon arm from the Filmation series! This is a very, very impressive extra and you just swap it out magnetically, just like his left hands. The work on this is amazing! I mean, holy smokes! 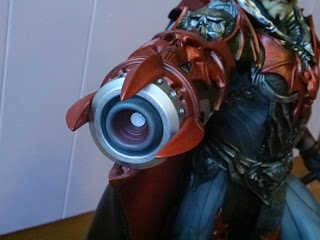 * Here's a look at the last thing at the barrel of the laser cannon! 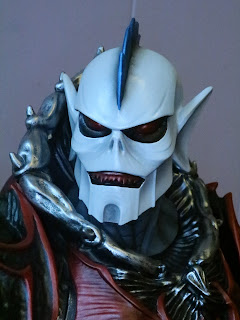 * Last and in no way least is the Tweeterhead exclusive Filmation inspired "robot" head. I really wasn't sure that I was going to use this head at first as I like that these statues have kind of done their own thing rather than using the Filmation designs but, wow. This is amazing. It's honestly my favorite of the two head sculpts. The detail work is excellent and it still manages to capture the coolness of the Filmation look while making it fairly creepy. Those eyes and teeth are just killer! 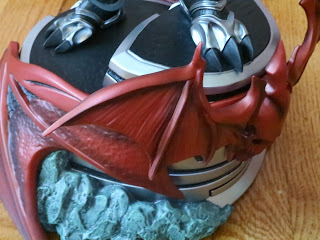 * This isn't so much of a negative as a warning but just be careful with the wings of the Horde bat logo on the base. If you're going to reposition or move the statue make sure to remove the Horde emblem. Otherwise, you might catch the wing on something and snap it. It seems like it could be a bit fragile. 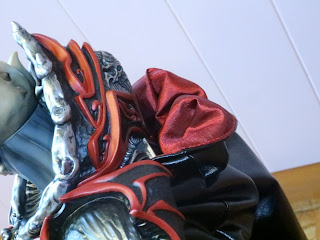 * Hordak's cape does have a hood but it isn't really functional. It also doesn't look particularly impressive just sitting there pulled down, either. The statue probably would have looked better with the hood removed from the cape with the sculpted collar drawing all of the attention. 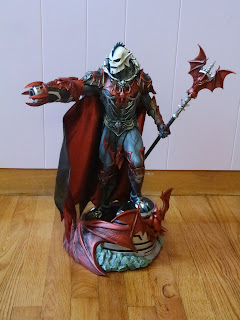 Is this the best rendition of Hordak ever? I think so. Yeah, I'm kind of setting the bar pretty high this early into Malevolent May but what can I say? If you're going to celebrate Hordak this is the way to do it. I really like Tweeterhead and I'm thrilled that they've done such a great job with their first release in this line. Their statues are expensive but the limited run (at least for the exclusives) and the quality of the piece outshines the price. The fact that you can display this so many ways is really incredible and makes it seem like a worthwhile piece. These guys are now selling for crazy prices so don't sleep on future Tweeterhead releases if you have any interest in them. They've got Hordak's Minion and Teela coming in the future! This guy is pure Epic and an excellent continuation of one of the greatest Masters of the Universe lines of them all. I hope the Masters of the Universe Legends line has a long life with Tweeterhead at the helm!

If you're a fan of Hordak then check out my reviews of the vintage Buzz-Saw Hordak, the Masters of the Universe Classics "Buzz Saw" Hordak and the Spirit of Hordak, NECA's Hordak staction, the ReAction Hordak and Hordak (Grey), the Sonic kids meal Hordak, and the M.U.S.C.L.E. slime Hordak.