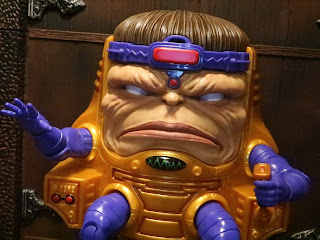 Many of you regular readers know that I've collected Marvel Legends on and off for years (my first Legends review was back in 2013 but my first purchase of one was the original Toy Biz Marvel Legends Series IV Punisher) but lately I've been really impressed with them and keeping up with many of the current releases. I've long been known as a DC guy and honestly hadn't read many actual Marvel comics until this year but lately I've been reading a lot of the classic stuff and loving it. As a kid I went back and forth between being nuts about Marvel and Toy Biz's releases, especially X-Men and the Iron Man lines, and being nuts about Batman and whatever Kenner was putting out at the time. I distinctly remember one time in 1995 when I was dead set on obtaining Modok and War Machine from the Toy Biz Iron Man: The Animated Series line and I ended up getting both at Target while on a shopping trip with my mom. I still have that M.O.D.O.K.! He's just so strange and wonderful! I'm not a huge fan of the character necessarily but I love his wonderful design that's filled with the magic of the Stan Lee and Jack Kirby era. Toy Biz made M.O.D.O.K. a build-a-figure in 2006 for the original Marvel Legends line so it's definitely time for an upgrade. Rather than go with M.O.D.O.K.as a build-a-figure this time around Hasbro opted to make him a deluxe release. I'm not going to complain about that as it made him easy to pick up in one swoop. Let's take a look at Hasbro's M.O.D.O.K. after the break... 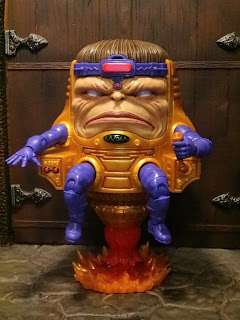 Height: 8 3/4ths inches including the his hoverchair. 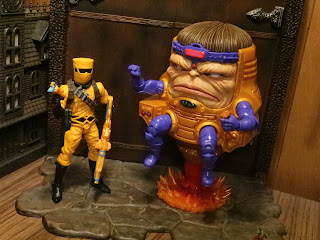 * M.O.D.O.K. is sold for around $50 (you can probably find him a few bucks cheaper or on sale if you shop around) but he's a pretty decently sized figure that's quite a bit larger than your average Legends figure. He actually comes disassembled in the package which makes me wonder if Hasbro intended for him to be a build-a-figure at some point? He would have been a popular one but I respect Hasbro for giving him to us in one go. He makes all of those various A.I.M. troopers and such much more desirable as well, doesn't it? 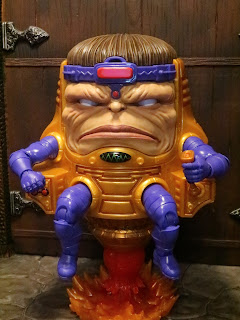 * M.O.D.O.K. looks fantastic. Hasbro really captured the bizarre proportions of the character and his colorful, classic sci-fi inspired design. It's a great looking classic M.O.D.O.K.! Modok's armor/ hoverchair is molded in a metallic orangish-gold plastic that really stands out on the shelf. It's that swirly looking plastic that sometimes I dislike but here I think it looks good. It's very fitting for M.O.D.O.K.. His limbs get attached into the basic shell and their darker purple color really contrasts nicely with the orange. 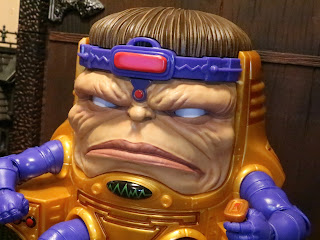 * That's a pretty crazy looking face, isn't it? M.O.D.O.K., AKA George Tarleton, has a seriously oversized head that makes him look like a weird amalgam of the villains from the Dicky Tracy film. His features are excellent and those white eyes actually make him even creepier! He's sporting his headband which helms him to focus his mental energies as well, and it looks incredible. The sculpting is just excellent here and the paintwork is top notch. 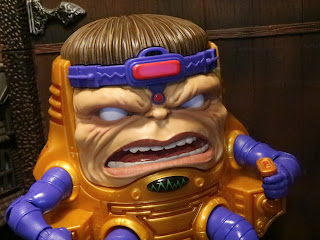 * M.O.D.O.K. comes with two faceplates which are quite easy to swap out. They just pull out of the front of the body! The second faceplate has a wonderfully angry expression on it that makes M.O.D.O.K. look like he's in the middle of battle or yelling at his hapless minions. You tell them, M.O.D.O.K.! That's some impressive work on his teeth, too. Hasbro did an excellent job with the second portrait. 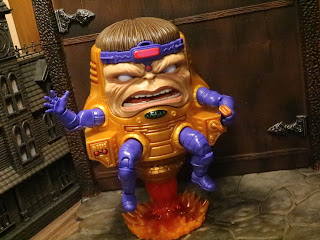 * Since his body is really bizarre M.O.D.O.K. doesn't have articulation like most other figures. His limbs are as mobile as any others, though, and you can move them to get some "poses" out of him. It's fun to try to get some different expressions out of such an unusually built figure! 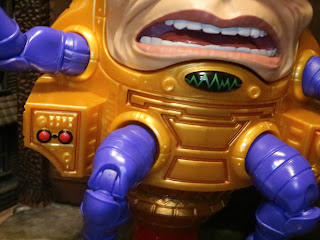 * The hoverchair design has some nice dark paint highlights that help the details to pop a bit more and the various little computer panels are very Kirbyesque. M.O.D.O.K. is a really fun figure to look at and makes a great centerpiece figure for a display on your shelf. 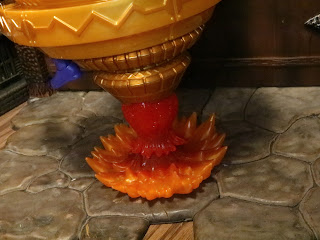 * M.O.D.O.K.'s hoverchair keeps him floating and he's got a jet of what looks like flames (oh, please let those be flames...) shooting out from the bottom. The top part of the flame burst/ repulsor (the red part) is attached to the jet via a balljoint while the bottom part, which is more orange and functions as a base, is removable. You do need the base to keep M.O.D.O.K. standing but you could take it off if you wanted to suspend him in some other way, perhaps by using fishing line or something. 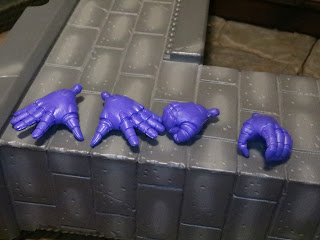 * M.O.D.O.K. comes with four interchangeable hands: Two open palms, a right fist, and a left grip for holding the joystick of the hoverchair. 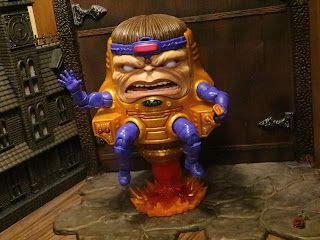 M.O.D.O.K. is a pretty impressive toy and a really nice looking Marvel Legends figure. Hasbro did a nice job on him and I'm kind of glad that he was released as a standard release rather than as a build-a-figure as acquiring him was a bit easier. That being said, I do think he might be a bit overpriced. I get that this is a mold Hasbro probably can't get much mileage out of but some extras like an energy effect for his headband or a few more hands would have been nice (he really needs a pointing hand!). Still, I'm giving him a Great rating. He's just a fun, colorful bad guy for your shelf who feels truly unique.