Action Figure Review: Stephanie McMahon from Masters of the WWE Universe by Mattel 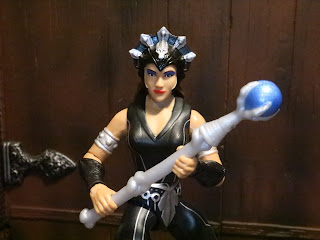 So far Becky Lynch is the only figure I have managed to find from the fifth series of Mattel's Masters of the WWE Universe line but I've now found all of series 6. I've reviewed Goldberg previously so let's move on to Stephanie McMahon, the "Evil Billion Dollar Skull Queen." While I would have preferred Alexa Bliss as an Evil-Lyn homage gear Stephanie McMahon definitely makes sense. Not only is she an established name and part of the McMahon dynasty but she also partners with the Skull King Triple HHH from series 1. She's also legitimately dressed in an outfit sort of similar to this so it really is a good fit for Stephanie McMahon. Are we destined to get Vince McMahon as King Grayskull someday, too? Let's check out what we have for now and what we've got is Stephanie McMahon as Evil-Lyn. Enjoy it after the break... 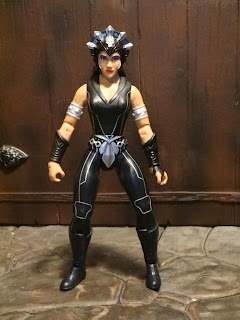 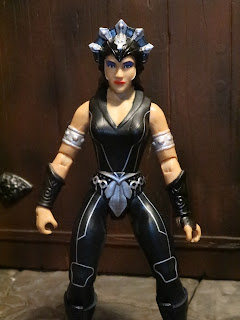 * Stephanie McMahon's outfit is a mixture of the standard wrestling pieces we saw on Becky Lynch in series 5 and the Teela/ Evil-Lyn body from Masters of the Universe Origins. It makes for a pretty cool looking outfit; sort of a sleeveless jumpsuit with an elaborate belt and the bicep cuffs and bracers that most of the MOTU ladies sport. The black and silver color scheme definitely looks like something you could see Evil-Lyn wearing and I'm sure collectors buying this just to augment their MOTU collections will find some cool ways to customize this. 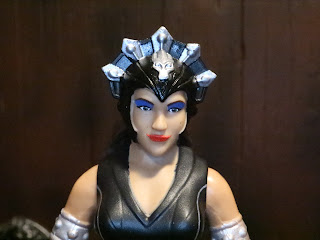 * The headsculpt is good. The face is OK. I'm not sure that it looks all that much like Stephanie McMahon but it's a standard looking female face with fairly clean paint applications. For this kind of figure I'm not going to knock the fact that it looks a bit generic. The headpiece is really nice with excellent detail. It's actually more impressive than Evil-Lyn's. Stephanie's long hair is flowing out the back, too, but you can't really see it in my pictures. It's there and I'm sure some folks will paint it white to turn this into an Evil-Lyn variant. 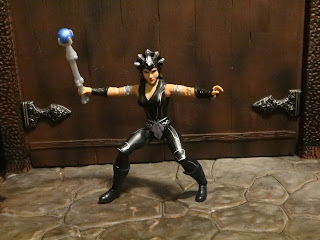 * I like the articulation used on the female MOTU Origins body. It's quite good, maybe even with smoother articulation than the male body. This is the first use of the female body in the MOTWWEU line and it works just fine here, too. In fact, the fact that she's sporting pants makes the awkward knees of the sculpt less of an issue.
* Just like the male figures in the line the women are also modular and the limbs, torso, and head can be easily separated to make your own lazy boy customs! 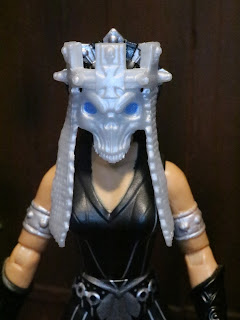 * Stephanie McMahon actually wore this mask in 2016 at WrestleMania which is kind of cool. It's not just made up for the MOTWWEU line. It looks great and fits over her face really well giving you another way to display her. The eyes are even given a paint hit to make them look like they're glowing blue! 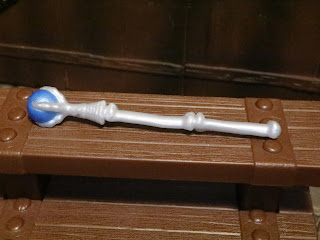 * Steph's wand is also cooler than Evil-Lyn's! It's very similar but the shaft is made of bones. She is the skull queen, you know. Seriously, how cool? I've seen some speculation that this might have been tooled for an upcoming Evil-Lyn figure based on new media but I really think this was made just for this figure. The minicomic calls it the Crystal Ball of Chaos! 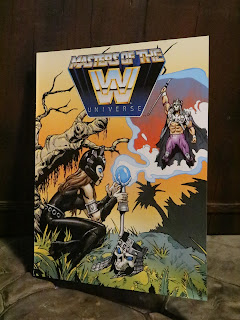 * The cover of Stephanie McMahon's minicomic shows her kneeling on the ground and using her wand to conjure up an image of Triple H. It's actually an homage to the vintage Evil-Lyn cardback which is pretty cool. Inside is a one page comic and information about the Skull Queen's place in WWEternia. 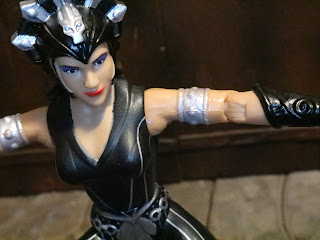 * There's some rough paintwork on the edges of Stephanie's outfit as well as on the bicep cuffs. You can see her skin through the silver. 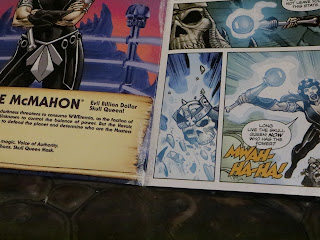 * The minicomic has glue or something inside that made the pages stick together. It tore up some of the print when opening it. Weird, huh? 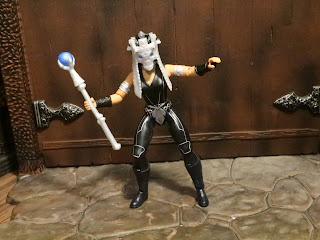 I really like this line and even if you're not a WWE fan there's a lot of coolness that can be used in your regular Masters of the Universe collection. Stephanie McMahon could be used as the basis for a great Evil-Lyn custom or as another sorceress on Eternia. Her wand is excellent and really makes for a very cool accessory. While these aren't the most impressive action figures on the market they're fun toys with a lot of cool features, particularly the swappable body parts. Stephanie McMahon is a Great figure and I'm curious to see how others use her in their collections.