Action Figure Review: Tri-Klops from Masters of the Universe Origins by Mattel 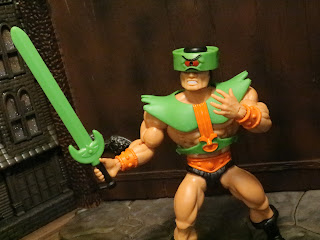 Today I'm checking out the last figure from series 4 of Masters of the Universe Origins and it's one of Skeletor's most loyal warriors: Tri-Klops! Despite not being one of the original eight characters in the line (he was released as part of the second series in 1983) Tri-Klops definitely "feels" like he's always been a part of Masters of the Universe. That's why it's so odd, then, that I never owned him as a kid. Despite not really being into MOTU until around 1985 and 1986 I had most of the 1982 and 1983 figures but I never owned Tri-Klops. My first Tri-Klops figure was actually the 200x version. I love the guy, though, and he just has a wonderful classic MOTU feel to him. MOTU Origins is definitely making sure to knock out as many figures as they can who use the basic bodies so Tri-Klops was guaranteed sooner rather than later. Let's take a look at the master swordsman who is "Evil & Sees Everything!" 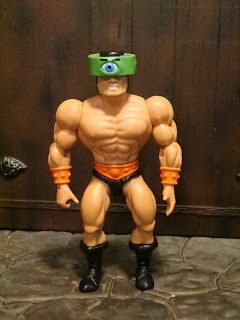 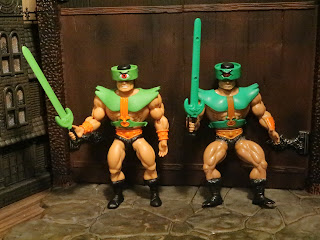 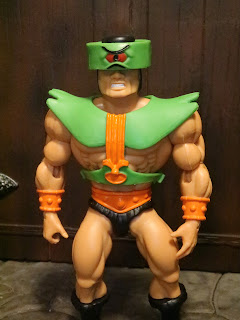 The Positives:
* Tri-Klops looks pretty slick. I like the brighter green as it really makes him stand out quite nicely. His armor is nicely sculpted and fits the figure well. All of the paint applications on places like his armored bracelets and his belt are clean and sharp. He's a pretty cool looking figure. 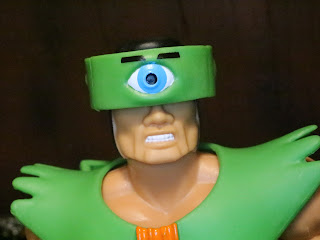 * Tri-Klops' has a pretty good headsculpt although you can't see his entire face as his eyes and forehead are hidden under his visor. His mouth looks pretty good, though. He looks like he's in the middle of battle or perhaps like he just saw something he doesn't like. It's kind of a cringe, I guess. The visor has three different eyes on it with the appropriate "eyebrows" at the top. But does it spin like the vintage toy? 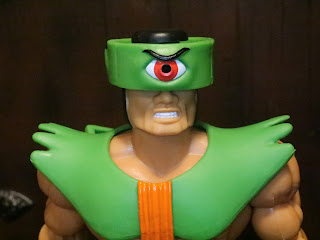 * Of course it does! Tri-Klops' visor rotates revealing his three different eyes each with their own powers. There aren't sculpted eyes (or eye sockets) underneath the visor like on the Masters of the Universe Classics Tri-Klops but I didn't really expect there to be. 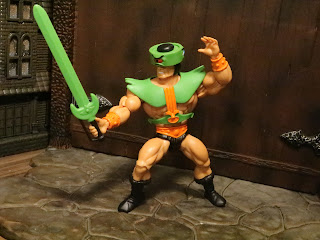 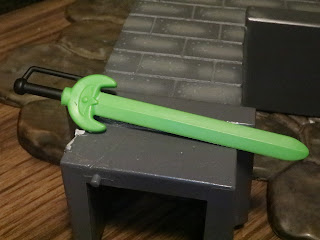 * Tri-Klops comes with his green broadsword with a panted black handle. It's quite similar to the vintage accessory and fits in his hand really well. I presume Tri-Klops will also get this same sword but molded in purple, right? 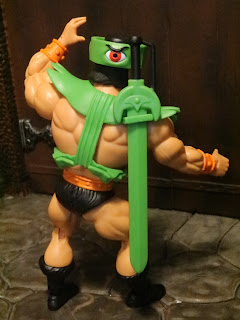 * Tri-Klops has a slit in he back of his armor which allows him to carry his sword. I love little features like this! 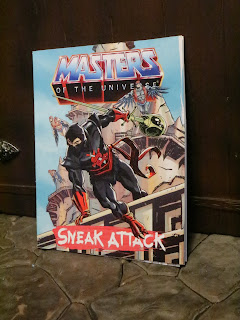 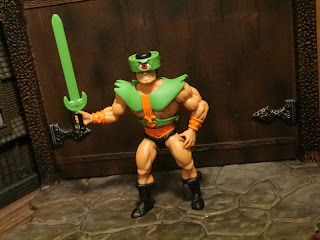 I'm actually pretty thrilled with Tri-Klops. So long as you like the style and aesthetics of Masters of the Universe Origins then there really isn't anything not to like here. He looks like an upgraded version of the vintage Tri-Klops! He's got the great color scheme, the rotating visor, and a cool sword with a place to store it. Throw in the minicomic, the articulation, and the swappable body parts and Tri-Klops is another hit. I've give him an Epic rating. If you find him at retail then you've found a jewel. I still like Ninjor a bit better from series 4 but Tri-Klops is in a solid second place.

If you're a Tri-Klops fan I've also reviewed the M.U.S.C.L.E. flesh Tri-Klops and green Tri-Klops, the POP! + Pez Tri-Klops dispenser, the Loyal Subjects Tri-Klops ("GID Edition"), the Mega Construx Tri-Klops from the Battle Ram set, and the POP! Tri-Klops #951.