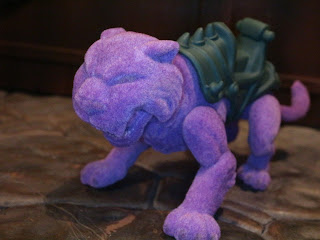 Recently I got my hands on the Hot Topic exclusive flocked Panthor from The Loyal Subjects' Masters of the Universe Acton Vinyl line so today I'm going to be checking him out. I reviewed the flocked Battle Cat from the Action Vinyls earlier this month and, if you remember, I had some problems with him due to the flocking covering the paint. I obviously love all things MOTU, especially the big cats, and I'm thrilled that The Loyal Subjects released flocked variants of these guys. While Battle Cat has never been flocked before, most releases of Panthor have been (outside of the MOTUC version). Unfortunately, these versions of the big cats have flocking that covers over the eyes, claws, and teeth. Weird, huh? I'm guessing this really was a production error as I'm not sure why any company would intentionally cover all of the painted detail. Let's take a look at the flocked Panthor after the break... 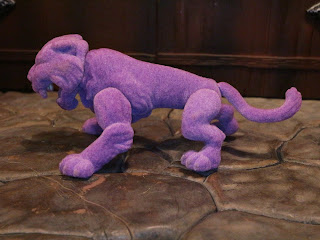 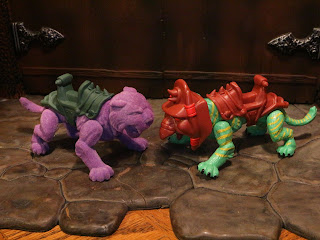 * On the left is the flocked version of Skeletor's kitty cat Panthor while He-Man's feline friend, Battle Cat, is on the right. Panthor and Battle Cat share the exact same bodies and saddles and, possibly, even the same heads. While Battle Cat's helmet isn't removable, I think he and Panthor shared the same head underneath the glued on helmet. Check out the Battle Cat reviews for the full run down as today I'm just hitting the highlights. 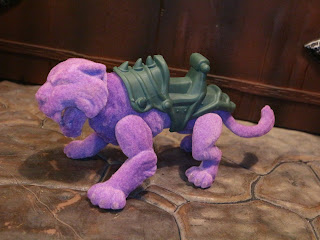 * Like with Battle Cat, I like the overall sculpt, colors, and the flocking. These guys do feel like miniature versions of the MOTUC toys and there is something really cool about that. You might consider these guys minifigures, so it's cool to have some articulated minifigures of the MOTU crew. The saddle is removable on Panthor as well, just like on Battle Cat. 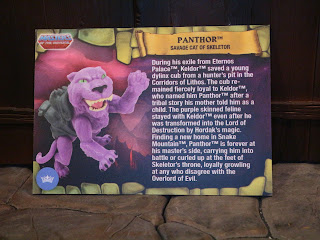 * To add a bit more personalization and fun to each release The Loyal Subjects adds a bio card. It's a cool little extra that uses the MOTUC bio for Panthor here. 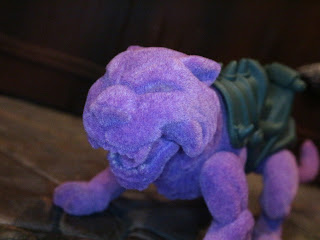 * Like on the flocked Battle Cat, I'm frustrated by the fact that the flocking covers over all of the details such as the mouth, teeth, eyes, nose, and claws. This would have been an amazing looking figure if the flocking had been handled more carefully. As it stands, this definitely seems like a major Q/C issue. This couldn't have been intentional, right? 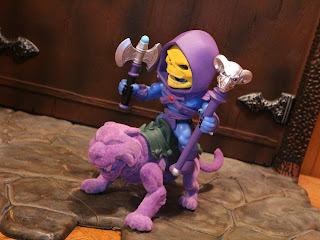 *  Compare the size of an Action Vinyls Skeletor with Panthor and Panthor does seem rather undersized, doesn't he? Considering these guys were sold separately in their own window boxes (not forced into the same boxes as everyone else, their size shouldn't have mattered much and they could have been made a bit larger. You know what, though? They really scale well with the Mega Construx figures. 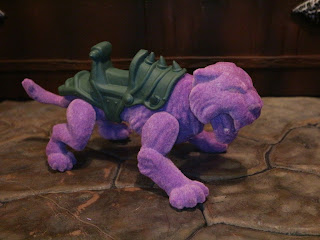 I'm actually giving Panthor an Eh and a 1/2, which is lower than Battle Cat's score, simply because while Battle Cat's helmet helped mask some of the fact that the flocking covered everything, Panthor doesn't get that luxury. He's still undersized but he also very clearly looks off compared to the flocking covering his facial features. I don't yet have the standard Panthor, so I'm still hoping to find him as I imagine he will be an improvement over this version due to the painted features. When I get the standard Panthor I'll report back and let you know how things go.


If you're a Panthor fan I've also checked out the M.U.S.C.L.E. version of Panthor.