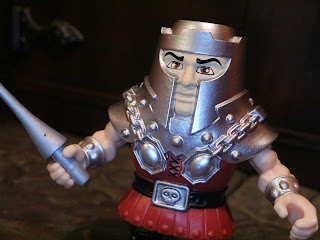 I've got three Masters of the Universe Action Vinyls figures left to review and after today's review I'll be down to two. Today I'm checking out Ram-Man, one of my favorite Masters of the Universe characters. I never owned Ram-Man as a kid but I always was intrigued by how differently he was constructed from the rest of the figures. The vintage Ram-Man is such a unique figure though he's obviously built around his action feature. Most subsequent Ram-Man figures have worked to meet a balance between offering up some updated articulation while still also capturing the Heroic Human Battering Ram's classic proportions. Let's see how The Loyal Subjects captured Ram-Man in this line after the break... 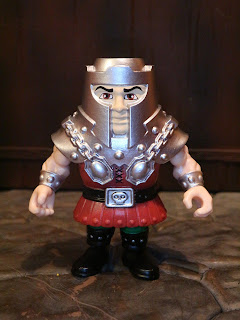 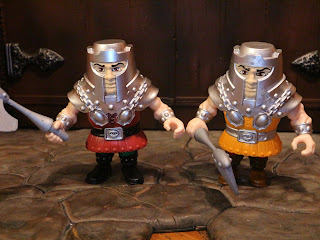 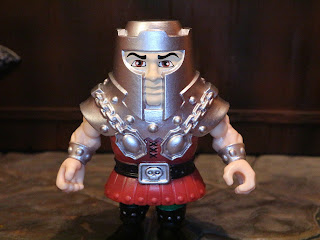 
* The Action Vinyls Ram-Man looks like a great mixture between the vintage Ram-Man and the Masters of the Universe Classics Ram-Man. He's a completely unique sculpt and features lots of detail in the insanely cool armored buts that he s[ports. The paintwork is pretty tight, too, so Ram-Man definitely looks fantastically impressive. 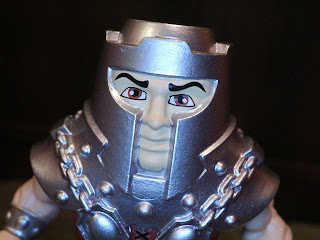 * Ram-Man doesn't have a separate head but he still has a pretty nice headsculpt. I love the armored head and the face sticking out. He looks more like the Filmation Ram-Man to me rather than the vintage toy or MOTUC but it's still a nice look. The eyes are very cleanly painted and I love the dramatic eyebrows. 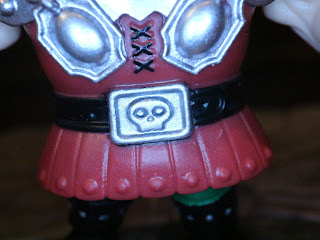 * Ram-Man means business, and you can tell that because he's wearing a massive belt buckle sporting a skull. I love this detail! It's very well sculpted and makes a dramatic statement! 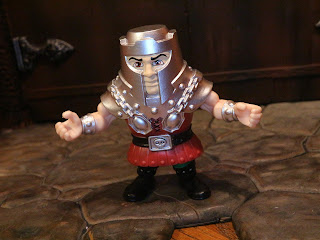 *  I mentioned it in the intro but Ram-Man is usually built quite different from most other figures in the MOTU lines he has shown up in. That's no exception here, either, as this version is mostly solid from the waist up. He does have more articulation than any other Ram-Man figure besides the MOTUC version, though, so that's still to the figures credit. He's also a little shorter than most other figures, which seems more in line with the vintage depiction of the character. 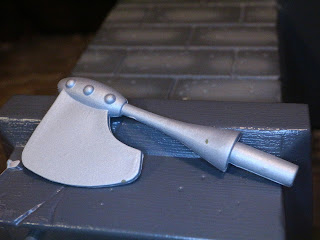 * Ram-Man has always wielded a fairly nasty battle ax and that's what he gets here, too. It looks very, very similar to the vintage toy's ax. 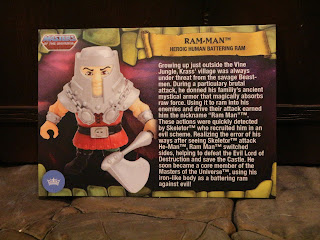 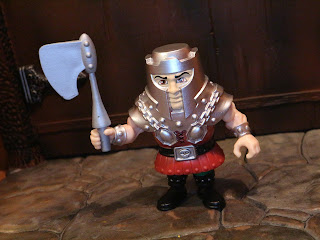 While he isn't as well articulated as the other figures in the line, Ram-Man is definitely a well crafted version of the figure. Even at the smaller size of the Action Vinyls line Ram-Man still manages to have better articulation than most other Ram-Man figures made. Ram-Man's one of my favorite characters and I happen to think this is a pretty cool version of the character. He's a Great and a 1/2 figure and, fortunately, he should be an easier one to find. Ram-Man comes packed about 2 to a case so many folks who picked up a full case probably have an extra figure to sell off. If you're a fan, grab him. He's smashing!