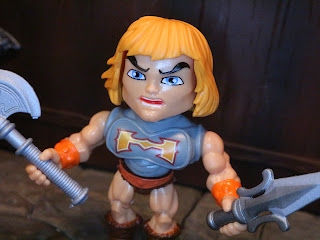 While I've reviewed Panthor and two different versions of Battle Cat, I haven't actually reviewed any of the standard figures released by The Loyal Subjects in their Masters of the Universe Action Vinyls line of miniature action figures. The second series of figures just started showing up a month or so ago, although they did have early variant releases through Hot Topic at the end of 2018. Today I'm checking out the first of the standard Series 2 releases: Battle Armor He-Man! I've always loved Battle Armor He-Man ever since I was a child and I'm always down for a version for the figure. Battle Armor He-Man shouldn't be a tough figure to find as his rarity is 2/12, or about two per case. While the series 1 figures were all blind boxed, series 2 has moved towards window boxes and window boxed with blacked out windows. Most of the standard 2/12 figures can easily be found in a visible window box, so at least getting the basic figures in a set should be easier.  Let's take a look at Battle Armor He-Man after the break... 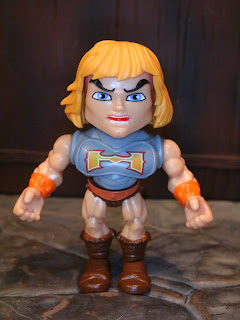 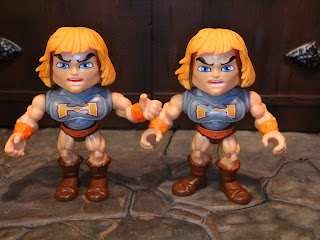 
* On the left is Battle Armor He-Man from the mainstream series 2 release while on the right is the Hot Topic exclusive Battle Damage variant. The only difference between this figure and the Hot Topic variant is that the variant has the scratches in the stylized "H" logo on the armor. 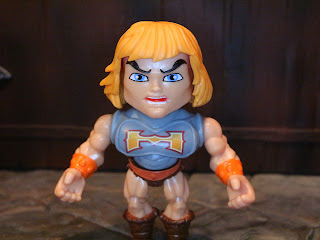 * These really are great looking smaller action figures. They might be a little too tall to be called minifigures but, compared to the usually bulky MOTU toys, these guys are definitely smaller. They really do look like miniature versions of the MOTUC figures, don't they? They have the traditional muscular, barbaric proportions you'd expect from a MOTU figure, although here He-Man is wearing his classic battle armor with the stylized "H" on it. It's a neat, clean tampographic print and it looks great. 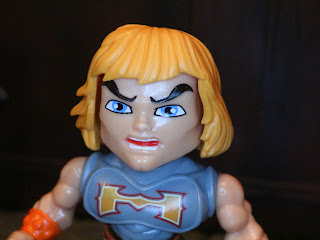 * This isn't the same headsculpt as the series 1 He-Man figures had, either. It's completely new and I like it a bit better. It's definitely more stylized than the body and gives the figure more of a chibi look, but it still manages to capture a pretty angry looking He-Man face. The hair is a separate piece placed over the head (rather than being molded as part of the headsculpt like series 1) and it's wild shagginess goes along well with the arched eyebrows. 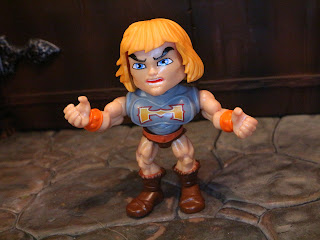 * He-Man comes with three accessories and first up is his Power Sword. I love this version of the Power Sword as it reminds me of a mixture between the classic toy inspired sword and the Filmation Power Sword. It has a lighter blade with a slightly darker hilt, which really improves the look of it, and the blade is legitimately points. Seriously. You can poke someone with this and it'll hurt. Beware! 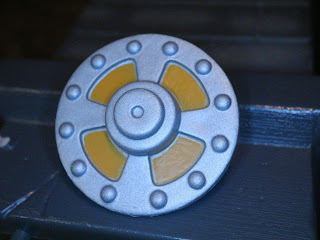 * He-Man also comes with his classic shield. While the vintage and MOTUC Battle Armor He-Man figures didn't come with shields, I'm still A-OK with this. Who complains about extra accessories, right? The shield is simple with a sturdy handle instead of a wrist clip, making it much easier to use. 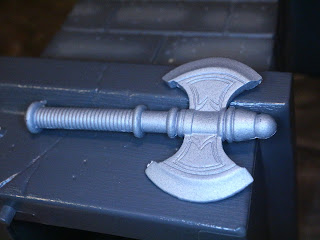 * Last, but not least, is He-Man's ax. I love this ax. Love it, love it, love it. While I'm definitely more of a fan of the good natured, lovable, sort of silly incarnations of Masters of the Universe, I still love the thought of He-Man dispatching some foes with this thing. It's always been one of my favorite designs and it looks just as cool, if not better, here. The detail on the blade is really quite sharp (pun intended!). 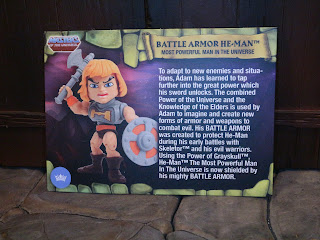 * To add a bit more personalization and fun to each release The Loyal Subjects adds a bio card. It's a cool little extra that uses the MOTUC bio for Battle Armor He-Man here. The back features a checklist for series 2, as well. 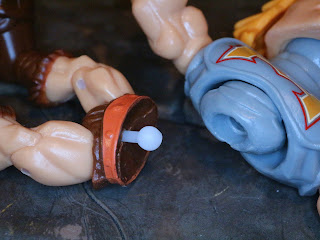 * The balljoints can detach very easily. That's not a huge problem in and of itself but the joints do seem to be rather thin. Much thinner I'm comfortable with for joints you'll have to pop in and out. Be careful and gentle when popping these back into the sockets! 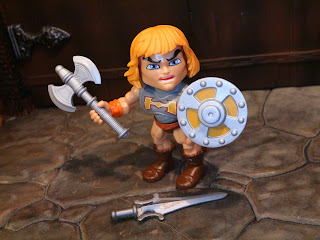 These are cool little toys and the fact that you can easily obtain a great looking miniature Battle Armor He-Man with so many accessories is a definitely something to be celebrated. I love the look of this figure! He definitely makes for a cool desktop decoration that you'll certainly have fun posing and playing with over and over. The accessories are all just aces. While I don't like how many rare figures The Loyal Subjects has in this line, I do like the figures. The move away from full packs of blind boxes was a good decision and makes these guys more appealing. Battle Armor He-Man is a Great and a 1/2 toy who is well worth tracking down!


He-Man/ Prince Adam is one of my favorite characters. For more He-Man reviews visit here!

For more reviews from Masters of the Universe Action Vinyls, check out the following:
Battle Cat
Battle Cat (Flocked)
Panthor