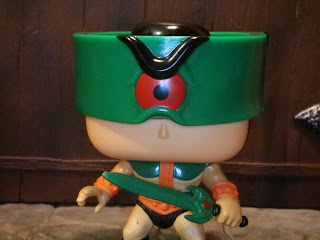 While Emerald City Comic Con has been delayed due to the Coronavirus/ Covid-19, the exclusives have still been making their way out to collectors. Many of Funko's convention exclusives are shared between a specific convention and a specific retailer, and Tri-Klops is shared with ECCC and FYE  stores. While we kind of thought last year's Buzz-Off POP! (who was also an ECCC and FYE shared exclusive) would be the last Masters of the Universe POP! vinyl, it turns out that Funko has big plans again for the property.  Tri-Klops is an excellent POP! release as he's arguably one of the A-list Evil Warriors. While he didn't show up until the 2nd series of vintage toys, he's instantly recognizable due to his unique gimmick and his multiple appearances in the minicomics, Filmation cartoon, and MYP cartoon. I never had Tri-Klops as a kid but I always wanted him. His green and orange color scheme really stands out and his action feature is so much fun! Let's take a look at this Evil Warrior who sees everything after the break... 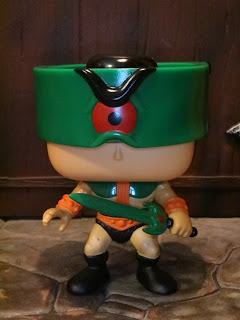 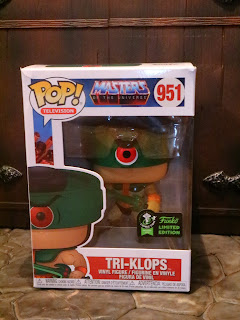 * Two things to point: First, the previous MOTU Funko releases had orange backgrounds with green Grayskull styled bricks at the bottom. The new releases feature the red and blue "explosion" backgrounds, just like the vintage toys.

Second, there are two different labels for Tri-Klops. Some have a "Funko 2020 Spring Convention Limited Exclusive" sticker while others have the actual Emerald City Comic Con exclusive sticker. I ordered mine from FYE.com, but still got the ECCC sticker. Nice! 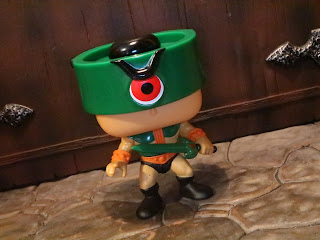 * Tri-Klops is incredible! Like nearly every other POP! vinyl (except for Star Wars and Marvel) Tri-Klops has a swivel neck, so you can have him looking around. He's posed in a cool "ready for battle" pose that definitely reminds me of the vintage MOTU toys. He looks great and is very accurate to the vintage toy, rather than the Filmation cartoon (even though these are sold under he POP! Television banner). 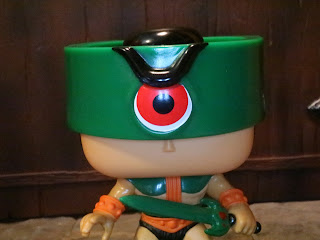 * Unlike any other POP! I think can think of (thought I could always be forgetting something, as I'm no POP! vinyl expert) Tri-Klops features a rotating visor, allowing for him to utilize his three different visions: Distavision, Nightvision, and Gammavision. Well, he also could shoot lasers in the Filmation cartoon. And a bunch of stuff in the MYP cartoon. OK, his powers are somewhat ill defined, but having three different eyes on this POP! is really, really cool. 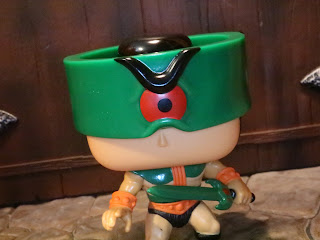 * This one is actually my favorite, and might be his "default" eye as is features the little bridge piece for his nose. 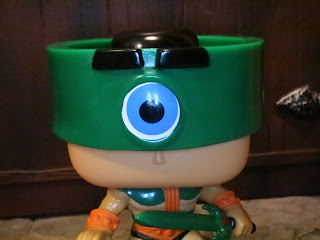 * Last up is the blue eye. Notice that the "eyebrow" shaped pieces of Tri-Klops' helmet are also shaped differently. 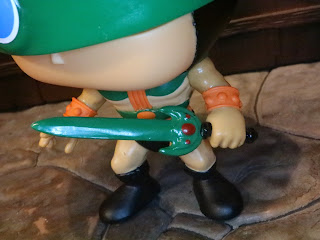 * Tri-Klops has an awesome sword and Funko did a great job of recreating it and giving it a few paint applications. I love it! Not that the parts would be reused but it definitely makes me yearn for a Fisto in the POP! line as well. 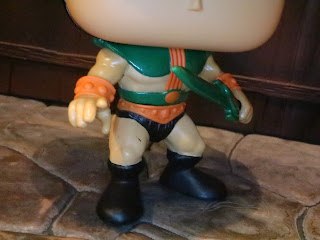 * Tri-Klop's armor is quite cool and nicely painted, excellently capturing the vintage look. 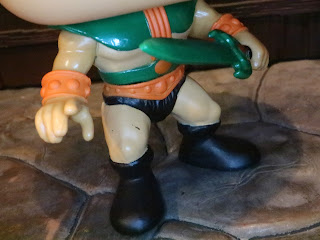 * See that errant spot of black paint on Tri-Klops' right thigh? What's it doing there? Arrghh!!

OK, it's not a huge deal. Really just a small QC issue. 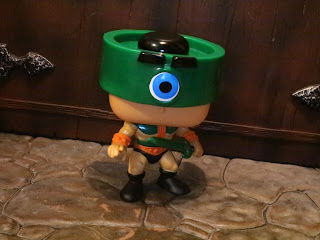 Tri-Klops is one of my favorites figures in both the 200x and the MOTUC lines and he's getting up there in the Funko POP! line, too. The fact that Funko captured his vintage action feature is quite fun and makes for a really cool interactive figure. He's a convention exclusive and will cost you a few bucks more than a standard POP! vinyl, but I'd say he's worth it. He's a Great and a 1/2 toy and an excellent addition to the POP! Evil Warriors. Now I hope we get a Man-E-Faces POP! at some point who operates the same way!


If you're a Tri-Klops fan I've also reviewed the M.U.S.C.L.E. flesh Tri-Klops and the green Tri-Klops.