Action Figure Review: Fisto from Masters of the Universe Action Vinyls by The Loyal Subjects 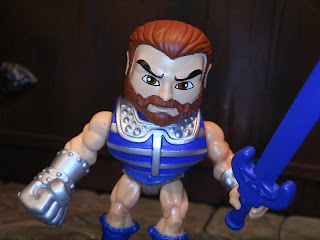 Today I'm checking out yet another figure from series 2 of The Loyal Subjects' Masters of the Universe Action Vinyls line and this time it's one of the Heroic Warriors: Fisto! I love Fisto as he's just a simple, bearded warrior with a massive metal fist. What's not to like? Despite being gimmicky (again, giant metal fist and he's named Fisto), he definitely didn't feel as gimmicky as some of the later Heroic Warriors in the line. Fisto always felt like a character who was just waiting to break into the A-list of MOTU characters, especially in the 200x series where he was written as Man-At-Arms' brother and, possibly, the true father of Teela. Fisto: Heroic hand-to-hand fighter, foe of the Snake Men, absentee father, and star of multiple memes. Let's check this guy out after the break... 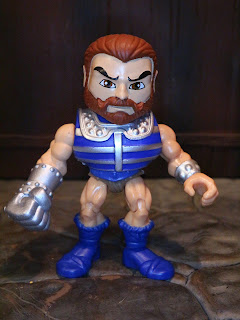 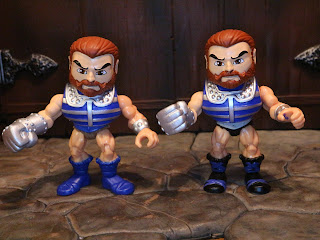 On the left is the standard Fisto figure that I'm reviewing today while on the right is the Hot Topic exclusive Fisto. That version has black shorts and black boots. It's a minor difference, but it's different nonetheless. Plus, it came out at the end of last year, so he was on the market for at least 4-5 months before the standard series 2 Fisto. 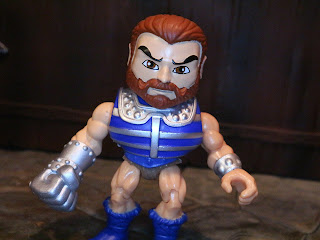 * Fisto is just a burly looking figure, even when presented in this smaller scale and somewhat cutesy style. I love the purple and silver color scheme. The paintwork is neat and the details on the armor and the boots are pretty sharp. There's obviously some reuse here, probably on the body and the boots, but that doesn't mean that Fisto doesn't wear this look better than most. 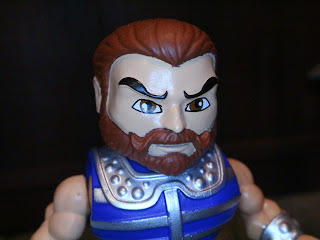 * The headsculpt is fantastic, especially the great work on Fisto's beard. I like how you can clearly see small differences in the hair on his head, beard, and mustache. His eyes and eyebrows are pretty intense, too, befitting a man who roams Eternia on a robotic horse with a giant fist of justice. 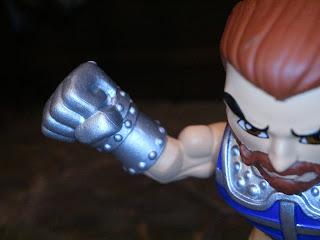 * Speaking of a giant fist of justice, here it is! Yes, of course Fisto comes with his enormous metal fist. Well, it's not enormous but, compared to the size of this figure, it definitely is larger. It's also not really made of metal. It's painted with a metallic silver paint that certainly does the trick, however. I like it. 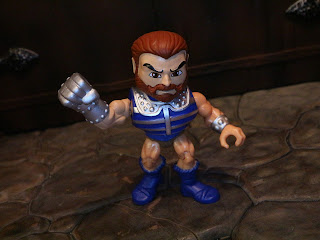 *  For series 2 The Loyal Subjects redsigned the body. There's more articulation here and a slightly slimmer body for the base figure, although it's tough to tell with Fisto since most of it's hidden under his bulky armor. The figure mostly has balljoints, though not all of them have an extreme range of motion. The head and body joints are good, though, and the figure stands well and has a nice playability factor to it. 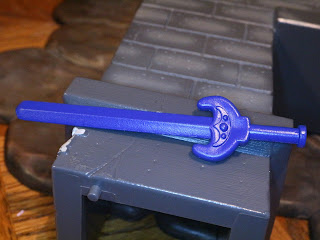 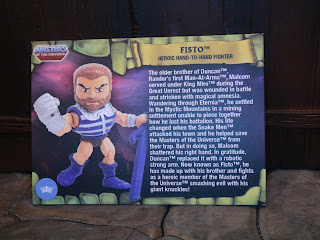 * To add a bit more personalization and fun to each release The Loyal Subjects adds a bio card. It's a cool little extra that uses the MOTUC bio for Fisto here. The back features a checklist for series 2, as well. 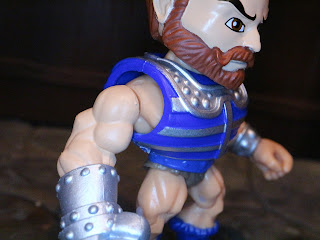 
* Fisto's armor looks a bit oversized, particularly from the side. I kind of wish that The Loyal Subjects would have just made a new armored torso to use for Fisto and Clamp Champ (I hope they keep going so we can get a Clamp Champ) as it would have probably looked a lot better. 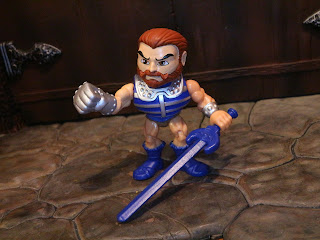 I'm always up for a good Fisto figure and this one is pretty cool, especially because he's kind of like a miniature Masters of the Universe Classics figure. The headsculpt is excellent, as are the fists and the sword. My only real complaint is the armor, since it's just a tad bit oversized. We haven't heard about any new releases coming anytime soon for this line but I really hope The Loyal Subjects is able to keep the line going. There are still so many characters I want to see and they're starting to do a better job making it easier to get some characters. Fisto is a 1/12 figure, so you should typically find one of him in each box. He's easier to find then some, but tougher than others.


If you're a Fisto fan, check out my review of the mini Fisto from the M.U.S.C.L.E. Masters of the Universe #1 set and the Club Grayskull Fisto.