Barbecue's Bonfire 3/12/16: The "I've Gotta Wrap This Up So I Can Go Geocaching" Edition 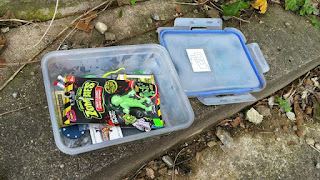 I've been slam busy at work this past week, the weather is awesome today, and I'm only 27 finds away from hitting 700 finds, so today I'm all about getting out and doing some geocaching! Of course, I still want to tell you about the cool things that I've done this past week, so check out this abbreviated installment of Barbecue's Bonfire! Today I talk about Marvel's Chewbacca TPB, Grayson vol, trying to track down the Star Wars: Adventures in Wild Space series of books, episode #41 of the Confirmed Epic Podcast, Calvin's Canadian Cave of Coolness showing off my Batgirl collection, Spidey in the new Civil War trailer, and more! After the break...

* Released this past Tuesday, me and the little one have already read the new Chewbacca TPB by Gerry Duggan and Phil Noto and we definitely enjoyed it. The Marvel Star Wars books continue to have incredible art and really capture the tone and voices of the Original Trilogy characters. While this book is probably the least necessary in terms of its effect on the overall storyline and plot, it's still pretty difficult to skip a book starring Chewbacca. What's funny is that while the films and other media sources have typically depicted other characters understanding Chewbacca, the characters in this series do not. Honestly, we as the audience already familiar Chewbacca get to experience the feeling of being able to understand Chewie (even though his dialogue is still a series of barks and growls) when others do not. It's a fun, quick read with more than a few great moments. Plus, there's a scene where Chewbacca takes a nap and my little one thought that was just incredible. 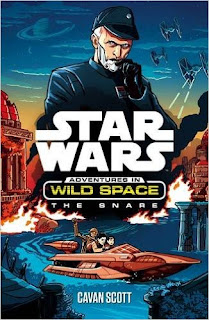 * Has anyone else heard of the Star Wars: Adventures in Wild Space series? As far as I can tell this is a young adult series that seems to have only been officially released in the UK this past February. There are four full books in the series (the first two are already out) and a prequel that was a World Book Day exclusive. I've been trying to pick these up and so far I only have book two: The Nest. I do have copies of the prequel: The Escape and book one: The Snare on the way, though, so hopefully I'll be able to read these before long. It's really interesting that there's not been more talk about this series. I'll let you know how they are as soon as I get my copies and read them. As far as I can tell, they take place in the Rebels era, but they don't interact with the main storyline.

* We gotta talk about this Spider-Man from the new Captain America: Civil War trailer. While I'm not the biggest Spider-Man fan, I have to admit that I was really looking forward to seeing him in the film. The new trailer is awesome but Spider-Man just looks really weak here. He really looks like an unfinished CGI effect or a character from a videogame. While I didn't care for the movies (ASM2 was watchable but nothing special), I think the ASM series definitely had some pretty nice looking suits. It'd be a shame if Marvel Studios couldn't top Sony in that area. I do like them sticking with a classic looking costume, but something just looks really, really off. I'm very interested to see a picture of a maskless Spidey to get a better idea of how the suit actually looks. 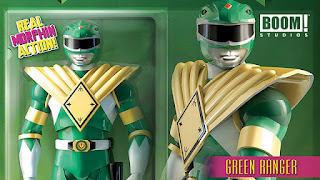 *This week myself and Andrew "There's a Snake in My Boot" Stokes recorded episode #41 of the Confirmed Epic Podcast! In this episode we talked about issues #0 and #1 of Boom Studios new Might Morphin Power Rangers comic, the Ghostbusters trailer, Abednedo naming patterns, and more. As far as Andrew and I could remember this was our first episode together with out Brad, but then half way through we had a special visit from the Reel Brad Bell! 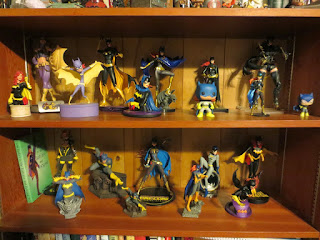 * I just wanted to extend a thank you to Cal over at Calvin's Canadian Cave of Cool for showcasing my Batgirl collection!I've worked hard to track down many fun pieces for this collection (the picture to the right is only a part of it) and it's constantly growing. There's something really fun about picking one character and creating a diverse collection around them. I've picked up all kinds of random Batgirl stuff and you can see it all displayed over at my Virtual Batgirl Museum! 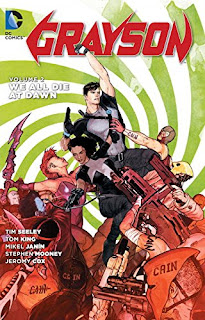 *I also finished volume #2 of Tim Seeley, Tom King, and Mikel Janin's Grayson. Following up from the New 52 Nightwing series, Dick Grayson is now Agent 37, a double agent that has been recruited by Spyral. While he's serving as a mole and keeping in contact with Batman (AKA Mr. Malone), Dick is also traveling across the globe helping to track down some genetically engineered organs that contain the DNA of the Justice League. While it might feel disconnected from the other Batfamily titles, Grayson is kind of refreshing in that it's so different. It's fun and is filled with a few self contained missions that tie into a larger plot. The presence of Helena Bertinelli in a different role is also a pretty cool element. Her and Dick's interactions are quite charming, particularly in light of the events of Batgirl volume 2.


Well, that does it for the next 7 days! Over the coming week I should have some more great reviews including a couple figures from the newest Star Wars: The Black Series wave (including Ahsoka Tano), some more new Batgirl items, Captain Olimar from Jakks Pacific's World of Nintendo 2.5 inch line, and a scattering of figures from Mattel's various DC based lines including DC Universe Signature Collection, Watchmen, and the DC Comics Multiverse lines. Lots of DC love as we await Batman V. Superman: Dawn of Justice! Wish me luck in my geocaching today!