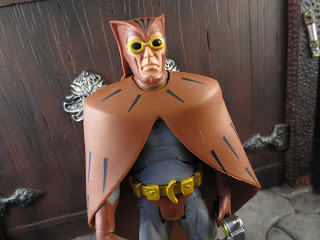 Today I'm looking at the third figure I've recently traded for from Mattel's 2012 Watchmen series: Nite Owl! Technically this is Nite Owl II since the original Nite Owl, Hollis Mason, retired and passed the mantle of the character down to Daniel Dreiberg. After Rorschach, Nite Owl is my favorite member of the Watchmen. He's definitely the most heroic and is truly one of those characters who does what he's doing because he believes it's right. Of course, so does Rorschach, but Nite Owl is a bit less... unhinged than Rorschach. Based on elements of Blue Beetle and Batman, Nite Owl is the member of the Watchmen with all of the cool toys. While I hate that we'll probably never get a scale version of Archimedes, I have to admit that it's pretty cool to have a comic influenced version of Nite Owl on the shelf to stand next to other caped detectives. Ready for a closer look at Nite Owl? Then join me after the break... 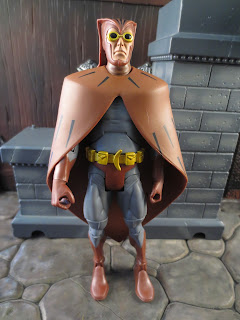 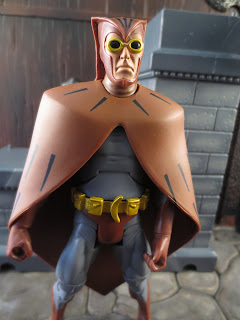 
* Daniel Dreiberg just looks awesome here in his Nite Owl garb. Mattel did an excellent job with this figure and while he uses a number of standard pieces from the earlier DC Universe Classics line, the new utility belt (does he ever call it an owltility belt? Because he should.), cape, and head make this feel like a completely new figure. I love the colors here as the seem very true to the comic to the art of Dave Gibbons and the coloring of John Higgins. Visually, he might be the most impressive figure in the line. 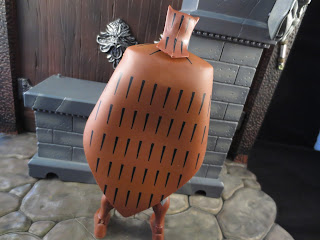 * Here's a shot of Nite Owl's cape from behind. I like the clean, patterned print on it. It looks really cool as it evokes owl feathers without being too crazy. The way it sits across Nite Owl's shoulders also looks quite good. It's very true to the book. 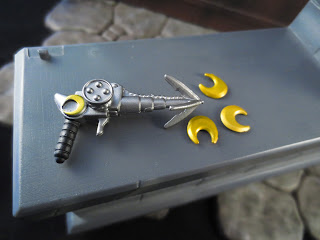 * Nite Owl comes with a few nice accessories. I love his grappling hook. It has a pretty sweet paint job and some rather detailed sculpting on the sides. Heck, I'd argue that this is as good or better than any grappling hook weapon that's come with a mass market Batman figure. Further showing off his inspiration, Nite Owl includes three moon shaped projectiles. Molded in a golden yellow plastic, these are really quite sharp and definitely ensure that Nite Owl is the most well accessorized of all the figures in the line. 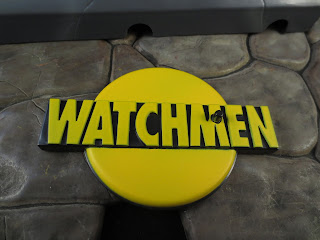 * Every figure in this line comes with a display stand, something I'm pretty jazzed about. It's a simple disc and peg stand but the presentation is awesome. The word "Watchmen" is sculpted on the base with a yellow disc behind it. It looks great and functions really well. I wish the DC Universe Signature Collection had come with stands; I'm always in favor of stuff like this. 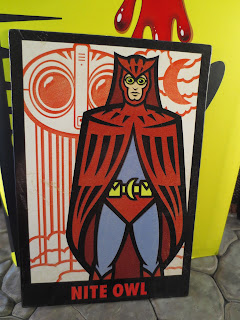 + The Nite Owl print is new and features a bio on the other side.

+The Doomsday Clock on the front of the package is set at less than an two hours until midnight while the side panels feature the fourth part of the "Who Watches the Watchmen?" mural and a stylized image of Archie taking off. 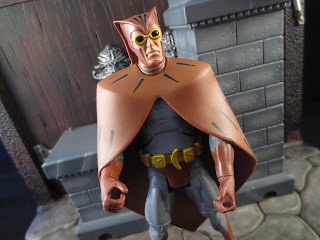 * My only real complaint about this figure is that Nite Owl's cape severely limits his shoulder articulation. I mean, it really hampers him. Forget him throwing a punch or even using his grappling gun; Nite Owl's pretty much confined to just standing around looking menacing. 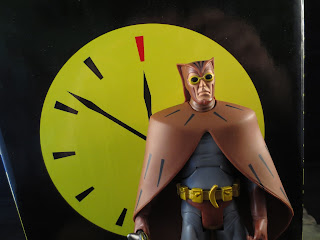 So far, out of the three figures I've reviewed, I'd say that Nite Owl is the best. Heck, Nite Owl is a pretty solid figure overall. While the way his shoulders are inhibited is definitely a problem, I can't help but love the look of his cape and the headsculpt. It just flows together rather seamlessly. While the other figures in the line have been decent, Nite Owl is the first one to really impress me. The accessories really help with that. I'd say that Nite Owl is actually a Great figure and might be worth tracking down if you're a fan of the character or the property.

I've only reviewed two other figures in this series so far: The Comedian and Dr. Manhattan. I'm working on reviewing the entire series and should have everything in the action figure review index by the end of the next week.
Posted by Barbecue17 at 3/18/2016