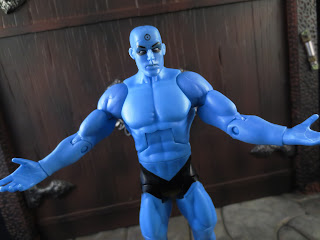 I'm not sure there's a better comic issue ever written than Chapter 4 of Watchmen, "Watchmaker." I man, all of Watchmen is pretty incredible, but that chapter which introduces Dr. Manhattan's origin and the true extent of his powers to the reader is just astounding. Whether you've only watched the film or are intimately familiar with the graphic novel, Doctor Manhattan leaves one heck of an impression. While his full on nudity was much talked about in the film, Mattel opted to depict the figure in one of his many uniforms. Well, it's one of his simpler ones: These are his small blue trunks, so there's a slightly diminished view of his "Lower Manhattan." Hey, Mattel could have just slapped his head on one of those suited bodies they loved so much and created a variant of Doctor Manhattan from when he goes on the talk show early in the book. Too bad we never got a second series of these figures! Based on comments made by Scott Neitlich after the line was concluded, this 2012 Watchmen series seem to have been pretty poorly received initially but it might be worth reconsidering for Watchmen fans. Let's take a look at the former Dr. Jonathan Osterman, now known as Doctor Manhattan, after the break... 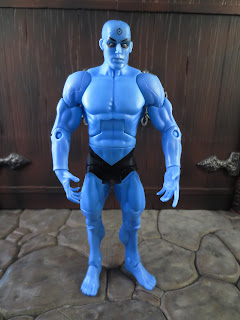 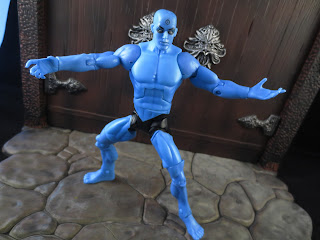 * One of the directives for this line was that they needed to heavily reuse parts from Mattel's long running DC Universe Classics line, and Doctor Manhattan is about as basic a they come. While the bare feet might be new, everything else other than the head is pretty standard reuse. Of course, that means that he has the full range of articulation that you know and love from DCUC. He's really sturdy and it's nice having him fit in alongside others heroes like Captain Atom and Firestorm. 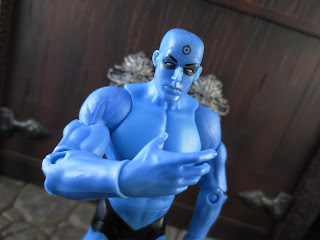 * The basic DCUC body is already pretty much what is needed for a Doctor Manhattan figure. Just paint that body blue and you're most of the way there. The head scupt is good and looks just a little bit angry. Or perhaps pensive? Maybe this represents Doctor Manhattan deep in thought about the universe? He also has the hydrogen atom symbol on his forehead, a symbol that he respects. The paintwork here is neat and clean, and that's something that I can respect. 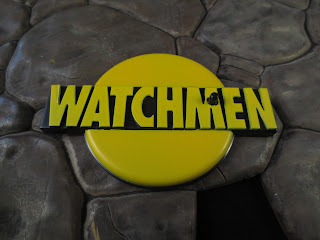 * One thing I really like about this line is that every figure comes with a display stand. It's a simple disc and peg stand but the presentation is awesome. The word "Watchmen" is sculpted on the base with a yellow disc behind it. It looks great and functions really well. I wish the DC Universe Signature Collection had come with stands; I'm always in favor of stuff like this. 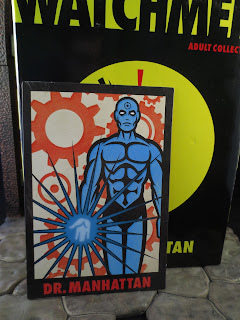 * The packaging and included art prints for this series is really pretty cool. I did a pretty extensive rundown of the packaging in my review of the Comedian, so make sure to check that out, but I'll mention the unique elements here:

+ The Dr. Manhattan print is new and features a bio on the other side.

+The Doomsday Clock on the front of the package is set at less than an hour until midnight while his side panels feature the fifth part of the "Who Watches the Watchmen?" mural and a design of some watch cogs.

There's not much packaging worth keeping, but this collector friendly packaging is pretty grand. 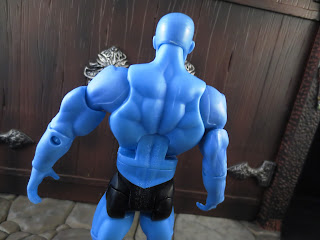 * While Doctor Manhattan is certainly capable of changing his hue, he typically makes it consistent across his body. It's hard to see in a picture but in person you can discern a different blue hue between his torso and limbs. Not sure what this happened since he's basically all blue with some black paint for shorts, but it's there. It's not terrible but it is a bit puzzling. 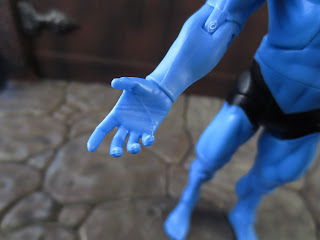 * While the packaging is top notch, the Watchmen figures themselves feel a bit lazy in their execution. Read this interview with Scott Neitlich and see if you don't agree that almost every answer seems to come down to keeping a low overhead. Disappointingly, Doctor Manhattan doesn't come with any accessories at all. I know he doesn't use much but such a bare bones figure could have included something. Perhaps the rifle that he disassembled when first showing off his powers to the world? Or the picture of he and Janey Slater. Or the infamous watch that was crucial in his metamorphosis. 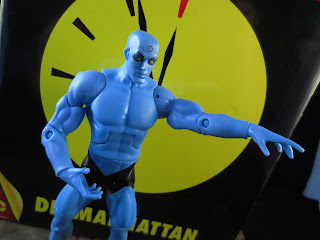 I really like this figure. It's incredibly simple. It's definitely not a $25 dollar figure by any stretch of the imagination, but considering I picked this up in a trade I'm completely OK with it. There's something really cool about having the Watchmen crew being able to stand alongside other superhero toys, particularly the DC Universe crew. Still, when looking at just the figure, the Doc here is the definition of average. He has no accessories and the odd flaw of his colors not matching. He's Good, but doesn't really surpass the presence of the older DC Direct figure. Of course, that one's based on the movie and won't really fit in with the DCUC collection.

The only other figure from this series I've reviewed so far is the Comedian. I'll be reviewing the entire series over the next few weeks.
Posted by Barbecue17 at 3/17/2016