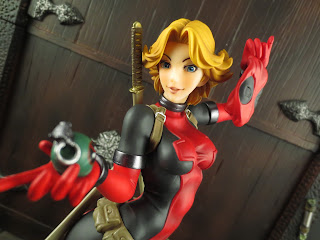 Today I'm looking at one of the newest Bishoujo statues from Kotobukiya but guess what? It's not from their DC Bishoujo line that I'm such a huge fan of; it's from their Marvel line! Yup, this is the first Marvel Bishoujo figure I've picked up and I'm pretty thrilled with it. Lady Deadpool is also a fairly customizable statue, something that we've seen glimpses of from Kotobukiya before but not to this extent seen here. Lady Deadpool, AKA Wanda Wilson, seemed like too cool of a figure to skip out on so I had to pick her up. As part of the Deadpool Corps and the Deadpool on Earth-3010, it seems like Kotobukiya did a pretty good job of scheduling for Wanda to be released shortly after the release of the Deadpool movie, wouldn't you agree? Let's take a closer look at this figure after the break... 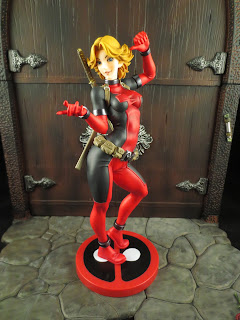 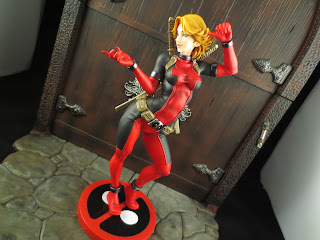 *Poses are so important on statues like this and Kotobukiya did an awesome job with Lady Deadpool. If you look at the statue as it is, it seems like she's kind of taunting someone and just being outright sassy. You know, just like Wade Wilson. Of course, add in the extra grenade accessory or the hand holding the mask and the pose takes on a slightly different tone. Cool stuff! 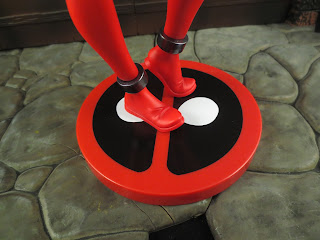 *Lady Deadpool doesn't have as intricate of a base as some past figures in this series have but it still looks pretty cool. Her small, round base is actually the Deadpool emblem. It looks great and is quite fitting. 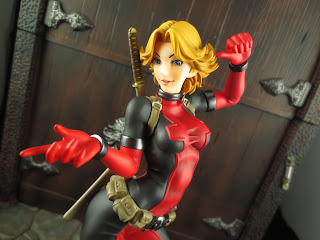 * Interestingly, the default portrait for Lady Deadpool is the unmasked one (it's the head she's wearing in the package). Unlike Deadpool's ugly mug, Wanda Wilson is actually cute. She's really cute, actually, and has some incredible hair.  I love how cheerful and carefree she looks, particularly when you realize that she's an assassin few people can stand to be around. 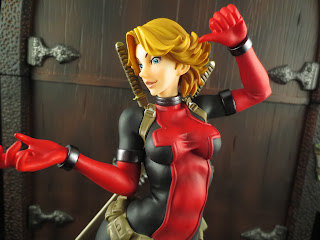 * The sculpting and paintwork on the costume also is incredibly impressive. Kotobukiya's colors always look so impressive and they manage to very convincingly sculpt outfits so you can see all of the folds and creases you'd expect. This is an excellent rendition of Lady Deadpool while also fitting in with Kotobukiya's Bishoujo aesthetic. 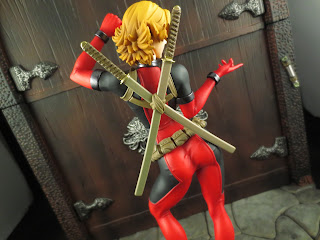 * Turn Lady Deadpool around and you can check out the katanas she's toting around. Again, the paintwork and sculpt is just incredible. 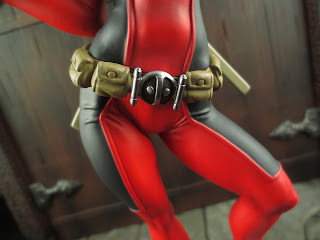 * And here's a closer look at Wanda's belt. It's cool and features the Deadpool Corps emblem as a belt buckle. The belt is covered with pouches to hold all kinds of goodies such as bubblegum, extra ammunition, and probably more explosives. 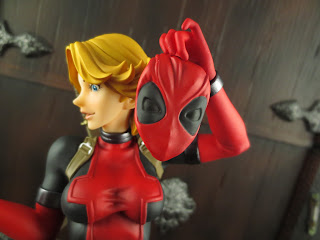 * Want to show off both Wanda Wilson's gorgeous face and the Deadpool mask? Well, here's an alternate hand that features her holding up the mask. It's an easy piece to swap out and looks cool. I really dig the versatility on this statue as you can do so many different things with it! 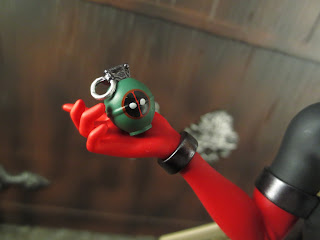 * This cool little grenade fits into the palm of Wanda's right hand via a small plug. It looks like a standard fragmentation grenade although it has emblazoned with the Deadpool emblem, so who knows what exactly it does? I love the way it looks when attached. it works so well with the sassy pose! 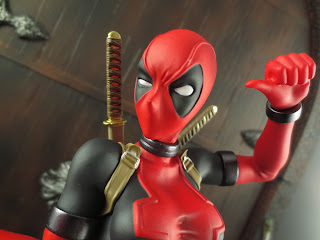 * Of course, Wanda also comes with a masked head. This is really similar to what Deadpool wears but slightly more feminine in regards to the shape of the head. I love the expression on the face, too. As you can see, one eye is larger than the other, almost as if she's winking. Or raising an eyebrow. It works and it's easy to swap. 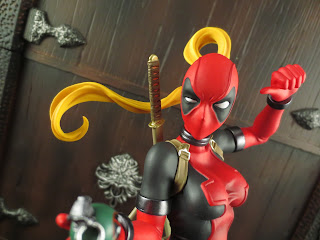 * I love how Wanda's hair when she's wearing the mask looks nothing like Wanda's real hair. I'm not sure if the hair is supposed to be an optional piece or if Kotobukiya just packaged it separately for storage purpose but it looks great. It's very fun and adds a nice flowing, dynamic edge to the statue. 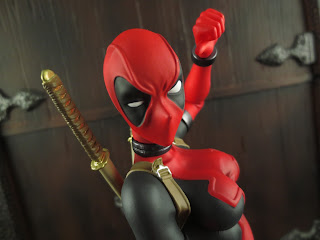 
* Honestly, I don't have any. This statue is just pure perfection and definitely shows what Kotobukiya is capable of doing when they're firing on all cylinders. 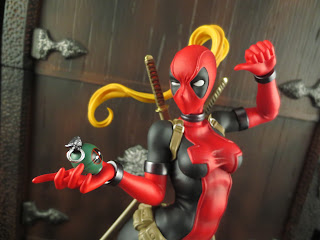 I'm typically pretty happy with Kotobukiya's Bishoujo statues but I really think that Lady Deadpool is up there with some of the best statues they've done. Not only does every bit of paint and sculpting look perfect but the stand looks nice and there are some cool accessories that give the statue multiple display options. I've purchased quite a few statues lately but I have a hard time saying that most of them, even those that cost two and three what one of Kotobukiya's costs, live up to their quality. This is an Epic statue and well worth picking up for fans of this series even if you don't care that much about Deadpool or Marvel. I was pretty set on my Kotobukiya statue collection just being DC, but it has since expanded a bit and this is the first Marvel piece I've acquired.  I think I'll go ahead and pre-order Spider Gwen now, too...

I haven't reviewed any other Deadpool Corps characters on the site although I have reviewed a few other Bishoujo statues from Kotobukiya's DC Comics series: