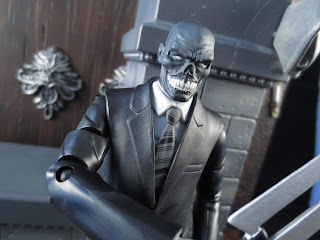 Whenever you're setting out to make a DC Comics line of action figures, it's pretty tough to go wrong with putting any of Batman's villains into the roster. Seriously, I never get tired of Batman villains and it seems like other collectors are pretty much in agreement as we just keep getting them and they just keep selling,. Furthermore, it's always exciting to get a character like Black Mask since he's just not been released as an action figure many times before. This figure was originally released in 2012 as part of the first year of Club Infinite Earths and, at that time, it was only the second figure of Black Mask ever released (the previous one was in a series of DC Direct's Secret Files). Since then, we've received 7 inch and 1/18 scale versions of Black Mask from Batman: Arkham Origins. This guy is certainly the most well articulated, though, and fits in well with the bajillion other DC figures Mattel has made. Is he worth tracking down on the secondary market? Read on and find out after the break... 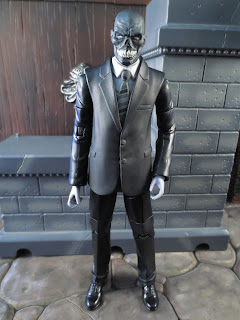 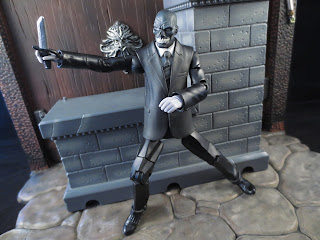 * While Black Mask mostly reuses the standard DCUC suit body that we've seen on many other figures, that's not necessarily a bad thing as it does allow for more movement than most action figures wearing dress suits have. One of the benefits of Mattel's DC figures is that they legitimately feel durable like toys should, something I've never felt that DC Collectibles has ever reached. 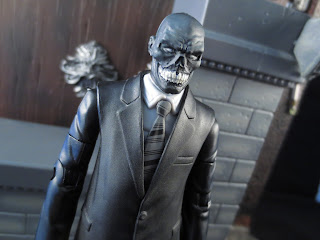 * While the suited body is nothing special, it certainly works for the character. I really like the colors used here Roman Sionis' suit and tie. It's just shades of black and gray but it looks very fitting for the character. The headsculpt, too, looks incredible. What a creepy appearance? Those teeth are absolutely hideous! 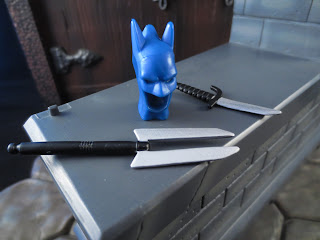 * Sometimes Mattel loads a DC figure up with extras while other times we're luck to get a character's most prominent accessory. Black Mask makes out like a bandit (which he kind of is) by coming with a knife and Batman cowl from the cover of Batman #636 and a double bladed weapon he used once or twice in the comics to dispatch someone he didn't particular care for. Roman Sionis is a bad, bad man. 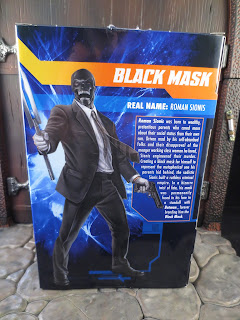 * I don't typically talk much about packaging but A.: This packaging really is easily reusable for storing figures and B.: It has some pretty nice artwork from artist Mike Thompson on the back and the side. It's always great to see some cool images of the characters you're buying toys of and DC Universe Signature Collection totally nailed that concept. I dig the bio, too! 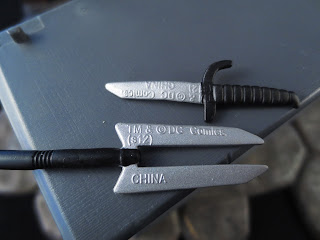 *The good was two knives (which are legitimately based on actual weapons from the comics)! The bad is that these weapons are a bit gummy and they prominently feature some trademark information. Seriously, I don't know of any other company that features this kind of info this prominently on a small accessory like this. Is this just some weird Mattel practice or something? 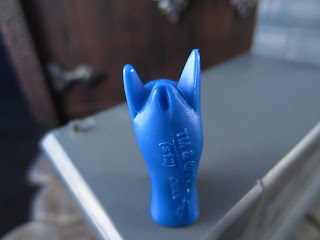 *At last we come to the Batman mask again. Seriously, I'm really not sure what Mattel's intention here was. The comic cover this accessory was borrowed from shows Batman's mask being pinned to the wall by a knife, but the knife can go through the mask. Heck, there's even a little slit on the rear side but the knife doesn't fit there, either. It'd be nice if Black Mask could hold it, but it doesn't work like that either. Seriously, this seems like it had some potential but I have no idea what the purpose of this accessory was intended to be. 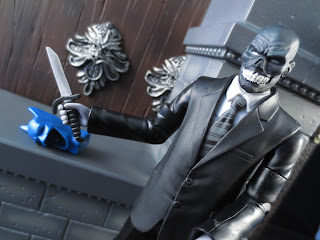 Black Mask was a great edition to this series and honestly he was one of the figures I really regretted missing. Fortunately, due to a trade on The Fwoosh, I as able to pick this guy up. While the accessories are petty disappointing (that Batman cowl could have been legendary) the figure itself is solid. Not anything terribly exciting, but it's always good to get another version of a less prominent Bat-villain. Roman easily merits a Good and a 1/2 rating and should definitely find a way onto your Mattel DC toy shelf. He's not as good as the DC Direct secret files, but he's far more articulated and modern.


The only other Black Mask figure I've reviewed on here is the above mentioned Arkham Origins Black Mask.