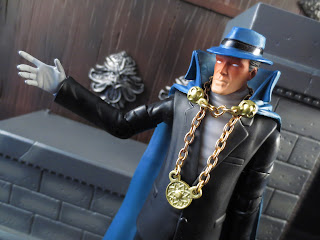 It's time for another review from the DC Universe Signature Collection from Mattel! I love DC's mystical and magical characters so I was thrilled when a recent trade I made netted me quite a few figures from that area of the DC Universe, particularly the subject of today's review: The Phantom Stranger! A mysterious character with mysterious origins, the Phantom Stranger is kind of like Zodac from Masters of the Universe in that while he seems to favor good, he apparently just can't get involved. He was released as part of the second (and final year) of the DC Universe Signature Collection Club Infinite Earths. Honestly, picking up this figure and reading a little bit about him has me kind of interested in going back and picking up a few Phantom Stranger trades or something. The guy seems pretty interesting. Is the figure as interesting as the Stranger's 64 year publication history (yup! This guy first appeared in 1952!) Find out after the break... 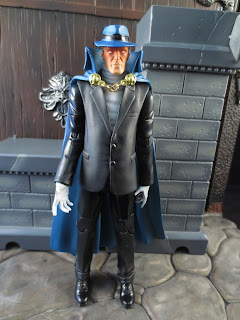 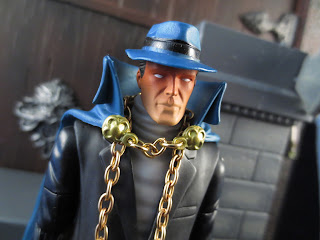 *Since he's so mysterious, the Phantom Stranger likes to keep his face obscured by the shadow of his hat. That's a tough feat to pull off on an action figure though, so Mattel opted to kind of do what Hasbro did with the Vietnam Era Snake Eyes figure and paint some shadows over his face. It actually looks pretty decent in person and gives him a rather unsettling presence. 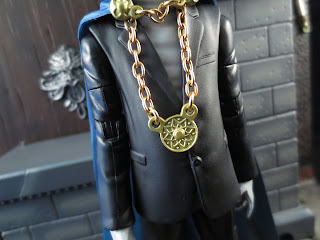 * The medallion around the Stranger's neck is actually removable and, like the chain on his cape, it is actually made from little metal chain links. It's a pretty slick design that gives the figure a much classier and more arcane vibe than just a suit with a sweater and cape along can provide. 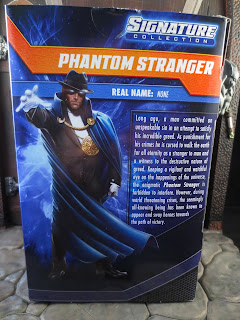 * Again, I just love to draw attention to the Mike Thompson artwork on the back of the package. The DC Signature Collection uses collector friendly packaging which means that it not only looks nice but that it can also be opened and sealed again without damage to the package. 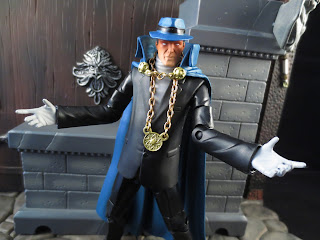 * While the Phantom Stranger is just a mysterious guy in a suit, he does have a decent range of movement. Seriously, how many other suited action figures can move as well as Mattel's DC figures can? The hands also give him a cool, jazzy appearance. Remove the hat and creepy face and replace it with something more normal, trade out the medallion for Austin Power's necklace, and you have a 60's style swinger for your shelf. 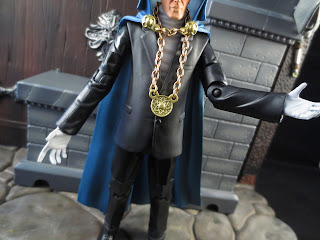 * If you look at most depictions of the Phantom Stranger, the medallion around his neck is supposed to be a part of the chain holding his cape in place. Here, though, Mattel made it into a necklace. I'm cool with that, but it's way too long. He looks like he should be headlining the world's most un-hip rap video or something.

* Maybe an extra accessory would have been nice, too. He's a bit light compared to other figures in the line. 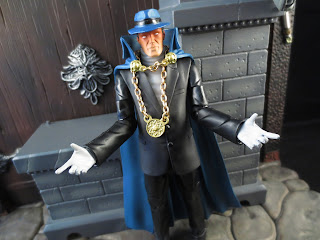 I really like this figure. I'm sure some folks will find him a bit plain but I think he was pretty well executed. There's not that much about the figure that really stands out, but I feel that's true of the character. The expressive hands, gold medallion, newly sculpted cape, and unsettling headsculpt do all work together to create a really cool and mysterious character who will look great hanging out with Zatanna, Constantine, Hellboy, and Dr. Strange. He's a Great figure and well worth tracking down if you're into the spookier side of the DC Universe.