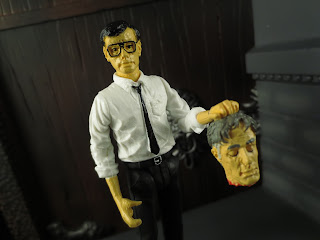 A few weeks back I was checking out my blog feed and saw that Phantom Troublemaker over at Needless Things had just reviewed a new action figure I wasn't even aware of which I ordered immediately: Dr. Herbert West from the film Re-Animator.Dr. West is from Amok Time Toys' Monstarz range of products which seems to encompass products from a number of different licenses released in a variety of different styles.  Dr. Herbert West has a lot of similarities to a Funko ReAction figure in that his packaging and design is clearly inspired by vintage Kenner action figures. Of course, Herb is actually a more sophisticated figure than Funko's ReAction offerings. While I've been growing a bit disinterested in the ReAction styled figures as of late this one really interested me due to both the license and the really cool accessories. Plus, there's always a place for him alongside the H.P. Lovecraft inspired Legends of Cthulhu line. Ready for a quick look at this Lovecraft and 1980's horror inspired action figure? Then join me after the break... 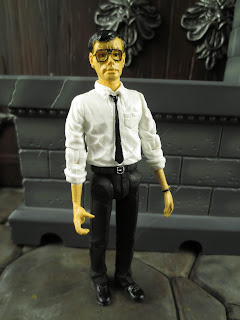 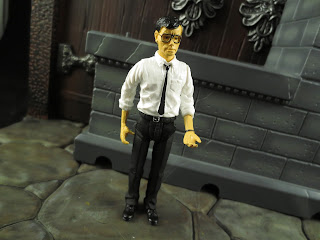 * As I mentioned above, Amok Time Toys has definitely based this guy on the vintage styled figures but there is some improved articulation. The hinged elbows, swivel waist, and swivel right arm definitely make this a more interesting figure to display than your standard ReAction figure. He feels fairly sturdy, too. I like the plastic quality on him better than some of the earlier ReAction figures. 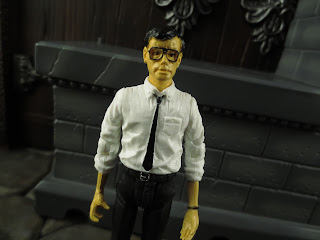 * Overall, Herbert is a pretty decent looking figure for this style. The body sculpt is a bit more detailed than other faux-retro styled figures. It's a simple shirt and tie with dress slacks but there are some nice finer details present. The paint work is really clean, too. I like that the dress shoes are actually a bit shinier than the slacks. 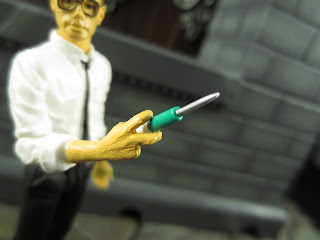 * The first of Herbert's two accessories is the  syringe filled with the reanimating agent. It's a small accessory that has three separate paint applications and a fairly sharp looking tip. It easily fits into the figure's preposed right hand to prep the good doctor for some reanimating action! 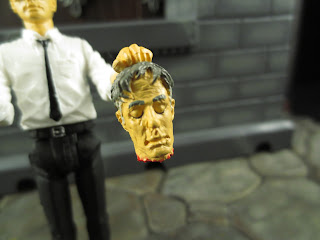 * The cooler accessory is Dr. Hill's head. It actually comes attached to an interchangeable left hand that can easily be changed back and forth with a standard loose-gripped left hand. The sculpt is quite good, better than Dr. West's actually. I'm really glad they went with this, although I'm curious as to why they went with a closed eyes expression. 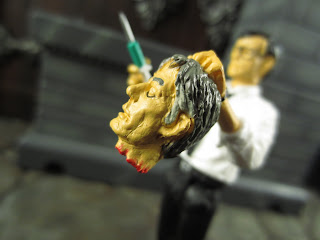 * Here's a side view of Dr. Hill's head. Check out the paint detail! It's actually quite impressive for this scale. I love the bloody neck, too. It's bright and vibrant and perfectly captures the gory feel needed for this recently decapitated head! 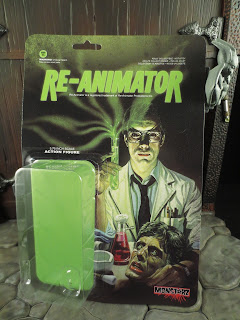 * Here's a quick look at the card and the great artwork on the front. The nice thing is that if you choose to display this figure carded alongside your ReAction or Bif Bang Pow! collection you should have some nice consistency so far as packaging style and size go. One difference here is that there is a plastic tray holding Herb and the accessories in place. 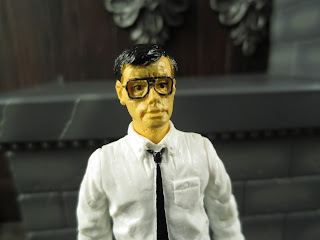 * I'm not a huge fan of the headsculpt here. I know that the faux-vintage lines tend to not have extremely accurate headsculpts (it's kind of part of the charm of the style) but that's not what bothers me. What actually seems weird is that the head had a weird texture to it. It almost looks like it's carved out of wood, which is a really strange texture for a human face.

I know not everyone's into this style of figure but if you are, or more likely if you're a fan of Re-Animator, I think you'll be pretty pleased with this toy. The package together, including the excellent accessories, is really quite fun. Whether you put this guy on a shelf of horror toys or have him displayed in the package next to other memorabilia from the film, you'll have something rather unique from an underappreciated gem. I appreciate that Amok Time Toys often releases figures from less well known properties and markets them to a niche audience and I can definitely say they've done a Great and a 1/2 job here with Dr. Herbert West. Hopefully they'll release the long anticipated 6 inch figure they've teased for a few years now, as well. That's be just fantastic.


This is the first Re-Animator figure I've reviewed on here but I have reviewed a number of other faux-vintage horror figures from Funko and Bif Bang Pow!: