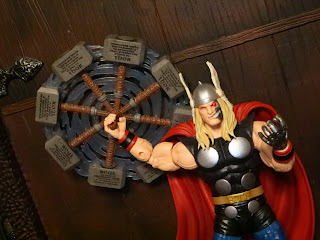 Hasbro did release a few comic based figures outside of the Thor: Love and Thunder movie based series and one of them is Ragnarok, a clone of Thor who, ironically, did not appear in the film Thor: Ragnarok. I'm passingly familiar with the comic Civil War but I wasn't aware of Rangarok's presence in the story. Built by Tony Stark, Reed Richards, and a Skrull disguised as Hank Pym from a lock of Thor's hair that Tony's been holding onto for years, Ragnarok looks like Thor but is wildly unpredictable. He seems to go on killing sprees often before getting defeated by Hercules and then Thor himself. Ragnarok is a Target exclusive and comes in an oversized box since he's a fairly hefty figure with a really cool accessory: A swinging Mjolnir effect. Ragnarok was cool on his own but if it weren't for this Mjolnir effect I probably wouldn't have picked him up. Accessories matter, people! Let's take a look at Ragnarok after the break and see how he fares. 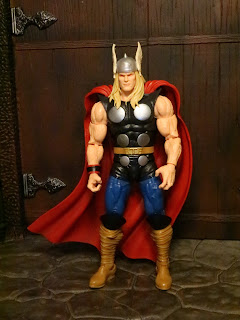 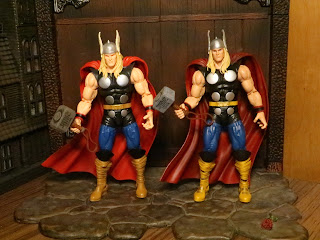 Comparison:
* On the left is Ragnarok while the 80th Anniversary Thor is on the right. What's the difference? If you use the undamaged head for Ragnarok and the standard hand, nothing but paint. Ragnarok's cape is a little brighter, his skin a little lighter, and his boots are less detailed. He's also got red eyes. I wonder why they didn't give him a bald head, though, as that seems to be one of Ragnarok's main looks. 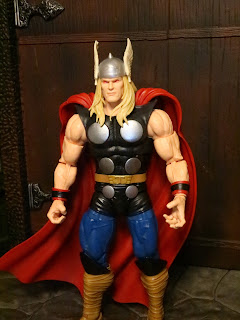 The Positives:
* If you don't have the 80th Anniversary Thor, you'll be surprised at how good this body is. While it's a very classic and simpler design for Thor, the elements like the steel circles and the belt are separate, sculpted pieces, as are his wrist guards. There's some serious heft here that makes Ragnarok nicely intimidating without seeming oversized. The paint applications are neat and clean overall and with a little modification you could easily turn him into Thor if you're looking for a classic comic version of the big guy. 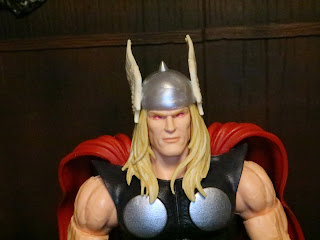 * Hasbro didn't include a bald head with Ragnarok but they did include the standard Thor head with red eyes. I do think the bald head would have been more exciting but this is still a pretty nice portrait. I like the shiny helmet and the red eyes. I'm guessing Hasbro was betting on some folks picking this up just because it pretty much looks like a regular Thor. 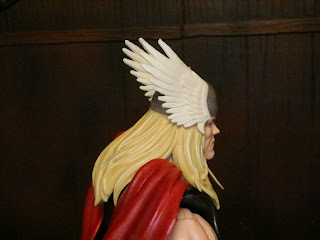 * The oversized wings on the helmet are really cool. They're nicely detailed and look rather dramatic. They're not bent or anything, either. they came out really well. 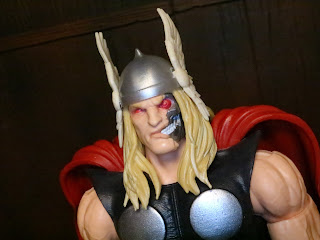 * The second portrait, and probably the most exciting one, is the Ragnarok head with his robotic face revealed from underneath his skin. I'm always a fan of figures with this Terminator-like appearance and Hasbro did a nice job. Check out how the left eye is larger than the right? Brilliant. 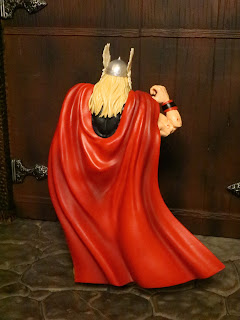 * The cape isn't overly detailed but it looks good, doesn't fall off (it's permanently attached), and actually provides a bit of support when standing Ragnarok up. 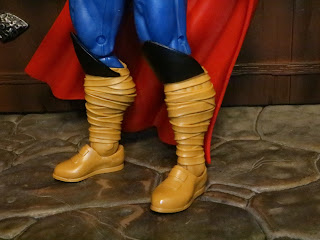 * Ragnarok's boots are really cool with a wrapped look to them that definitely makes them more interesting than your average boot. 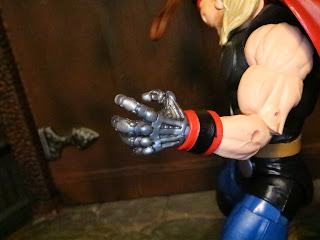 * You can remove the standard left hand on Ragnarok and replace it with this cool robot hand. Is this a new piece or is from some other figure I just don't recall off hand? 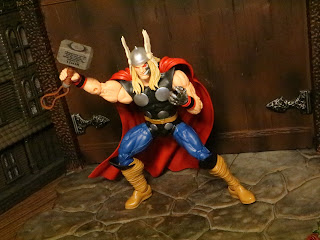 * The articulation is great on Ragnarok. It's the same as the 80th Anniversary Thor and while it doesn't have "butterfly" joints or anything, it's still a great figure with a lot of mobility and a great range of motion in the joints. Ragnarok's a big guy, too, so he's heavier than your average Marvel Legends figure. Sturdy, too. 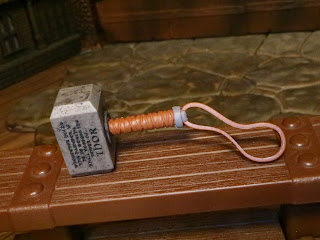 * While this isn't technically Mjolnir (it's some sort of electrical weapon Tony Stark made) it uses the sculpt from the 80th Anniversary Thor's Mjolnir. So it's not Mjolnir, but it looks exactly like Mjolnir. It's a faux Mjolnir. The hammer has an excellent sculpt with great paintwork that makes the head of the hammer look really powerful, like actual stone or something. There's a loop on the bottom to keep up the disguise. The head rotates, too, though that's probably just to help with the manufacturing process. 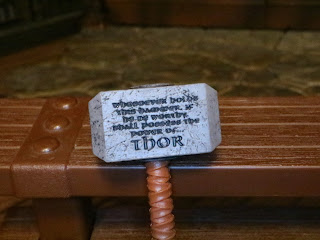 * The etching on the side contains the whole Thor spiel and it looks great. It's very legible and there's a wash on the engraved letters to help them stand out. 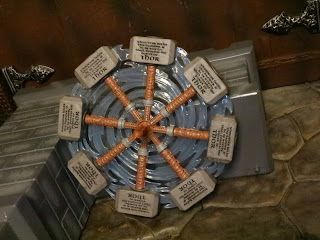 * The coolest part of Ragnarok is that he comes with a new effect piece mimicking Mjolnir being spun around. This really seems like something you'd want to use with Thor rather than Ragnarok, and that's exactly where mine is going. It's made up of eight Mjolnirs, each with the Thor passage on the side, and a single loop in the middle. The idea is to make it look like one hammer spinning really fast. It's not a perfect effect but it's so cool that I can't help but love it. 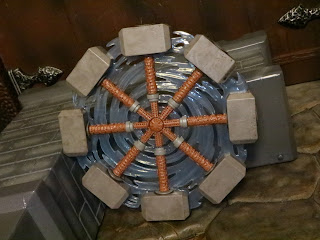 * There are blue swirls of energy connecting the multiple hammers to give off the illusions of motion. Also, you've got multiple neat, clean paint applications on each hammer and the cool stone looking paint effect on the heads. 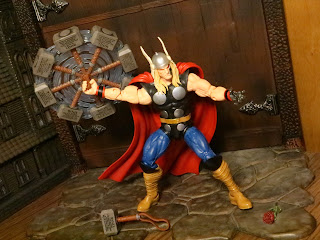 Ragnarok wasn't a character I was waiting for and, in fact, I didn't really even know the character before hearing about this release. It turned out to be a very good figure, even at the higher price it's being sold at. Two portraits, excellent articulation, a really impressive single Mjolnir, and especially the spinning Mjolnir effect make this an impressive package. That spinning Mjolnir accessory is impressive and nicely spices up your regular Thor figure while adding another bad guy to the shelf. This is an Epic set that definitely manages to add some value to what might just seem to be an easy repaint.