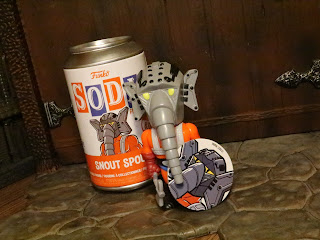 Snout Spout is a fairly recent standard release from Funko's Vinyl SODA line that's been shipping from e-tailers recently. Mine arrived from Big Bad Toy Store a couple weeks back and while I didn't get the variant (he's more metallic looking and holding the Jaws of Life from the 200x Staction) I'm still glad to add another Snout Spout to the collection. Snout Spout has a deluxe Masters of the Universe Origins figure coming out soon, too, but he's rarely a character that gets a lot of merchandise. He's definitely a very gimmicky character from late in the vintage line but there's still something charming about him. I'm pretty sure I got the vintage toy as a Christmas gift as a kid, maybe in 1986 or 1987. I like this heroic firefighting elephant even though he seems like something more fitting of a TMNT concept than MOTU. Still cool, though. Let's check out his Vinyl SODA after the break... 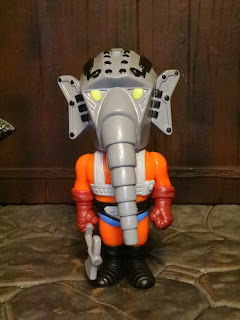 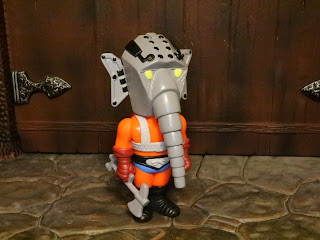 * I'm still a huge fan of Funko's Vinyl SODA figures. While they're just solid, vinyl figure that look like the breakfast mascots of the 1970s, there is something I absolutely adore about them. The simple and stylized aesthetic is excellent here and really works for MOTU. They stand well, they're bright and vibrant, and they look amazing on display. 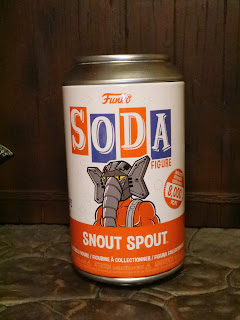 * I'm still a fan of the cans these come in! The soda can design is incredibly cool and makes for a rather unique display piece on a shelf. What would Snout Spout soda taste like? I'm thinking of something blue and refreshing, kind of like Sonic's Ocean Water. You know. I guess I'm thinking he'd spray refreshment from his trunk. The can displays all of the expected labels while the back shows off the figure and includes all of the legal info, etc. The top of the can separates so you could use the can to store trinkets as well, and it's even sculpted to look like the top of a soda can. It's made from a much more durable metal than your average soda can, too, so it's quite a nice collectible. 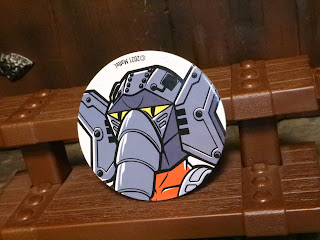 * Inside the can is a round, sturdy cardboard disc. It's kind of like a POG, though a bit larger. On the front is Snout Spout's wonderfully animated mug. The back has the figure's name and the edition size. 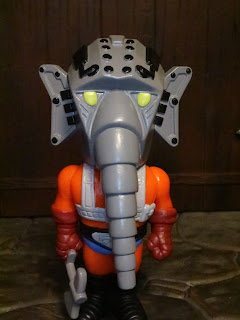 * Snout Spout's outfit is usually overlooked due to his massive trunk but it's an interesting design that definitely that's been interpreted as an Eternian firefighter's uniform in some MOTU media. It's an orange bodysuit (I presume that's a bodysuit and that Snout Spout isn't orange) with a great harness for his backpack and blue trunks. There's a pouch on his harness, a symbol of some firefighting tools on his belt, and some heavy duty gloves and boots offering up some protection. The paint is neat and clean and the colors are all nice and bright where they should be. 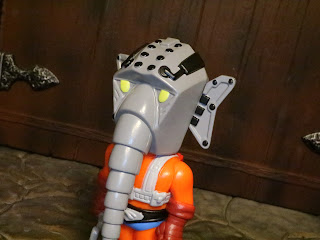 * Snout Spout's head is crazy in a good way. He's a robotic elephant. Who fights fires with his trunk. That's both bizarre and charming. Jaxton (that's his real name) has been depicted as both an Eternian and an Etherian. He's also been depicted as a regular person who was subject to a Horde experiment and turned into a robotic elephant or just an elephant guy from a race called the Hosers. Heck, his name has been given as Hose Nose and Snout Spout. He's all over the place but his robotic elephant head/ helmet/ whatever has remained fairly consistent and he looks darn good here. 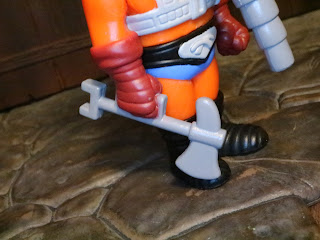 * Snout Spout is toting an axe with a pry bar on the bottom, another piece of equipment that really ties him in with being a firefighter. While it could certainly work for combat it's main intention seems to be as a useful tool for rescuing Eternians or Etherians from fires and other dangerous situations. 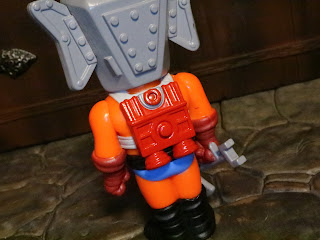 * I really like how Snout Spout's backpack turned out. On the vintage toy this was where you filled the toy with water but it also functions just fine as a cool looking backpack. Maybe there is a reservoir in there in universe so he can store extra water for firefighting operations? 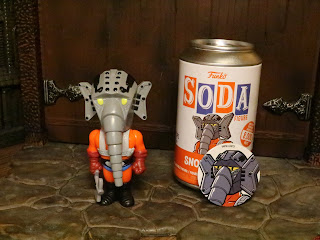 I really like Snout Spout. He definitely gets the short end of the stick when it comes to MOTU toys (there are a few guys below him but not many) but he's a cool character. I'd love to see him show up in one of the ongoing animated series as he seems like a fun character to develop further. The Vinyl SODA of Snout Spout gets a Great and a 1/2, though. Excellent detail, a fun, colorful design, and a fun, eclectic choice. I'm always excited for a MOTU toyline that finishes the vintage cast and while Funko has a long way to go with either POP! vinyls or Vinyl SODA, seeing Snout Spout gets me a little more excited than I was before at the possibility.


The only other Snout Spout toy I've reviewed is the 200x inspired Snout Spout head from the MOTUC Heads of Eternia set.