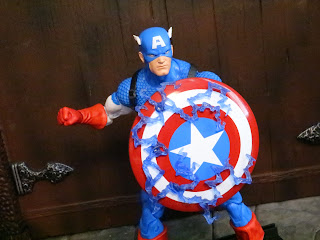 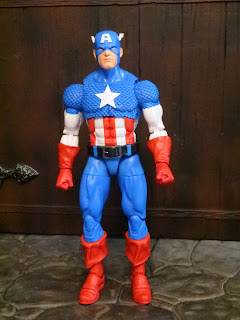 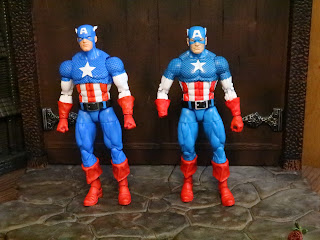 Comparison:
* On the left is the 20th Anniversary Captain America while the Retro Collection Captain America is on the right. From the mid-torso down they're the same figure but the shoulders, upper chest, and head are new as Cap is sporting sculpted armor rather than just painted on armor on the 20th Anniversary version. The colors are better, too, with Cap's blue being bolder and the red details having some shadowing on them. Definitely seems more Silver age than Golden age. And yeah, my Retro Collection doesn't have his right had on. I had him with the throwing shield effect and just took it off for the picture. 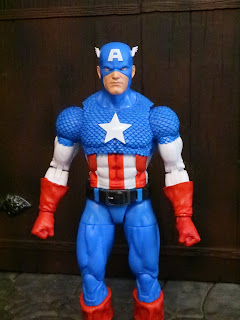 * Captain America looks fantastic. This is a bright, bold depiction of Steve Rogers sporting the red, white, and blue uniform that has become one of the most iconic outfits in comic book history. The paint and color choices here are excellent and everything is super neat and clean. Captain America's star isn't painted on here; it's actually a sculpted element, as is his belt. It's a (non-removable) separate piece that looks fantastic. 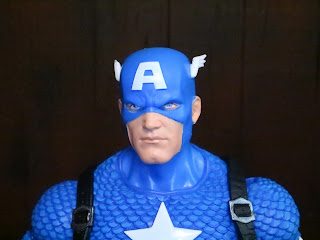 * The headsculpt is new as far as I can tell and it looks great. It's very stern. This isn't Cap getting ready to record a motivational video about getting detention or patience; this is Cap getting ready to go up against the baddest of the baddies. The wings and "A" on his hood look fantastic and the facial details visible beneath look perfect. Honestly, I think this portrait outdoes the Mezco one. 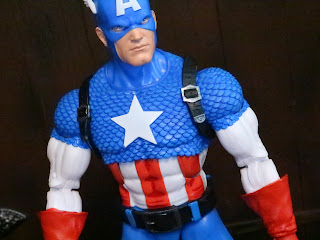 * Not only are the scales on Cap's armor sculpted and given some highlighting but he also has a removable harness that fits over his shoulders for toting his shield around. 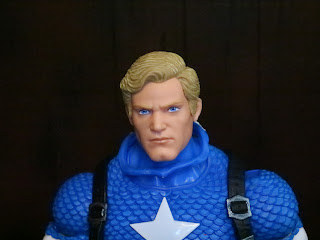 * Cap comes with an unmasked head so you can have Steve lead the team with his handsome mug on full display. He definitely has a chin that could give Bruce Campbell a run for his money. There's been a lot of mention that the unmasked headsculpts in this line looks like the 1970s depictions of the characters, especially with that wavy hair. 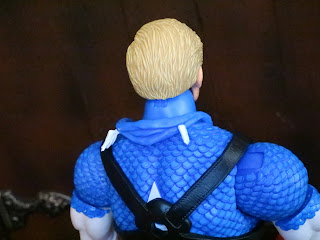 * When you're display Steve without his mask Hasbro also included a hood piece. It's a ring (a few Wolverine figures have had these) that fits around the neck and makes it look like he's pulled his hood down and it's just hanging there. It's a cool look and fairly convincing. 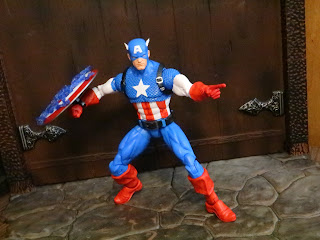 * Cap is articulated like you standard Marvel Legends figure on the market today, so you know you're getting excellent articulation. While there aren't any "butterfly" hinges on the shoulders, the figure still has an excellent range of motion in almost every joint. You can get lots of awesome poses out of him, especially when interacting with his shield or using some of his alternate hands. 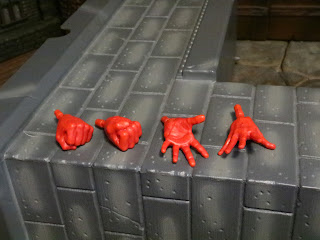 * Cap comes with six alternate hands, four of which are pretty standing. You've got some fists for punching the Nazis (vintage or modern, he'll punch them all) and some gesturing hands for "throwing" his shield or just waving at his adoring fans. 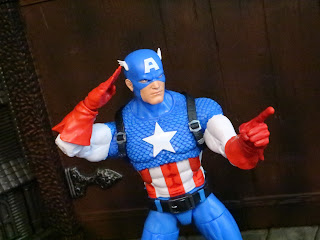 * The other two hands are a saluting hand for Cap's right hand and a pointing hand for Cap's left hand. They're really well done and definitely make posing him more fun. I love when characters get more unique gestures like this rather than just the standard set of hands. 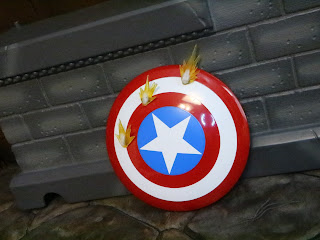 * Let's talk about Captain America's shield as it's definitely both a major selling point of this set and a point of some controversy. I believe the shield is a bit larger than most previous releases but it looks fantastic and has three holes where different energy effects can plug in. First up are a set of what look look deflected bullets. There are three of them (they're all a bit different) and they look great. There's a lot of motion present in the sculpt and it really sells the effect. 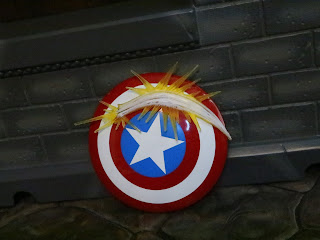 * Next up is a longer energy effect that covers all three holes. I think it's supposed to be energy being deflected from a sword or melee weapon of some kind. I'm sure plenty of creative photographers will have a ball finding ways to use this piece. 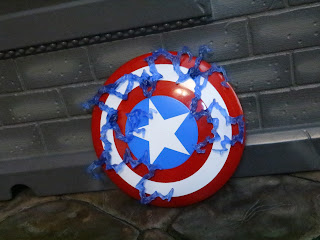 * My favorite look is this blue energy crackle that covers the entire face of the shield. It's a neat looking effect that fits on the shield perfectly and just looks really fantastic on display. Is Cap deflecting the beam from a powerful energy weapon? Is he wielding Mjolnir? So many possibilities. 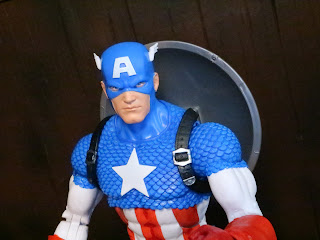 * The shield has one of those hinged wrist cuff/ peg combos, so you can fold the wrist cuff down and use the peg to store Cap's shield firmly on his back. 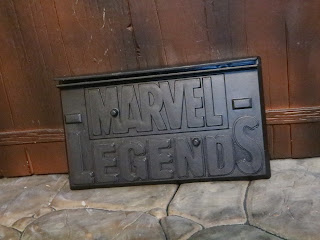 * The 20th Anniversary Marvel Legends figures come with a flat display stand with the Marvel Legends logo on it. The stand is quite nice and I'd love to see Hasbro start including them with every release (or at least a stand of some sort). 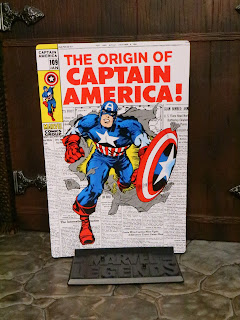 * Rather than getting a full comic book like the original Marvel Legends figures Hasbro has included a cardboard backdrop piece. One side shows the ruins of a war-torn city from World War 2 while the other has a classic comic book image of Captain America. 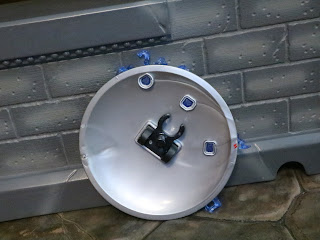 * First up, I really wish the shield had some actual straps or something. There have been many, far nicer shields released in Marvel Legends and other lines, so why keep using this bland design? It looks kind of cheap from the rear. 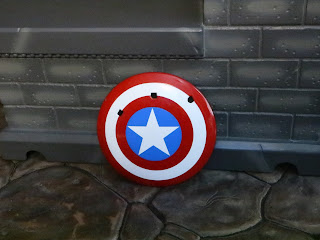 * Second...if you want to display Captain America without any energy effects you're going to have to deal with holes in his shield. It's just kind of a weird issue. Imagine a "deluxe" Darth Vader figure who only came with a lightsaber with energy effects attached or a He-Man figure with a Power Sword that you couldn't remove the transforming lightening energy from. That's kind of how this one feels. I love the effects but not having a standard shield is still a weird choice. 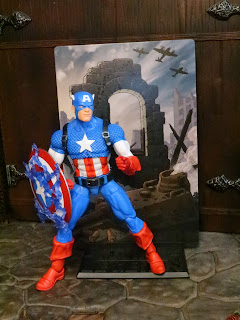 The shield decision is a little weird but everything we get with this version of Captain America does make him feel more deluxe than your average Marvel Legends figure. With two portraits, a very nicely detailed costume, and lots of shield effects, this definitely feels like a very definitive Captain America. So far as Marvel Legends Steve Rogers Caps go, this is my favorite of the five or so I own. It would have been nice to have had a standard shield and maybe the shield throwing hand, too, but what's here is still quite nice. Overall, this version of Captain America gets a Great and a 1/2. I'm not sure I need Hasbro to keep going with these, at least not if they try to remake series 2. We already have a couple good versions of Namor, plenty of the Thing and the Human Torch, though I wouldn't deny folks another really good Doctor Doom with some killer accessories and a Doombot alternate head.