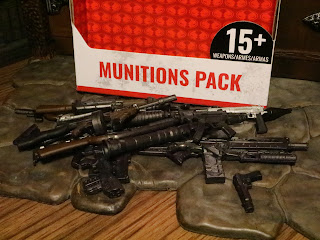 A few months ago Shartimus Prime released a lengthy interview with Todd McFarlane of McFarlane Toys that mostly covered the DC Multiverse line. I don't collect the DC Multiverse line but I'm always interested to hear some behind the scenes stuff on the action figure industry from an insider and the Toddfather definitely shares some interesting stuff. One of the most fascinating topics of conversation that popped up in the interview was the issue of Warner Bros blocking most merchandise based on their properties from coming with firearms as accessories. It's not something that McFarlane can do much about as a licensee but it definitely effects the products he and other makers of product based on Warner Bros owned properties produce. Characters like Red Hood, Arkham Knight, Two-Face, Hush, Joker, and the cast of Suicide Squad are known for toting around guns but all toy manufacturers can put in the package with them are melee weapons and different hands. For their Golden Age Two-Face Mezco got around this by releasing a separate, unbranded kit of  weapons called the Double Trouble Weapons Expansion Pack that went on sale the same time as Two-Face. In the referenced interview, McFarlane mentioned that he might make a weapons pack of various firearms that could be used with Spawn and other toylines, subtly referencing that you could always let these weapons migrate over into the hands of your DC Multiverse figures. A couple months later McFarlane Toys put up a preorder for this exclusive Munitions Pack of 17 firearms and just within the last week or so it's been shipping out. Want to check this out and see if your figures could benefit from some extra firepower? Then join me after the break... 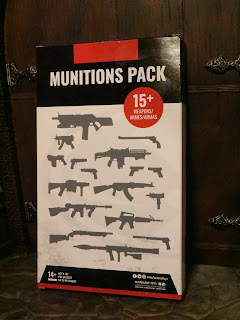 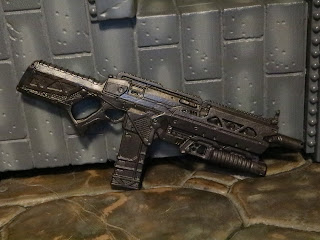 * The Munitions Pack has a decent assortment of weapons that are all molded in quite solid plastic. It's neither brittle nor rubbery. First up is a really cool looking assault rifle. It's definitely very modern and seems like one of the more modern/ futuristic weapons in the set. There's a lot of sculpted detail on this piece, an extended magazine, and an underslung grenade launcher. This looks like the kind of gun that Al Simmons likes to tote around or for any commando type figures like Arkham Knight. It's nicely comic book styled but still realistic enough that it's not a laser rifle or something. 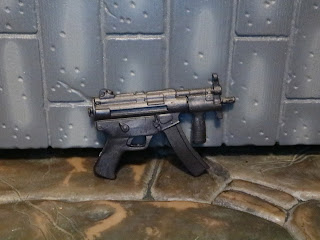 * This standard MP5 is a pretty basic SMG that works well with most 1/12 to 1/10th scale figures. Some of the weapons are definitely too large for 6 inch scaled figures like G.I.J oe Classified Series and Marvel Legends but this one works well with those and the McFarlane 1/10th scaler stuff. It's a basic weapon that should get plenty of use. 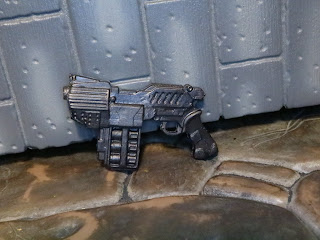 * I'm not quite sure what this pistol is supposed to be but I could see it being useful for Batman. There are a lot of Batman figures that should have some sort of projectile launcher, like the Dark Knight Returns armored batman, so I could see this filling in as a nice non-lethal weapon. It looks a bit futuristic, almost more like a gadget than a standard pistol. 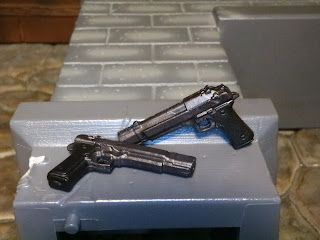 * You've either got two Desert Eagles for two separate figures or a pair of handguns for someone who dual wields. Most of the weapons in this set are just a bit stylized but they look great with McFarlane figures which have a bit more exaggerated proportions than something like a NECA figure. The package says the Munitions Pack comes with 15+ weapons, which seems like a weird way to phrase it. There are 17 guns. Why not just say includes 17 weapons? I think it's because there are 15 unique sculpts with two each of the more standard pistols. 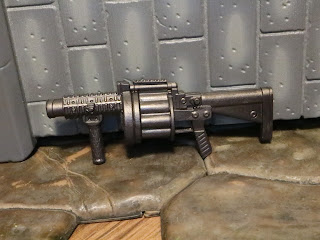 * Need a grenade launcher? I assume this is based on a Milkor MGL with a drum magazine. It's not super detailed and not as realistic looking as some other grenade launchers like Valaverse or Mezco, but it's still a solid weapon. For around a buck or less each, these are definitely quality pieces. 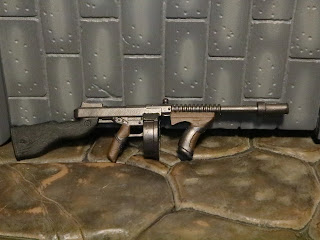 * McFarlane included a more old school weapon as well: A Thompson with a drum magazine. You know, a Chicago Typewriter. While I do think this looks cool with Gunslinger Spawn (even though it would be too modern for him) I imagine it was intended for usage by the Joker. McFarlane has produced a number of Joker figures in DC Multiverse and a classic Tommy gun fits him perfectly. 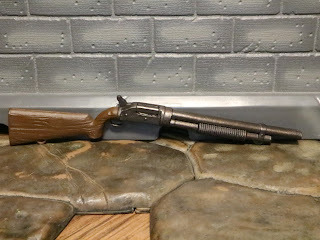 * This shotgun has a very old school feel to it, too, which also makes it feel like it fits well with Gunslinger Spawn. The design of the grip is really interesting and the shotgun even has a prominent hammer. And a pump forearm. What exactly is this model based on? I don't recognize it. It's unusual but, again, perfect for a fantasy character like Gunslinger Spawn. 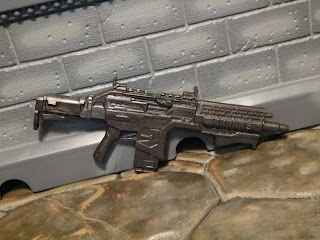 * This is another rifle with some very modern/ maybe even slightly futuristic details. It looks a little like a SCAR but with lots of extra elements on it. It's a bit oversized, so definitely something you'll need to use with McFarlane figures and other 1/10th scale stuff. Probably good for a mercenary like Deathstroke or for Spawn when he gears up and relies on his military experience. 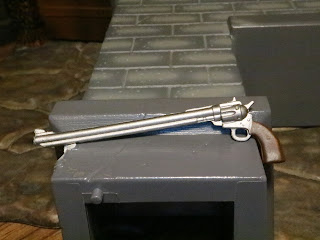 * This revolver is ridiculously long. Look at that barrel. It's the kind of revolver that would really only be useful with an attached stock to turn it into a carbine. Of course, it's also somewhat similar to the revolver the Joker uses in the 1989 Batman film that inexplicably downs the Batwing. My guess? This is intended to spice up your DC Multiverse Joker figures. It's a cool inclusion because I can't think of any other 1/12-1/10 scale action figure versions of it out there. 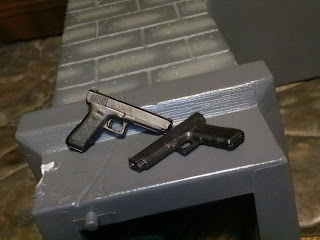 * These two pistols (which kind of look like Glock 17s) are small enough to work well even with figures like the G.I. Joe Classified Series troops. They're nicely sculpted and provide a basic firearm for any number of figures, particularly in the DC Multiverse line. Finally a reason for the Red Hood to use his pistol grip hands, huh? 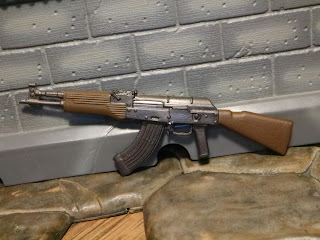 * The AK styled rifle is another very basic weapon that should see plenty of use. It's a bit old school for most of the DC mercenaries and such but your basic thugs and goons might look good sporting them. It's quite sizable and, again, looks appropriate mostly with 1/10th scaled figures. 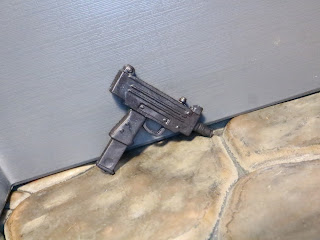 * The micro Uzi is another small SMG that should work with most 1/12 scale lines as well as McFarlane's larger stuff. The sculpt on this is really sharp and it has some nice substance to it despite having "micro" in it's name. 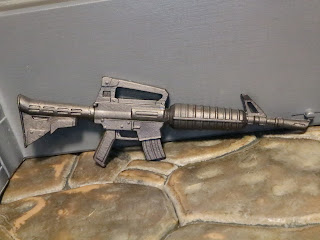 * This looks like it's supposed to be a version of an M16 or a Colt AR but it's really stylized. Honestly, it kind of looks like one of the Fortnite rifles or like something from the Nintendo 64 masterpiece Goldeneye 007. The weapon works fine with Spawn stuff as those guns are usually exaggerated and often wildly impractical but I think a lot of folks are going to find fault with this one. 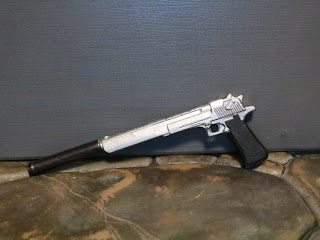 * This appears to be another 50 caliber pistol with a barrel extension and a suppressor. It's a cool weapon though probably wildly impractical. Still, coolness counts and this one is pretty darn cool and pretty unique. Nice paintwork, too. 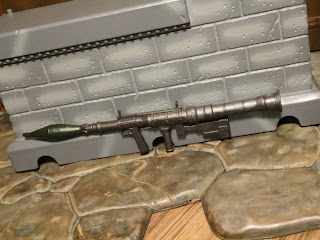 * The last weapon is a RPG of some sort. It's a large weapon that, again, leans more towards a comic book styling than real world accuracy. The exhaust on the back is hollow and the projectile tip is given a green paint application. 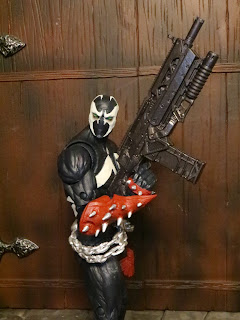 * Here's a few shots with some various figures and the weapons from the Munitions Pack. Here's the Spawn from the deluxe set with the throne carrying that massive rifle. This thing is definitely oversized but, again, it matches the artwork style from Spawn and it looks fine with him. Definitely something for the bruisers to carry. 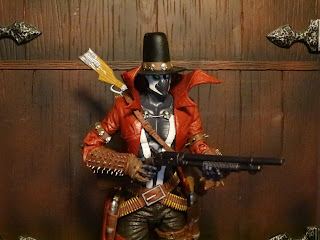 * Here's Gunslinger Spawn with that wild shotgun. The size is great on most of these weapons  for 1/10th scaled figures. 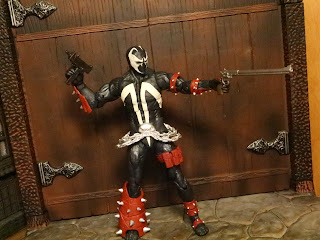 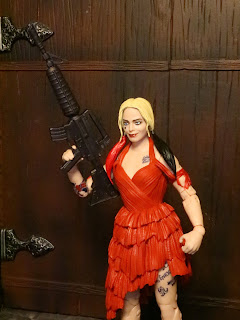 * The only DC Multiverse figure I own is the Suicide Squad Harley Quinn, so here's Harley with that funky Fortnite styled rifle. Considering she's a bit smaller than most figures in the line, I think these will look alright with your DC Multiverse collection. 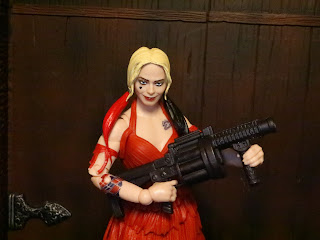 * And here's Harley with the grenade launcher. She handles it quite nicely. 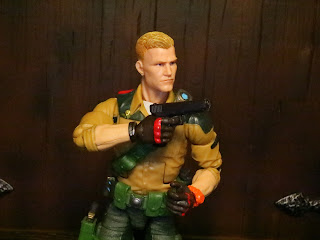 * Here's a shot of Duke from the G.I. Joe Classified Series with the standard Glock styled pistol. It's a pretty good fit. 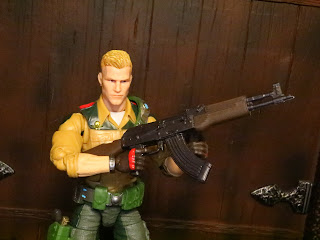 * And here's Duke with the AK-47. It's definitely oversized for 1/12 scaled figures. 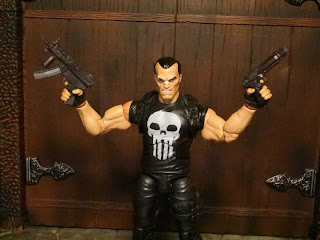 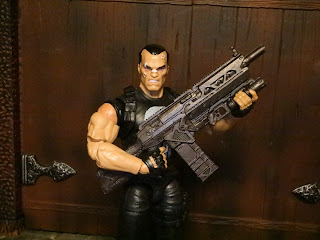 * Here's Frank rocking that oversized monstrosity of an assault rifle. It looks like he's been taking pointers from Rocket Racoon. 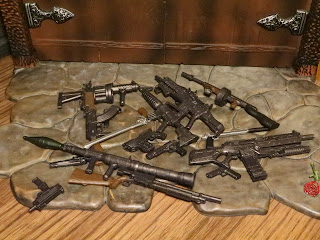 McFarlane Toys releases this set exclusively through their online store and while it sold out, it surely has to come back, right? For $15 bucks this is a rather nice assortment of accessories. Yeah, they're for 1/10th scale figures for the most part but even fans of 1/12th scale lines should find something to like here. For collectors of DC Multiverse and the Spawn line, this is a pretty nice deal. At less than $1 per accessory this is a nice value. A bit more paint detail would have been nice but it's tough to knock the value. This really is a pretty Epic little set that's full of goodies for your 7-inch action figures.

While this set isn't tied to any specific McFarlane toyline, it does feature the Spawn logo on the front, so that's where I'm putting it. For more Spawn reviews check out the following:
The Clown
The Clown (Bloody)
Cy-Gor
The Dark Redeemer
Haunt
Mandarin Spawn Deluxe
Ninja Spawn
Overtkill
Raven Spawn (Small Hook)
She-Spawn
Soul Crusher
Spawn (Deluxe Set)
The Violator (Bloody)
Posted by Barbecue17 at 7/15/2022