Toy Review: She-Ra Vs. Hordak & Monstroid from Masters of the Universe by Mega Construx 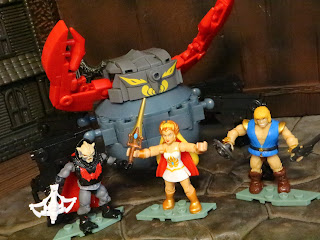 It's been a bit since I reviewed a Masters of the Universe Mega Construx set but now that I've received and built the new She-Ra Vs. Hordak & Monstroid set it's time to check out another great build. Well, the build is just OK on this one but the minifigures are fantastic, particularly She-Ra and Hordak. They're the true stars of this set although the biggest part of it is Monstoid, a robotic beast based on a 1986 toy released in the vintage Masters of the Universe line. Monstroid is fairly uncommon and I've never owned one. I've only even seen him on a handful of occasions, so it's kind of cool to have him released again in some form. Ready to check out this set of characters and a giant beast? Then join me after the break... 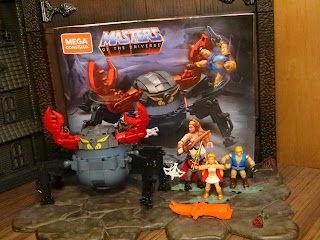 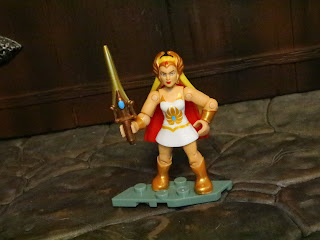 * She-Ra is definitely one of the best minifigures Mega Construx has released. The colors and the paint are just perfection! I love how bright and colorful she is; it's like she just stepped out of the Filmation series. She comes with her Sword of Protection which is actually like the Masters of the Universe Classics sword (copper colored rather than silver), so that's an unusual but cool detail. Her cape is a separate, removable piece as well. Fantastic articulation makes this one of the best She-Ra's out there despite her being so tiny! 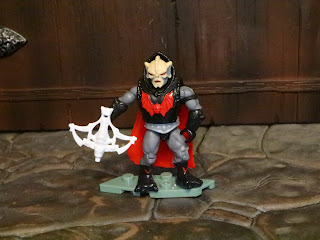 * Hec-tor Kur finally makes his Mega Construx debut as well and he's just as good as She-Ra. The black, red, and grey color scheme looks incredible here and his armor is a new piece that really adds some bulk to him. He even has a rubbery arm band on his left bicep. That's a crazy detail that could have been neglected or just painted on but, no, Mega Construx went all out. Plus, he's sporting a wicked crossbow and a removable cape. Slap that cape on He-Man and you've got a movie inspired Dolph Lundgren He-Man! 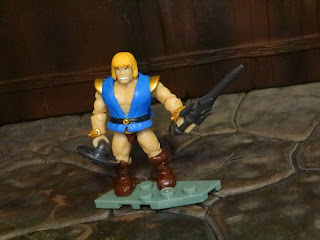 * The third figure in this set is Prince Adam in his outfit from the early minicomics and DC Comics miniseries. The classic Prince Adam was released back in early 2020 so it's just fine to have another version a little over 2 years later. He has a minicomic inspired sword and a shield along with his blue vest. All of the minifigures have those little Grayskull green stands, too, so they can display quite easily on your shelf. 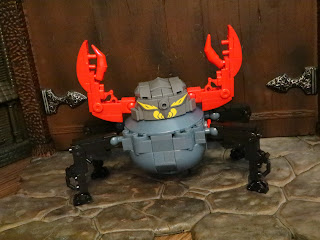 * The actual building in this set is to construct Monstroid, a large, crab-like creature with four legs, a bulbous body, and two crab-like pincers. Monstroid hasn't appeared in much MOTU media (Wiki Grayskull only shows him appearing in issue #3 of the Star Comics series) so feel free to add him to your adventures as you see fit. He's an interestingly designed character; perhaps he'll show up in Masters of the Universe: Revolution or the next season of He-Man and the Masters of the Universe? 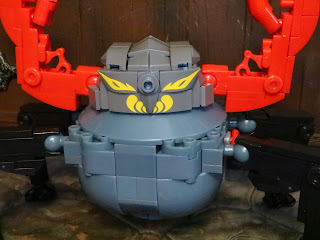 * Monstroid's face is actually made from printed bricks and not stickers. I like how Mega Construx uses the printed bricks most of the time as Lego seems to be using stickers more and more. While the vintage toy is darker and more grayish black and black all around, the color scheme on the brick version still looks pretty nice. 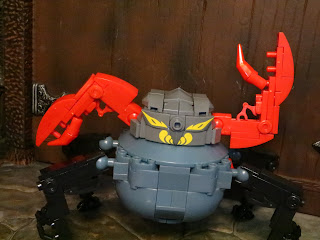 * The arms are pretty cool. They're attached to Monstroid's body via balljoints and have a balljointed claw which allows him to pick up and hold the included minifigures. 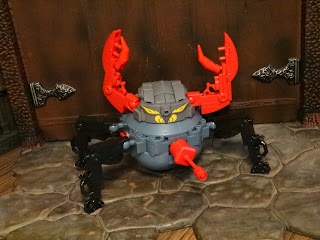 * Monstroid spins around freely and works really well. While the vintage toy used a wind up feature, this one simply has a shaft on the back that causes Monstroid to rotate when you spin it, allowing him to spin his prey around and around. The mechanism works wonderfully and is a really fun play feature. 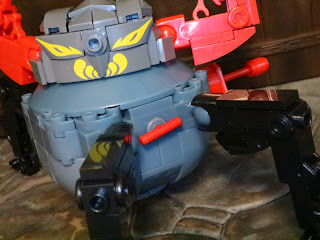 * See the little red bar on the side of Monstroid? That's a throwback to the vintage toy's wind up lever. It doesn't do anything here but it does add a bit more detail to the figure and it's just a fun nod to the original. I think the spinning rod on this version was actually a feature on the original that, when "punched" by the heroes, stopped Monstroid from spinning. 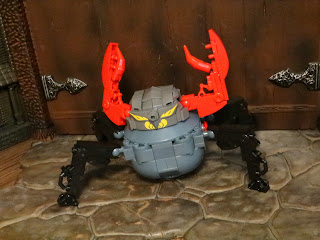 * The only problem I really have with Monstroid is that he's a bit top heavy and his legs often buckle underneath him. They're affixed to true balljoints and sometimes, when you're posing him, they lose their load bearing ability and collapse underneath him, causing his body to sag on the ground. 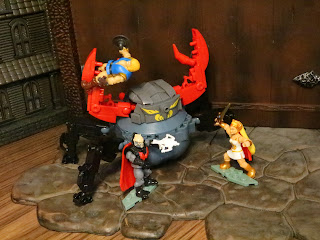 This is a Great and a 1/2 set and while Monstroid is cool, it's really the excellent minifigures that make this one a real hit. I continue to be impressed by how detailed and well designed the Mega Construx minifigures are. They've announced Snake Mountain so it seems this line still has some life in it, though I'd love to see more figure packs released. Of course, it's super fun to see Monstroid redone since he's never been revisited since the vintage toyline. He's definitely an out of left field choice but I really appreciate that. He's the first Monstroid I've ever owned, so that makes him kind of special.


Prince Adam/ He-Man is one of my favorite characters and I've reviewed so many toys based on him that he has his own review archive. Check out Fabulous Secret Powers for all the He-Man reviews you could ever need!

I've reviewed so many different toys and collectibles of She-Ra/ Adora that I've given her a review archive of her own. Check out the Crystal Castle for all of the She-Ra reviews you need to start your own Great Rebellion!

If you're a fan of Hordak then check out my reviews of the vintage Buzz-Saw Hordak, the Masters of the Universe Classics Hordak, "Buzz Saw" Hordak, and the Spirit of Hordak, NECA's Hordak staction and Hordak Mini Bust, the MOTU Origins Hordak, "Buzz Saw" Hordak, and the Filmation inspired Hordak from PowerCon 2021's The Evil Horde set, Mondo's exclusive Hordak, the ReAction Hordak and Hordak (Grey), the Tweeterhead exclusive Masters of the Universe Legends Hordak maquette, the Super7 neo-vintage Hordak, Monogram International's Hordak bag clip, the Sonic kids meal Hordak, and the M.U.S.C.L.E. slime Hordak.