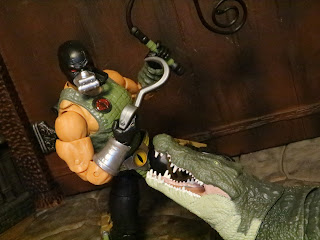 Wow! It's been over 5 months since I last reviewed a G.I. Joe Classified Series figure. There are some great figures showing up right now like Spirit, Storm Shadow, and some folks internationally are even finding Tomax, Xamot, and Stalker, but I haven't found any of those yet. I did just get Croc Master in, however. Well, Croc Master and Fiona, to be precise. Yes, Hasbro has named the crocodile and made her so large and well articulated that she counts as a second figure. Seriously, she's a very cool figure. G.I. Joe has almost always had weird elements in it that went behind just normal military action stuff but the 1987 line really delivered some unusual characters with figures like Raptor, Cobra-La, Crystal Ball, and Croc Master. Bizarre concepts for sure but Larry Hama's characterization of some of these characters still helped to place (most of them) firmly within the G.I. Joe universe. I actually had the chance to meet Mr. Hama a couple weeks ago at HeroesCon in Charlotte, NC, and I did my best to deliver a heartfelt thanks for creating the personalities and world that was a huge part of my childhood. I guess my whole life, really, as I'm a 38 year old guy writing about Croc Master. I like the way that Hasbro is embracing these more unusual figures in the Classified Series and while Croc Master is very much a 6-inch update of the vintage toy, he fits nicely within the line and doesn't feel too out there. The blend of the tactical, the futuristic, and the bizarre in this line reminds me of the Metal Gear Solid Series, which kind of blended those elements together as well. Let's take a look at the Croc Master, a former gator wrestler and burglar alarm salesman who lives every week like its Shark Week, but with alligators and crocodiles instead of sharks.... 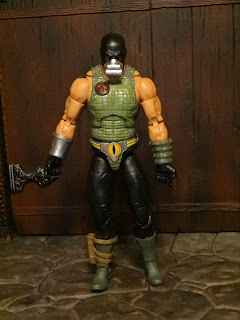 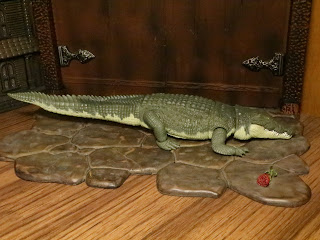 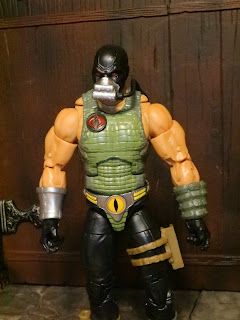 The Positives:
* While most of the earliest figures in the Classified Series had a unique feel apart from A Real American Hero, lately Hasbro seems to be staying more true to the vintage toyline designs. I'm OK with that some of the time but I do like to see some evolutions of the character designs, especially for characters with a more realistic vibe. There's no way someone like Dusty, Bazooka, Iceberg, or Grunt should be using gear from the 1980s. Croc Master works fine, though. He's a weird guy and he probably just wears what he wants. An alligator skin shirt? Sure. He's got bracers, too, one metal and one made of crocodile hide. He's also still rocking that awesome gator eye belt buckle. He's a muscular guy and Hasbro's Joe team did a great job with him. I love the sculpted Cobra emblem, too. It's a fantastic detail. 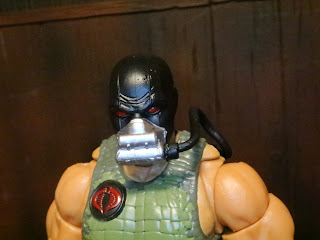 * Croc Master's name is unknown and his face is unknown, too. Every version of Croc Master has been pretty similar except for the Valor Vs. Venom version from 2005, which actually made him green and showed off the upper half of his face. Here, though, he's sporting a skin tight black hood and a silver breathing mask, presumably for helping him to take in oxygen while lurking underwater. The red eyes are really creepy on him, especially in this larger scale. 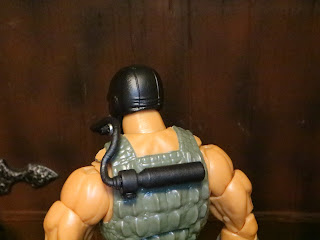 * The small oxygen tank and tube are a separate piece that can detach from Croc Master's mask and back. Presumably it allows him to just chill underwater for short periods or provides a needed supply of oxygen when he has to go underwater when wrestling crocs or gators. This is something that I do wish had been updated a bit as surely a modern piece of equipment would vary from what Croc Master used in 1987. 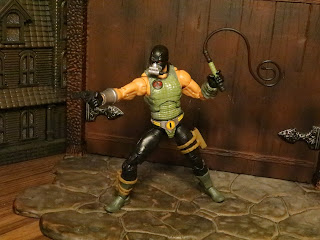 * I like the articulation model on the Classified Series and Croc Master is a joy to mess around with. He has a fantastic range of motion in his plentiful joints (including butterfly shoulders and those hinged hip joints that drop down for a bit of extra motion) and he feels quite durable. He also comes with a nice assortment of stuff to pose him with, so you'll have plenty of fun accessories for your display. 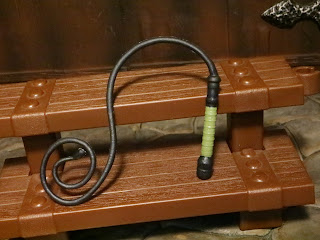 * Let's take a look at some of that cool gear. First up is a whip. The vintage figure came with a whip, too, but I don't remember ever having it. I was pretty young during the 1987 series of Joes and while I had them all, I did lose a couple pieces. This one is all black expect for green on the handle. It is somewhat flexible but it's posed in a somewhat coiled manner. 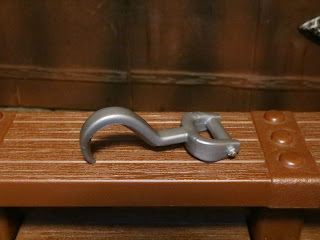 * Croc Master's new weapon is a meat hook. That's what I'm calling it, anyways. What else could it be? I'm guessing he uses this for feeding Fiona and his other animals but he could also potentially use it as a really nasty melee weapon. 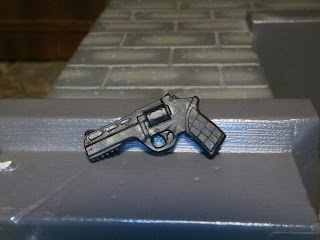 * The vintage Croc Master has a sculpted pistol of some sort on his left hip but it wasn't until the 2008 25th Anniversary version that Croc Master's sidearm was an actual removable accessory. The Classified Series version has upgraded Croc Master with a rather modern looking revolver. It's a sleek weapon that surely packs a punch. The handle even looks like a reptile skin pattern. 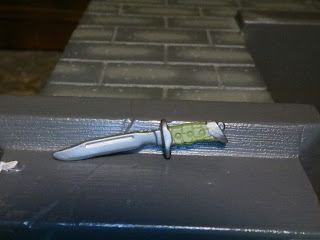 * Croc Master also has a cool knife on his right ankle, just like the vintage toy. It's removable, though, and looks like a custom job. Not many people have knives with gator skin on the handles. 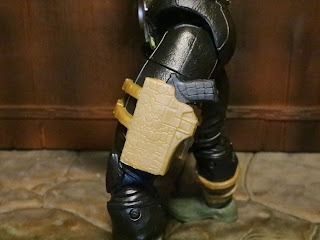 * Croc Master's revolver fits snugly into the removable holster on his left hip. While it has a mottled leather pattern, it is a very light brown. 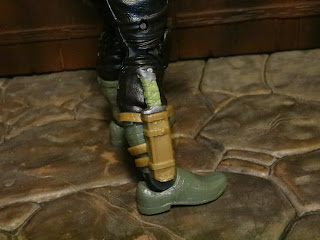 * The sheathe for his knife is on his right shin. It's a separate piece but not easily removable. You'd have to pop his foot off to remove it from him. It also has reptile skin detail on the straps. 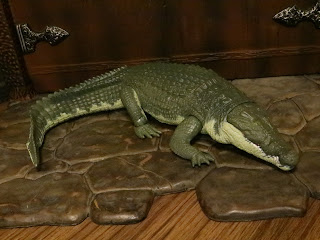 * Let's talk about the most unique part of this set: Fiona! I'm not sure why Hasbro named the crocodile Fiona but it's a really funny idea. Most of the vintage Joe animal companions had names (Order, Timber, Freedom, Junkyard, Max, Polly, Sandstorm, and Finback all come to mind) so I guess Hasbro decided the Cobra pets needed them, too. Fiona is an incredible looking toy crocodile. She reminds me a lot of the deluxe Kenner Jurassic Park dinosaurs with a mixture of harder and softer plastics to give her an incredible texture. The colors are fantastic, too. I'm not a crocodile expert or anything but I think she looks darn realistic. 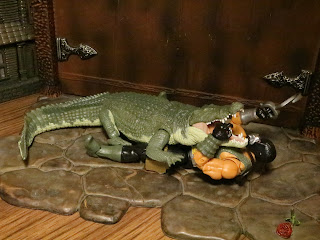 * Fiona is huge, too. At a foot long she definitely presents a huge threat to the Joe team. Look at her wrestling Croc Master! She's a powerful beast for sure. 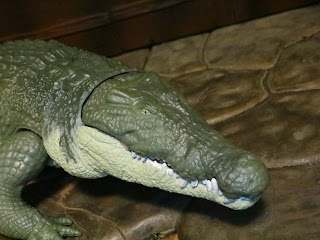 * The headsculpt is good and makes Fiona look really creepy. I find alligators and crocodiles quite creepy, so Hasbro did a great job as I get a bit of the same sense of dread from this toy as I do from the real animals. The beads yellow eyes, the long snout, and the textures of her skin are fantastically detailed. 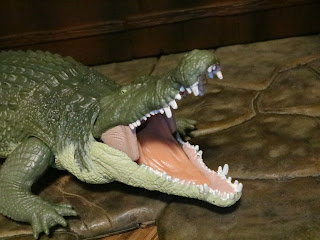 * The hinged jaw is obviously a big selling point, too. Yikes! The teeth are really sharp and pointy and the inside of the mouth has some detail. I wonder if one of the sculptors from Hasbro stuck their head inside the mouth of a real crocodile to get all of the details right? 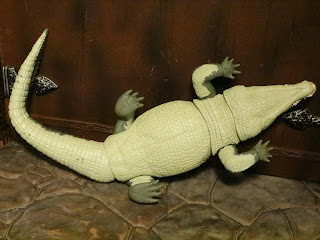 * The underbelly of Fiona is really nicely scaled and much smoother than her back. 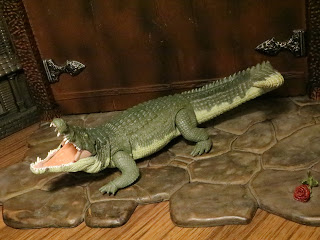 * Animal toys are sometimes to articulate properly it seems but I think Hasbro did an admirable job with Fiona. You've got lots of balljoints all down the body, the hinged jaw, balljointed hips, swivel/hinge feet, and a bendable tail. While no one expects most crocodiles to be able to do karate or anything, Fiona definitely can take some great poses and is really fun to play around with. 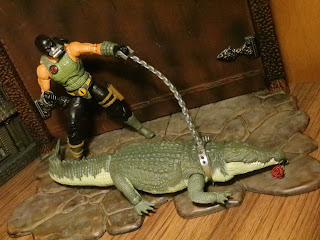 * Fiona comes with a spiked collar attached to a leash, something the vintage figure also had. Now Croc Master can take her on long walks by the beach or use her to intimidate Cobra Commander's enemies. You just pop off her head, place the collar over the neck, and pop the head back on. 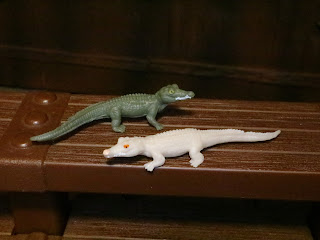 * Fiona also comes with two little crocodiles. One looks like a standard baby croc while the other is a rare albino crocodile. How cute! That's a really fun little extra, isn't it? 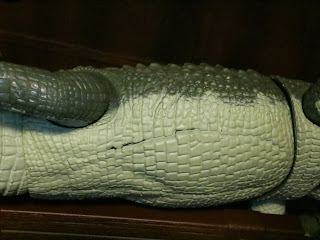 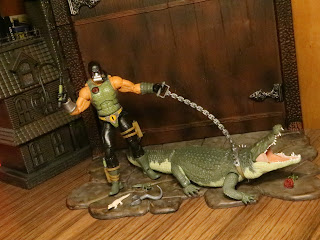 This is a really fun set that definitely captures the spirit of the vintage toy quite well. Everything from the vintage toy that made it fun is here and improved upon with a couple new surprises, too. You know, things like the little crocodiles and the meat hook. It does feel like Hasbro played it rather safe with this one, though, so there really aren't many new design elements here to get excited about but what is here is fantastic. This is a Great set that definitely delivers as a nice edition. I'm loving the Classified Series but I do wish the releases were coming a bit more often. Five to six months between releases seems pretty crazy.