Action Figure Review: Tri-Klops from He-Man and the Masters of the Universe by Mattel 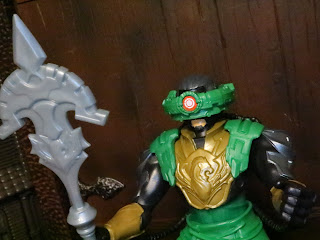 Mattel has put out a new series of He-Man and the Masters of the Universe figures based on the Netflix CGI animated series and I've managed to pick up the full set: Tri-Klops, Mo-Squit'ra, and Stratos. Let's check out Tri-Klops first as he's a pretty interesting figure, especially considering that in the show he's a floating drone (built by Kronis/ Trap Jaw) who attaches over the heads of his victims in order to control their bodies. Wild stuff. It's a very different take on Tri-Klops and I was really curious how Mattel would translate the character to actin figure form. What the ended up doing was giving us a version of Tri-Klops who has seemingly taken over what appears to be a Palace Guard. In the second season of the show Tri-Klops did take over King Randor and one of the Hand Witches but here it seems to be just a standard Eternian Palace Guard. Let's take a look at this new incarnation of Tri-Klops after the break... 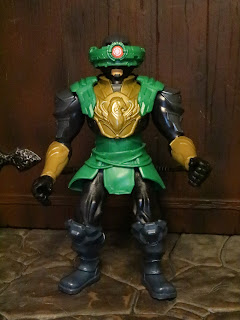 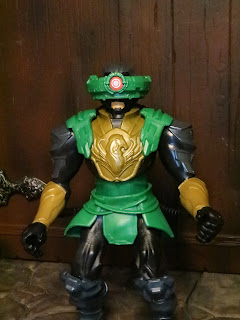 
* Tri-Klops might be wildly different from his classic incarnation but he definitely is recognizable thanks to his one-eyed visor and his green and black color scheme. There's a lot of detail on Tri-Klops and he's one of the most detailed figures in this line to date. Technically Tri-Klops is the green shoulder pads and the green helmet while the rest of the body is a random Palace Guard. The gold armor is cool and quite ornate with matching gold bracers. 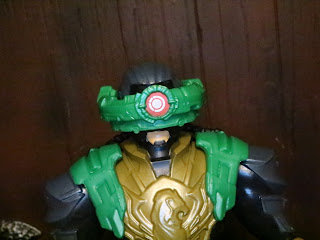 * Tri-Klops takes over his victims by fitting over their heads and using the green claw-like "shoulder-pads" and various wires to control them. The helmet, with its green rounded visor, is instantly recognizable. There's not a lot of detail on the mouth underneath (it's mostly covered) but the visor is nicely sculpted and you can see Tri-Klops' red round eye clearly. It definitely captures your attention. 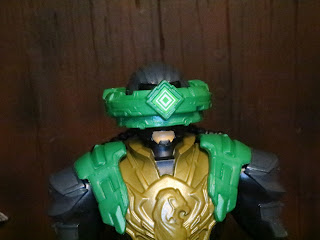 * The visor rotates and has three different eyes on it. The second eye is a green diamond. 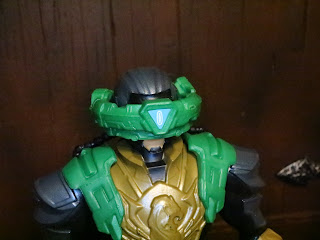 * Last up is a blue triangle shaped eye with an oval pupil. 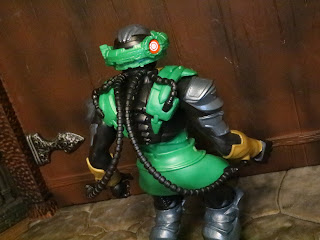 * There are four cables coming out of the bottom of Tri-Klops' visor: Two attach to his shoulders while the two longer cables are flexible and attach down to his bracers. The cables are removable from the bracers so you can move them around a bit and even wrap them around his arms if you want. 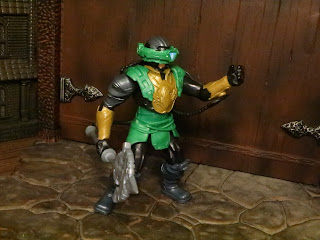 * Articulation wise, Tri-Klops is no different than the rest of the line. He has articulation and is fun to mess around with, particularly because of the "Power Attack" mid-torso, though most things are a bit limited. Still, these are durable figures that are clearly designed with kids in mind so they're built to be durable and tough. 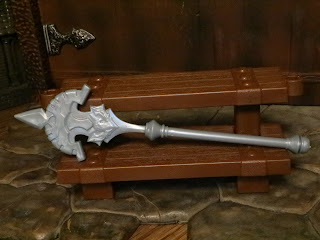 * Tri-Klops comes with an interesting spear-like weapon. I'm assuming this is something that the Palace Guards defending Randor's castle would carry as it looks a bit more ornate than designed for functionality. It's quite cool, though, and does match the design on the armored chest plate. 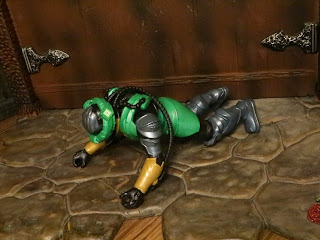 
* For some reason Tri-Klops is hard to keep standing upright. Using his spear to balance him is really key to keeping him upright. Otherwise, he tends to topple over far too easily. 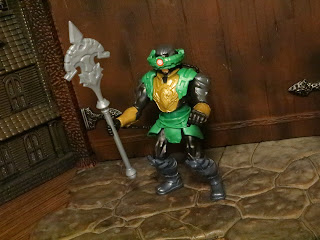 Tri-Klops is pretty interesting and turned out to be quite a cool figure. Honestly, he might be one of my favorite releases from this line to date as I'm giving him a Good and a 1/2 rating. He's fun to mess around with, his visor spins, he's got a cool weapon, and those cables on his back are fun to mess around with. There's not a lot of paintwork on him but he still is fairly colorful and looks pretty unique from the other figures in the line. I was originally hoping that we'd get an oversized Tri-Klops drone figure by itself but this wasn't a bad way to go, either.