Action Figure: Mer-Man from Masterverse/ Masters of the Universe: Revelation by Mattel 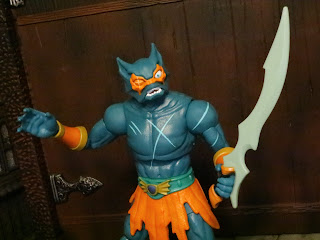 With Masters of the Universe: Revolution coming in the future, it still seems timely for Mattel to continue to release figures based on Revelation. I've been itching to watch Revelation again now that I've had some more time to process it (I like it quite a bit even if it wasn't necessarily the story I would have told), and perhaps some of that desire is driven by getting some new action figures. Mer-Man is part of the most recently released series, though he has been available from some retailers since early Spring. My case of Masterverse figures arrived near the end of June, though, and I'm slowly making my way through them. Mer-Man is branded under the Masters of the Universe: Revelation banner and is based on Mer-Man's "modern" look in the story (after the death of He-Man and Skeletor). Mer-Man didn't play a major part in MOTU Revelation, he did show Teela, Evil-Lyn, and Man-At-Arms the way to Subternia. I liked the character in the show but it was weird to hear Kevin Conroy voicing Mer-Man. Conroy's voice just isn't how I've ever imagined Mer-Man voice. Still, I like the ragged and weathered Mer-Man we've got here. Let's take a look at Mer-Man after the break... 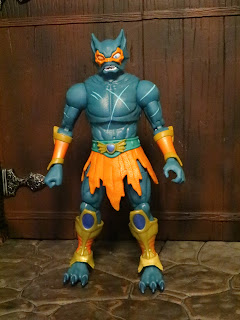 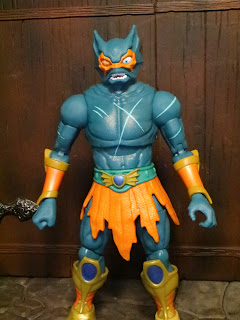 * Mer-Man is certainly recognizable, and definitely looks like Mer-Man, but his outfit is changed up a bit. The most noticeable detail is that he isn't wearing his traditional armor. Instead, he's running around bare-chested to show off his manly scars and fishy physique. His torso definitely looks different than most others, so that's a cool detail. His belt and trunks are also really cool. I like the ornate belt piece that looks like Mer-Man's classic belt. There's a nice, kind of shiny look to the orange loincloth Mer-Man is sporting. He's also sporting some color coordinated bracers. Like with Beast Man, I've heard speculation that this unarmored and scarred Mer-Man is supposed to evoke memories of a well played with action figure but I've never seen anything official stating that was the intent of the design. 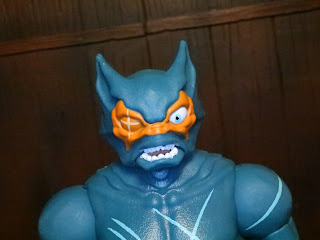 * Mer-Man's look is a blend of his vintage and cross sell art design and the result is a pretty strong portrait for Squidish Rex. Mer-Man's even missing his right eye! There's a story there, for sure. The mouth doesn't move although the lower jaw does seem to be a separate (though not removable) piece. 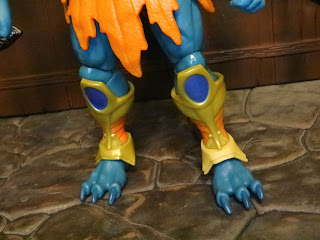 * Mer-Man's at least protecting his shins and knees with some elaborate armor on his lower legs. They're quite regal, benefitting his status as the warlord of the oceans of Eternia, and they nicely match the colors of the rest of his outfit. Well, what little there is of it, at least. 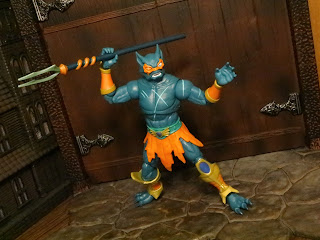 *  Mer-Man's articulation  doesn't hold any surprises and is in line with most other figures in this series. It feels very modern with double jointed knees and elbows and most everything has a good range of motion to it. It's not as smooth as most of Hasbro's modern offerings but it rivals most everything else out there in this scale and price point. It's also very durable and could definitely handle being played with by the younger crowd. 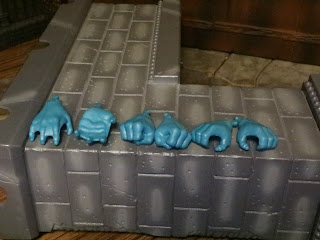 * Mer-Man comes with six interchangeable hands! There's a pair of cupped swimming hands, a pair of fists, and a pair of standard grips for holding his weapons. 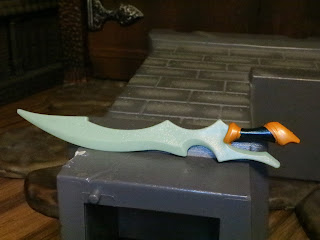 * Rather than his classic "corn on the cob" sword, the Revelation Mer-Man comes with a cutlass styled sword with lots of curves and a handguard. It's a cool weapon that definitely plays to Mer-Man's depiction as a pirate-king of Eternia's seas. 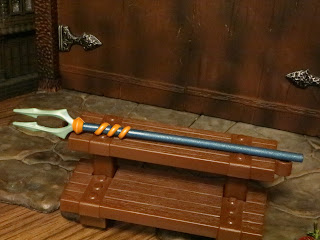 * Next up is a long bident that looks pretty lethal. Why not a trident? Who knows? Since the bident is associated with Hades in Greek mythology (as opposed to Poseidon's trident), perhaps this is a reference to Mer-Man's fallen state? Or perhaps Mattel or the designers of Revelation just wanted something cool and sharp for Mer-Man to fight with. 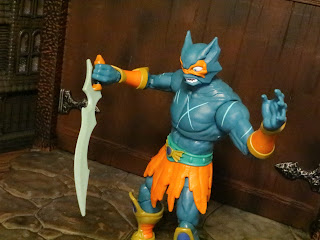 The Negatives:
* Both of the wrists on my Mer-Man are a bit loose and sometimes you put a weapon in his hand they tend to rotate, flipping the weapon over. It'd be a simple fix but it's still a weird issue right out of the box. 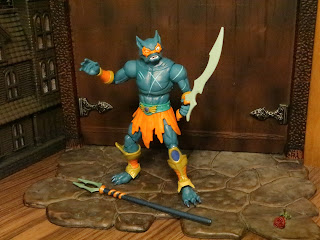 I really like this Mer-Man figure. While he doesn't have armor, he does look quite unique and the scars and missing eye make for a very different Mer-Man figure. His weapons are quite cool, too, especially that swashbuckling sword. It's weird that his wrist pegs are a bit loose but a dab of glue or something else to build up the joint easily fixes that. I'm really enjoying Masterverse and I'm glad Mattel is still building up the MOTU: Revelation roster. It's still no Masters of the Universe Classics but the figures are well made and I'm enjoying the variety and seeing new takes on classic characters. Mer-Man is a Great figure.


I've reviewed so many figures of Mer-Man that he has his own review archive. Check out the Sea of Rakash for a deluge of Mer-Man reviews!