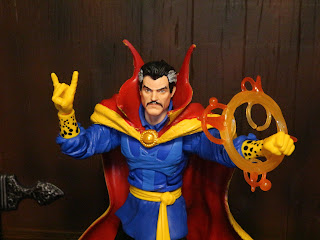 I've probably mentioned it a few times before but other than characters/ figures I just find cool and classic X-Men, the focus of my Marvel Legends collection is comic book versions of characters from the Marvel Cinematic Universe. Hasbro has definitely been doing a great job with the live action MCU figures and while I definitely pick some up here and there, I prefer the comic versions. Usually in the most classic outfit I can get for the character, too. For quite some time my default Doctor Strange has been the 2015 Marvel Now! Doctor Strange, so I've anxiously been waiting for a classic update. I'm pretty sure the last classic Strange was released by Toy Biz, so it's been a minute. The version I'm reviewing today is a Walmart exclusive that went up for preorder in October and, from what I'm hearing, it's supposedly only going to be an online exclusive. It was delivered to me at the end of last week and I'm really excited to add this guy to my shelf. When he went up for preorder for $26.49 a lot of folks were surprised at the price hike. It's still high but the set does come with multiple portraits. Is he enough to qualify as a deluxe figure? I'm not sure, but he's better than most other recent releases. Let's take a look at Doctor Strange, the Master of the Mystic Arts and Sorcerer Supreme, after the break... 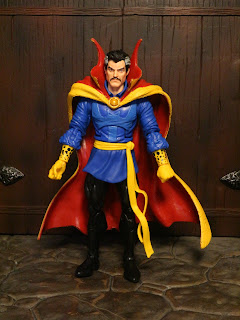 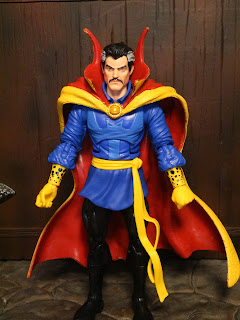 The Positives:
* Doctor Strange is rocking some bright and bold primary colors and he looks great. This is a very classic 1970s/ 1980s looking Doctor Strange which is definitely my preference. He seems to have lots of new parts including a tunic with the details sculpted on, some puffy sleeves with funky yellow and black speckled gloves, and, of course, the Cloak of Levitation held in place with the Eye of Agamotto. It's not removable but it's perfectly in position and looks really dramatic. 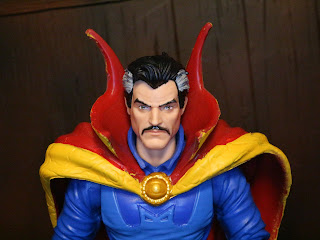 * Doctor Strange has three portraits you can swap out to give him some different looks. The first portrait is the default Doctor Strange and it's the one I'll probably end up using 99% of the time. It's excellent. Here's Stephen Vincent Strange looking suave, sophisticated, and in charge. I love his ridiculously perfect hair and those roguish eyebrows. 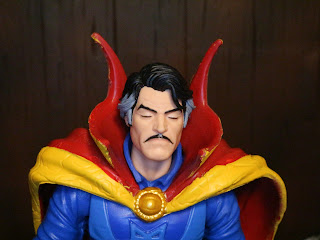 * Next up is a meditating head for Doctor Strange. He's focusing here, perhaps even using his abilities to astral project. It's a cool idea for an alternate head and it looks pretty neat when you pose him like this. The hair is also a bit different, sort of longer and shaggier, or maybe just not combed to perfection like usual. 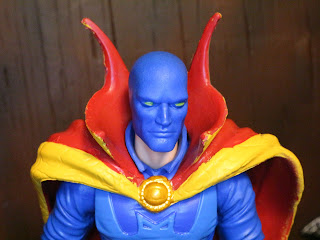 * Doctor Strange's third head is an oddity: A masked portrait from the time that Asmodeus stole Doctor Strange's identity. Strange ended up wearing a mask to travel into the regular world to defeat Asmodeus and then ended up keeping his mask for awhile to prevent further identity theft. This is a fairly obscure alternate look for Strange (I didn't remember it when I first saw it) but it's a neat extra. 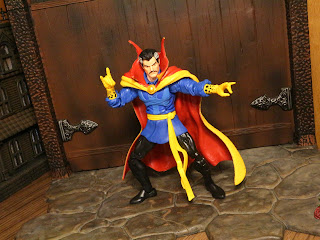 * The articulation is good here. Doctor Strange has pretty standard Marvel Legends articulation, so that means things are solid, movable, and he's lots of fun to play around with. His hips are restricted a bit by the bottom of his tunic but it's not too bad. 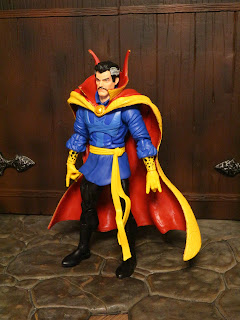 * I mentioned earlier that the Cloak of Levitation isn't removable. That might be a bummer for some but I'll admit that I like how it looks on the figure. It's also balanced nicely and you can still stand Stephen up quite well without him toppling backwards. A lot of the weight of the cape seems to be around his shoulders. It's a nice sculpt, too, with a very dramatic collar. 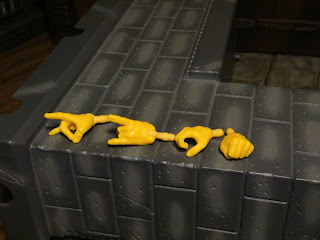 * Doctor Strange comes with 2 pairs of hands: two that are in his traditional posed hands (the "I love you"/ ILY sign in sign language), a right hand grip, and a left hand fist. They swap out easily and give a few nice options though I would gladly have taken a couple more different hand gestures. 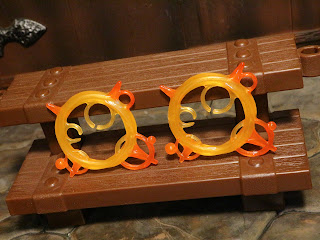 * Hasbro has been using these magic swirly effects since 2015 but they're still kind of neat, especially with the mixture of orange and red. They fit best if you remove Strange's hand and peg it on with the smaller hole around the peg. I used them in a few pictures and like how they look. 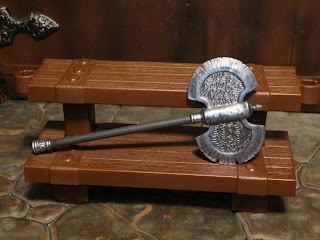 * At first I was surprised to see Doctor Strange come with this giant axe. It seemed like something that maybe he used when he wore his mask. It turns out that this is the Axe of Angarruumus, a powerful weapon Doctor Strange found on the moon in the crypt of a witch. Weird, right? It's a cool looking piece and a neat item to have just kind of sitting around as a relic or artifact in a display. Or if you want Doctor Strange to do some melee combat he can definitely use this to let loose. 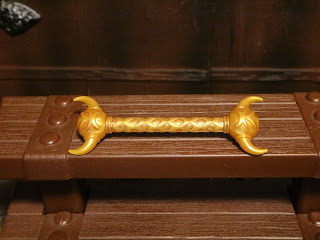 * Next up is the Wand of Watoomb, another significant artifact in Strange's collection. It's a cool looking wand with a bit of a drybrush effect and two rotating demon heads on the ends. The Wand of Watoomb has been part of Marvel since 1965 and has shown up in Conan lore and in the MCU (Wong uses it in the film Doctor Strange). 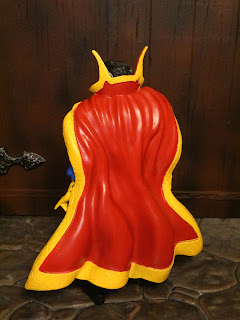 * Strange's cape looks cool but there's a lot of paint slop between the red and yellow. It's not terrible but it is noticeable. It also seems like the edges of the cape could have used a bit more detail. 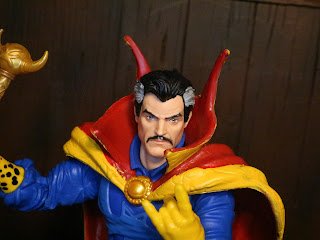 * The collar looks awesome but the paint slop is very noticeable on the edges of it. 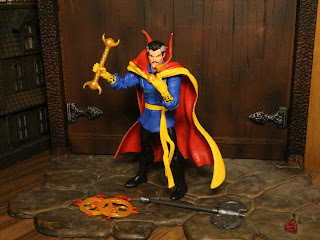 Doctor Strange did cost a few bucks more than your standard Marvel Legends figure but he does come with three portraits and quite a bit of extras. He's one of my favorite Legends figures in recent memory, even with the paint slop on his cape. He's a Great and a 1/2 figure who is just a few paint details shy of perfection. The alternate heads are really fun, though, and I wouldn't mind seeing more figures with all of these extras in lieu of a build-a-figure part. This is an excellent Doctor Strange figure who is ready to take his place as  the Sorcerer Supreme of your Marvel Legends collection.