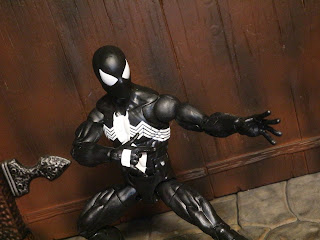 Let's check out the last of the three figures from the newest series of Spider-Man Marvel Legends Retro Collection figures I picked up a month or so back: Symbiote Spider-Man! Spider-Man's black symbiote suit is one of the most iconic "alternate" looks for a comic book character and a popular go to variant for Spider-Man action figures. Hasbro has released this look plenty of times but this version is on a fantastically articulated body and is part of the retro Collection line, so it has the spiffy keen retro card based on the 1990s Spider-Man: The Animated Series toyline. Interestingly, it seems that the fan response at the time Spider-Man found this costume in 1984 during the eighth issue of Secret Wars (it appeared a bit earlier in the Amazing Spider-Man #252) was pretty negatives. Fans hated it! The symbiote storyline was created to give a reason for Spidey to get rid of the costume but by that point fans loved the look. Crazy, huh? How long until you think Tom Holland's Peter Parker gets a symbiote suit in the MCU? Let's take a look at another version of Spider-Man after the break... 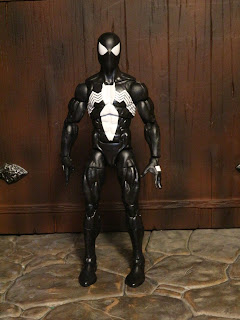 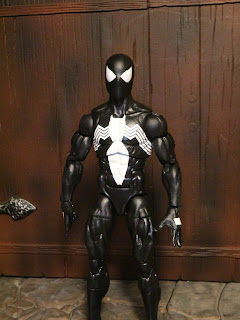 The Positives:
* Spidey's Symbiote Suit look is pretty simple: Black suit with white eyes, white details on the gloves, and a white spider logo. Hasbro nailed the look, though, and used a great thin, muscular body that looks perfect for Spider-Man. There's not a lot of detail or even paint but that's not really Hasbro's fault is it? Peter Parker is back in black, baby. 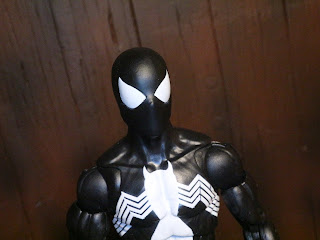 * The is smooth, flat, and has those big white eyes. Simple? Yup. Accurate? Yes, indeed. There's actually a cut out of the neck piece to help give the barbell joint in the neck a better range of motion, too. That was a nice touch. 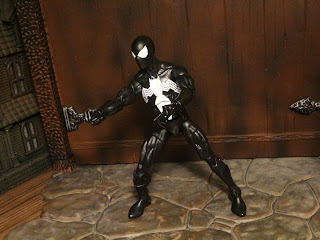 * This version of Spider-Man is one of the most well articulated Marvel Legends figures out there. Besides all of the standard joints he also has the lateral pectoral hinges, or butterfly joints. They have a great range of motion and make this guy even more fun to play around with and pose. 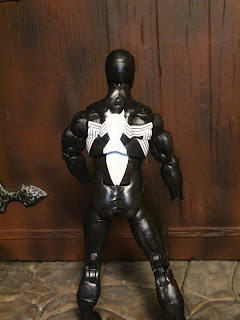 * The large white spider logo on the back is really neat and clean, too. Some times light colors look really bad when painted over darker plastic colors but Symbiote Spider-Man's white paint applications look bright and eye catching all around. 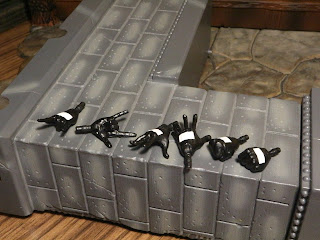 * Most of the Retro Collection figures come packed a little light on the accessories but this version of Spidey does have three pairs of hands: Some web shooter poses, some open hands with splayed fingers, and some fists for good old fashioned cleaning clocks of the baddies. They swap out easily and really do make a big difference in coming up with cool poses for the figure. 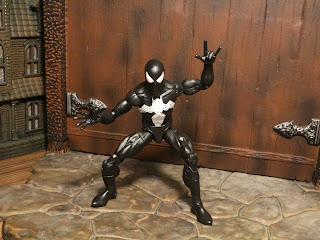 This is a pretty solid Spider-Man figure and he looks fantastic in his black and white outfit. The Marvel Legends Retro Collection figures do tend to be a bit light on the extras, so with new, higher price it makes a cool but basic figure like Spidey here feel a bit less exciting than he otherwise might. He's a Good and a 1/2 figure with great articulation, alternate hands, and an accurate appearance, but some extras like a web tendril or an alternate portrait would have been very welcome. This guy seems to be the hit of this series (most of the figures in this set seem pretty popular) so it seems most fans are pretty happy with him.
It turns out the only other Spider-Man/ Peter Parker figure I've reviewed is the Diamond Select Zombie Spider-Man as a guest review at MWCtoys.com.
For more Marvel Legends Retro Collection reviews check out the following:
Hobgoblin
Shocker
Posted by Barbecue17 at 3/05/2022