Action Figure Review: Trap Jaw and Cycle from He-Man and the Masters of the Universe by Mattel 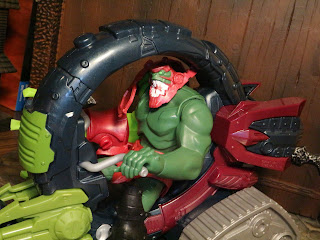 I've reviewed some really cool He-Man and the Masters of the Universe figures from the new Netflix cartoon over the past week or two like Man-E-Faces, Sorceress, and Battle Cat, but today I'm looking at one that's less than impressive: Trap Jaw and cycle. Where to start? Mattel has already made a few of these figure and vehicle/ motorcycle sets for the He-Man and the Masters of the Universe line and they're clearly targeted at younger kids. The figures are repaints (I reviewed the standard Trap Jaw last year) and they're simpler repaints with some so-so vehicles. A green Trap Jaw is a fine variant thanks to the character's classic minicomic appearance but this guy is lacking some paint apps and comes with the generically named cycle. Mattel honestly couldn't come up with a name for this vehicle? Just cycle? Seriously, that's so lazy! In the grand tradition of MOTU vehicles we have the Spitbull, Land Shark, Wind Raider, Terroclaw, Dragon Walker, Bashasaurus, Bashin' Beetle, Terrordactyl, War Whale, and....Cycle? Oh my gosh. There's some really cool stuff in this line but there's also some laziness. Let's take a look at a good example of both after the break... 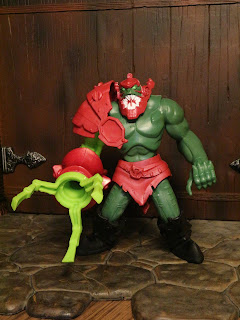 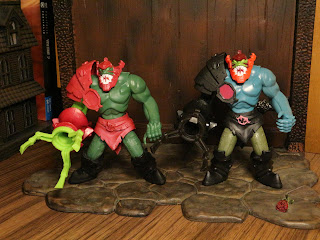 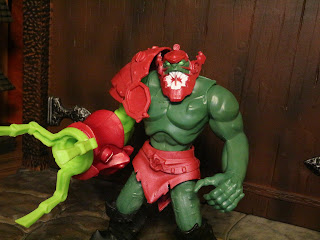 The Positives:
* Like the standard release Trap Jaw, this version looks pretty intimidating. He's all green which doesn't look as good as the blue version did, but at least it's different. His armor and loin cloth match his helmet here. The bright, vivid colors look good and there is some nice detail in the sculpt even though the overall figure is very heavily stylized. 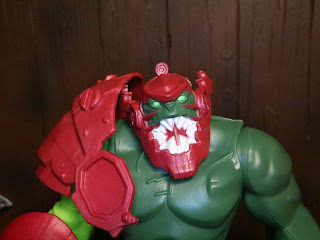 * Trap Jaw has a crazy mouth, right? When Kronis transforms into Trap Jaw in the show his teeth get seriously crazy. Seriously. 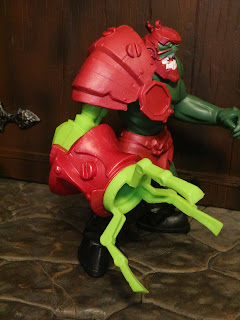 * Trap Jaw's robotic arm is enormous with a massive claw on the end. The claw does come separate in the package so you'll have to pop it on. It's a one time assembly thing, though, so it isn't removable after you've popped it on. I do miss the multiple weapons of pretty much every other Trap Jaw ever made but the arm has some nice detail like massive screws and rivets keeping it together. The neon green color for the arm and claw is kind of cool, too. Reminds me of something from the 200x era. 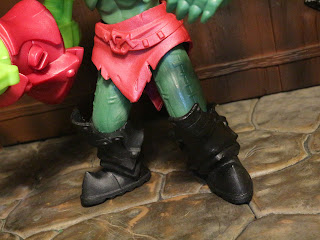 * Trap Jaw is still rocking some medieval boots. Pretty cool stuff, Trap Jaw.
* OK, so let's turn the attention from Trap Jaw to Cycle. Or is it just cycle? Who knows? I will say that I kind of like the design here. It reminds me a bit of the Rimfire from Spiral Zone or the G.I. Joe Buzz Boar with the rounded cockpit. There's a solid vehicle design here and a color scheme that matches Trap Jaw's classic color scheme, too. The treads don't actually roll here. Instead, there's a wheel underneath the body. 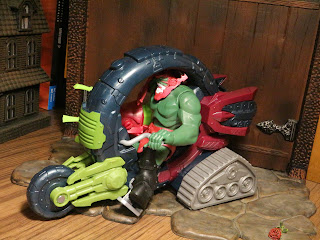 * Trap Jaw does fit nicely inside. The handlebars are hinged so you can more easily get any figure to use the vehicle. he looks pretty cool inside. 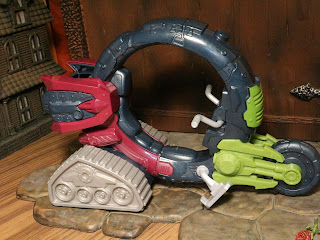 * There's some cool detail here and I like the concept of this vehicle. It definitely needs something else, like a weapon of some sort, and maybe some kind of animal theming, but overall it's probably the most interesting of the vehicles released in this line so far. 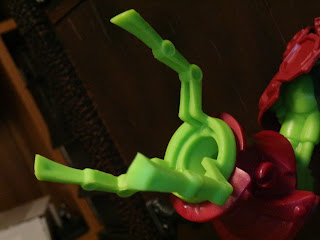 The Negatives:
* OK, so first of all Trap Jaw doesn't have a swappable hand. That's OK, I guess, but Mattel didn't even include the energy burst from the standard figure, so you've just got a big hole here. There's even a hole in the back of Trap Jaw's elbow, too, which drives me crazy. 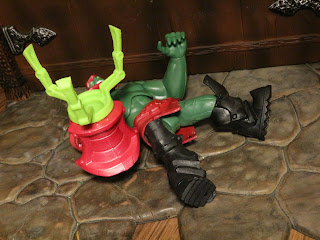 * I've had a problem with loose hips on a few figures in this line and the problem strikes again, here. Trap Jaw can barely stand up. That should be the simplest thing in the world but he wants to do the splits and then tip over too often. 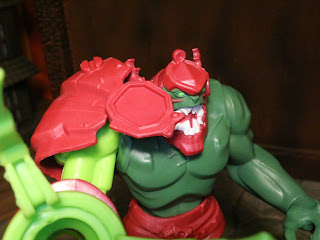 * Like on the standard figure Trap Jaw's massive pauldron gets in the way of his articulation a bit. It's a larger, soft overlay and when you lift and lower the robotic arm the pauldron tends to catch on his head. That's a design flaw, I think. 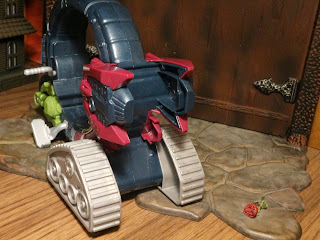 * The vehicle looks cool from most angles but the back just has these weird, hollow spots. Stuff like this just looks cheap and unfinished. I know Mattel is probably trying to keep these at a lower price point to target kids and parents but, c'mon, try a little harder. 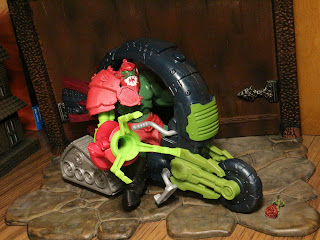 This set gets an Eh and a 1/2 from me. At $20 bucks you'd definitely be getting an OK deal for a figure and a vehicle but Trap Jaw is pretty flawed (weak paint apps, no energy burst, can't stand up) and the blandly named "cycle" could definitely have been better. Honestly, the cycle could have been much cooler with a theme and some weapons/ gimmicks. I like it, but it's a bit too generic for Masters of the Universe. I want craziness, darn it! This set is probably best skipped unless you're a Trap Jaw devotee or really dig the vehicle. It seems like all the good vehicles designers are working on Masters of the Universe Origins, as that line has some fantastic vehicles.