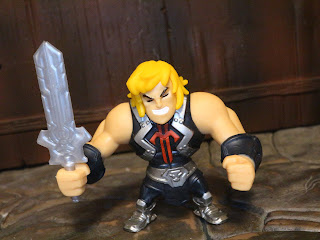 Mattel has really been supporting the Netflix CGI animated He-Man and the Masters of the Universe at retail by offering figures of the cast in multiple different scales. We've got the standard 5 1/2 inch figures, the 8 1/2 inch figures, the upcoming 7 inch Masterverse figures, and the 2 1/8th inch Eternia Minis. I've already reviewed the He-Man and Battle Cat set from this line but I just received my shipment of the single packed figures from Big Bad Toy Store earlier this week so it's time to give them a look over. Ready for a look at an Eternia Minis He-Man in his outfit from the new cartoon? Then join me after the break... 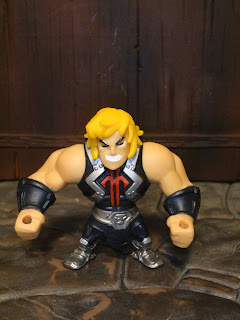 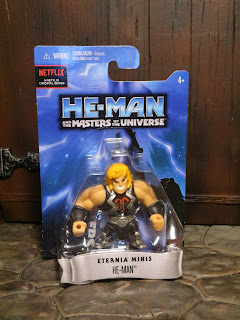 The Packaging:
* Since I hadn't reviewed any of the singled packed Eternia Minis from this show yet I figured I'd snap a picture of the packaging. It's kind of cool with a lot of blue on it. It stands out from the standard and Revelation themed Eternia Minis on the shelf, so that's a plus. 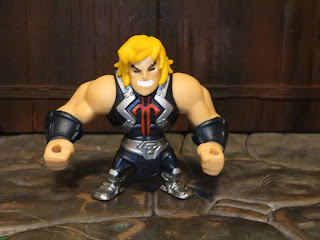 The Positives:
* He-Man looks really cool in this outfit. Rather than looking like a shrunk down version of the animation model this version of He-Man nicely matches the style of the previous Eternia Minis figures, so he should fit in to your existing collection nicely. I love the design of this outfit and it looks really cool here, especially the red Sword of Grayskull on his chest and the cool Grayskull skull belt buckle. 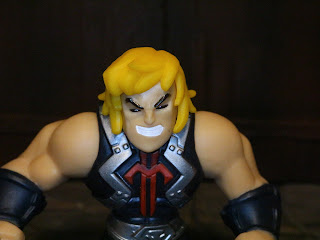 * While the hair is a bit shaggier and the face looks a bit more angular, this doesn't really look all that different from the earlier Eternia Minis He-Man. I actually prefer this headsculpt to the previous ones. 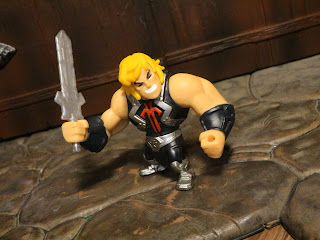 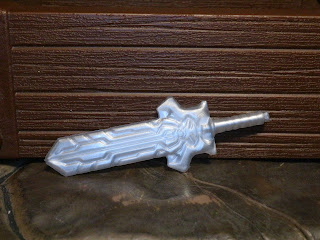 * He-Man comes toting the Power Sword from the Netflix series as well which is big and bulky, kind of like the 200x Power Sword. I really like the design of this one and it fits great in either of He-Man's He-hands. 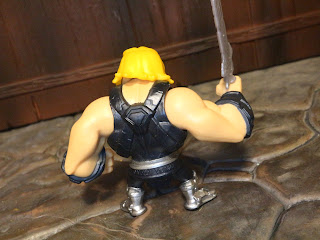 The Negatives:
* One of Mattel's premiere cost cutting measures is to not paint the rear of the figure, which is what we've got here. He-Mans harness just fades to black at the back. Annoying, right? 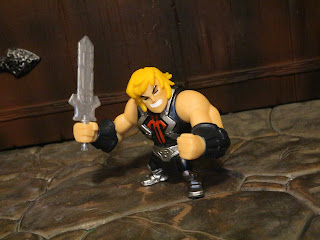 This is a Good and a 1/2 little He-Man figure. He's fun, he has a cool outfit, and I like the portrait of this one better than the previous Eternia Minis He-Man figures. He could definitely use a bit more paint detail, though, and I really do miss the plastic cases that the 2020 releases in Eternia Minis had. They just added some more value and a cooler way to display the toys. There are two other figures in the series so far, Skeletor and Sorceress/ Teela, and I'll b reviewing them sometime in the next week or two.