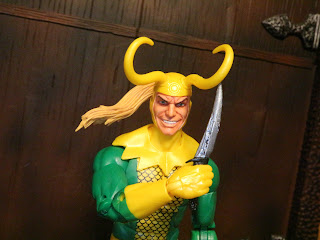 Ready for some mischief? Then let's take a few minutes talking about Loki! Part of the Marvel Legends Retro Collection and packaged on a classic Toy Biz styled card based on the 1990 Marvel Superheroes line, Loki is a repaint of the 2019 comic based figure from the Avengers: Endgame series of figures. I have that Loki but I decided to upgrade to this one. It was kind of a spur of the moment decision when I found discounted because of damage to the card. Was it worth it? We'll get there. I do want to point out that it's interesting that both Loki and Scarlet Witch might be packaged on the 1990 Marvel Superheroes cards but both figures didn't get an action figure from Toy Biz until 1997's Avengers toyline. Interesting, huh? OK, now we can jump in and check out this Retro Collection repaint after the break... 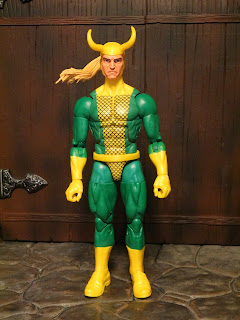 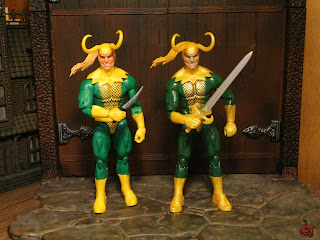 Comparison:
* The Retro Collection Loki is on the left while the Avengers: Endgame/ Smart Hulk Loki is on the right. What's different? Besides the second portrait the Retro Collection comes with, it's the paintwork and the weapon selection. The Retro Coillection has a lighter, more classically colored green and yellow outfit while the previous release has a darker green outfit with metallic yellow highlights and a gold chest. 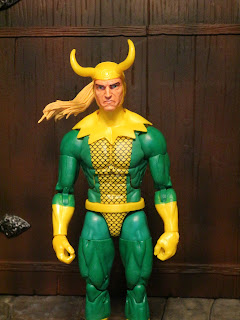 The Positives:
* This guy does look better than the previous comic styled Loki figure. I tend to think of Loki as being more gangling or at least thinner, but the classic 1960s and 1970s looks tend to make him pretty muscular and physically intimidating. Not quite how Tom Hiddleston portrays the character, you might say. The colors look good which is really crucial since most of the character's costume is simply painted on. The armored design across his torso is also simply painted on but it's neat and clean. he does have a belt (it's a separate piece but non-removable)and a removable collar. He looks weird without the collar, though. 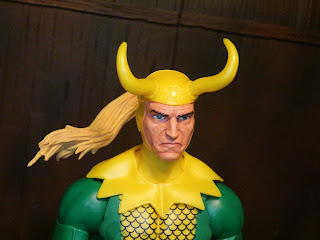 * This portrait of an angry Loki is new to this set. Loki has shorter horns on his helmet here and a long, flowing ponytail. His face looks really stern and intimidating. Seriously, he looks pretty pissed about something. It's a good sculpt an the paintwork is excellent on it. 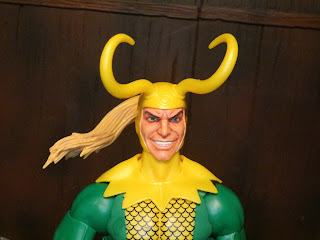 * This portrait with longer horns and a mischievous grin is reused from the previous figure but the new paintjob makes it look worlds better. It's incredible to think just how much some figures have improved since 2019. 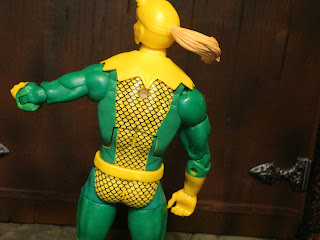 * Here's a shot of the elaborate paint print on the back as well. Yeah, it's just a paint mask or a stamp or something but it looks really good, especially considering it's black and yellow, which sometimes get messy. 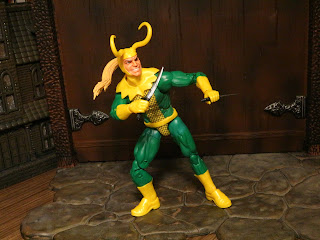 * Loki's using an older body but everything works just fine. He's a fun character to pose in multiple ways, especially swapping the portraits and using the daggers. He's solid and sturdy, so no worries here. 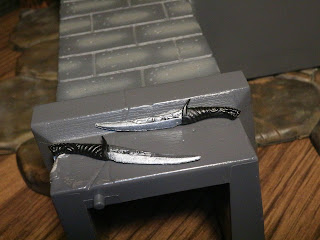 * Loki comes with two daggers this time around. They're quite cool though they are reused from Drax the Destroyer. I think they look fine with Loki but they're definitely a fairly character specific accessory to Drax, right? 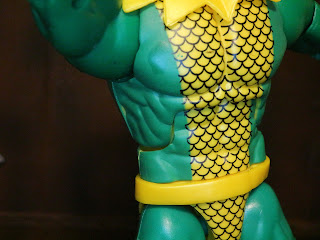 The Negatives:
* I didn't even notice the weird little paint smudge on Loki's chest until looking at the picture, so it must not be very noticeable in hand. What is weird is that Loki's front and rear torsos don't align perfectly. The rear torso it a bit larger. I actually checked my 2019 Loki and he has the same issue. Weird. I've never noticed this on any other Legends figure other than Loki. it definitely feels weird in your hands, though. 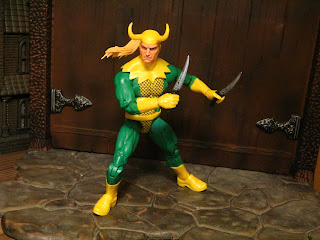