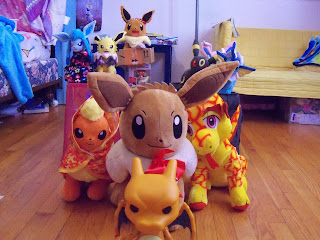 Here's a guest post from my assistant, Adora, AKA Umbreon 13! She's going to be recording some adventures with her Eevee/ Pokemon collection here.

Adora : I was going for a royal look where the queen is up at the top and all her servants are in front of her. At the very bottom you can see the giant Charizard Pop!. I wanted him down their along with Flareon and my stuffed dragon, Lava. I didn't want Charizard in between Flareon and Lava because it would be hard to get my huge Eevee in there but they were still connected.

The second thing I want to talk about is the Eevees closer to the queen Eevee.  On the right there is Umbreon, Vaporeon , Sylveon and Leafeon who you can barely see cause she's small.  On the left there is Glaceon and Jolteon.

And last but not least there is Evoli / the queen Eevee.  Evoli is French for Eevee. I call her that because she can say "eva" in French and English and apparently she's rare.  If you look closely you can see a Pigeotto POP! underneat so she can be tall, and above that is a the bottom part of a cardboard bed I made that accidentally got separated from the rest of the bed.    ~ Adora