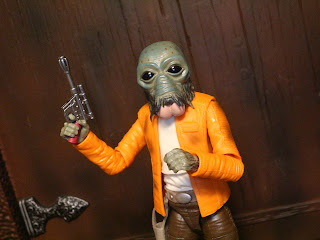 There are Star Wars characters that we love because they're amazing characters and then Star Wars characters we love because they're so odd and memorable. Ponda Baba is one of those characters whose onscreen appearance is brief but extremely memorable and I've always loved the guy. He represents the world of danger that Luke Skywalker is stepping into, a world where simply walking up to the bat at Chalmun's Cantina for a drink can quickly escalate into a life or death encounter. Ponda Baba, AKA Walrusman, is a figure I've been eagerly anticipating in the Black Series for years but now that I have him in hand I'm kind of disappointed. It's no secret that Hasbro has been raising prices on their figures over the past 6 months or so with more price hikes to follow and while some of their figures continue to improve in quality, others have really been dropping lately. Ponda Baba, it turns out, is mostly a reused Luke Skywalker (Yavin Ceremony) with a new head and hands. That's kind of weird, right? Listen, I understand that reuse is pretty significant in a number of toylines (I mean, Masters of the Universe is my favorite property and that line is built on reuse) but for a line like Star Wars: The Black Series, it needs to make sense. I'm OK with something like an Imperial Officer maybe sharing a body with another officer or an EU character with some creative parts mixing, but Ponda Baba just looks off. Let's take a look after the break and hopefully you'll see what I mean.... 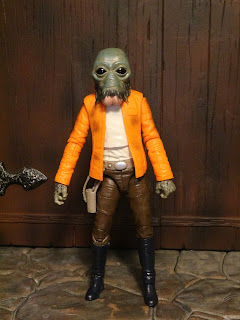 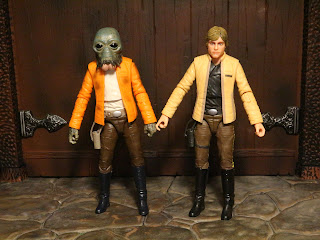 Comparison:
* Ponda Baba is on the left while Luke Skywalker (Yavin Ceremony) is on the right. What's reused? Everything other than the hands and head. This kind of looks like Luke cosplaying Ponda Baba. The overall look is OK but the proportions are off, bringing everything down. 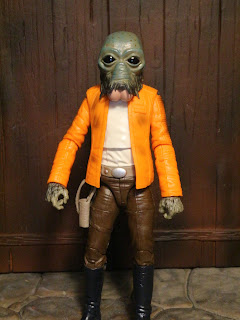 The Positives:
* Let's start with the positives. Overall, the colors are really nice and accurate on the figure. While I'm used to seeing Ponda Baba with tan pants thanks to the Power of the Force 2 figure, the dark brown pants do seem to be more accurate. It's tough to find a lot of good information on Ponda Baba's full body costume. The jacket's colors are nice and while Ponda Baba's jacket does differ from Luke's (it's the pocket) the styles are very similar. Hasbro even gave Ponda Baba's jacket some dark brush strokes to add some shading and make it look a little grungier. 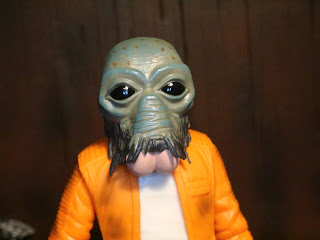 * The headsculpt is good. Very good, actually. It's the best Ponda Baba action figure I can think of. This is a great portrait of the Aqualish bully and the detail on his facial hairs and the top of his head is pretty impressive. I love his mouth, too. the weird tusk like protrusions are just so unusual and they look fantastic here. 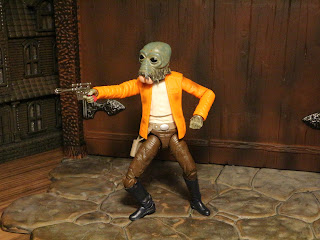 * The articulation model is a bit older but it still checks out and works quite well. Solid, durable, and capable of taking most poses you'd want from this guy. 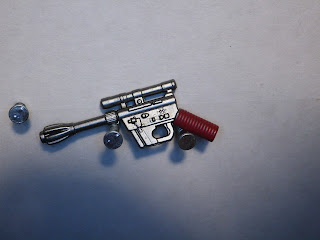 * I've always liked Ponda Baba's blaster which seems to be a modified DL-21. This is an incredible sculpt with really nice paint work and the figure looks excellent with it. 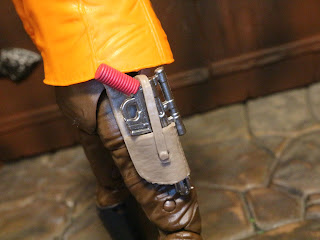 * The holster works just fine and keeps Ponda Baba's DL-21 at the ready. Hasbro did neglect to paint the strap around Ponda Baba's leg, however. It's left over from Luke's holster. I guess they figured we wouldn't notice? 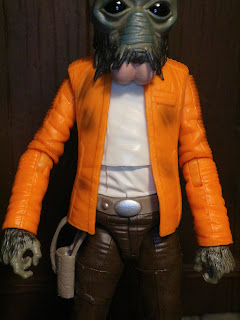 The Negatives:
* Ponda Baba's jacket is wrong. The pocket is incorrect and shirt doesn't seem to seam, unlike Luke's. If Hasbro was intent on reusing this mold for some reason they at least should have created a new jacket shell for the figure. Of course, Ponda Baba is definitely not really suited for this body. He's not a massive dude or anything but he's definitely bigger than Luke. Noticeabley so. 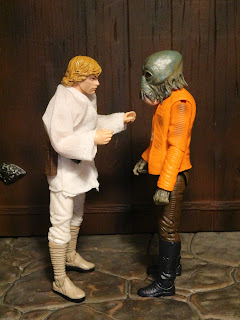 * Ponda Baba should be taller, too. Not crazy tall but still he should be a bit taller than Luke. From the side, I think his head looks oversized. The head is correct; again, it's the body that's just too small for Ponda Baba. This is one of those instances of reuse, like the recent Black Krrsantan, that is juts lazy and doesn't work. 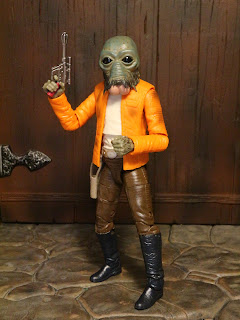 Ponda Baba has easily been in my 10 most wanted Black Series figures for a long, long time and it pains me that he's so disappointing. He reuses a sculpt that's too small and slender for the character which just ruins a fantastic portrait. His blaster is great, his portrait is great, his hands are good, but using the inaccurate Luke Skywalker body just kills things. This guy could have been incredible. He really should have come with a removable arm and a glass, as well. That would have been amazing! Sadly, we get the bare minimum effort. Eh. That's how I feel about this guy. He gets an Eh. I'm really hoping that the Black Series team gets things back on track and stops taking shortcuts and using repaints where they're not needed and hurts the figures. I'm really bummed about this one. Last year there were some impressive figures but 2022 is not off to a great start.

Are you a Ponda Baba/ Walrusman groupie? If so then check out my review of the Power of the Force 2 Ponda Baba and the Funko POP! Greedo/ Hammerhead/ Walrus Man 3-pack.