Action Figure Review: Ram Ma'am from He-Man and the Masters of the Universe by Mattel 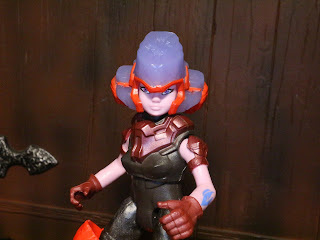 I'm really excited to check out Ram Ma'am from the Netflix animated series He-Man and the Masters of the Universe today as she might be my favorite character on the show so far. Remember that in this iteration of MOTU the heroes (and villains) can transform, so Ram Ma'am is the powered up version of Krass, a young woman who is part of the Tiger Tribe and best friends with Adam. In this series, Krass/ Ram Ma'am borrows elements of both the classic version of Teela and Ram Man to craft a new character. So.. for classification purposes should I lump Ram Ma'am with Ram Man? They both do have the first same name. Krass was also the name given to Ram Man in the Masters of the Universe Classics bios. When I rang her up at the Walmart I found her at her name also popped up in the system as Ram Man. Weird, huh? Should I classify her along with Ram Man as different versions of the same character or is she unique enough to warrant standing on her own? Since I placed Anti-Eternia He-Man in my He-Man/ Prince Adam archives, I think I'll do the same with her and Ram Man. You know, unless we learn that her deceased father was called Ram Man or something. Then who knows what I'll do. Let's just jump in and check out this pretty cool figure after the break... 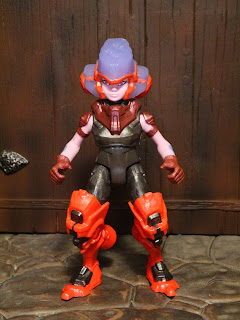 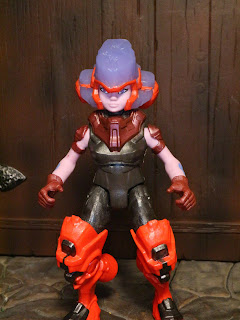 The Positives:
* This line is clearly designed and marketed towards kids so what we're getting is definitely different than the average collector targeted line. That being said, I really do like the look of Krass/ Ram Ma'am. I actually kind of prefer her standard look in the show more with her Star Wars/ fantasy-esque pilot look, but this does look quite a bit like the character model from the show once Krass is powered up. She's wearing a dark body suit with massive rocket boots, a massive helmet, and some armored shoulder pads and a neck brace. You gotta pad up when you're gimmick is hitting things with your head, y'know? 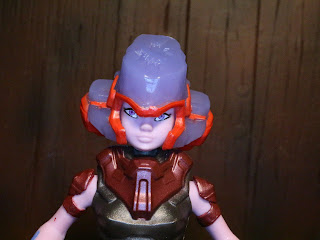 * The helmet is pretty accurate to Ram Ma'am's from the show as it looks like it's made out of some sort of crystal with little dents in it. The face sculpt is good, too, and while the only paint apps on it are her eyes they're neat and clean. 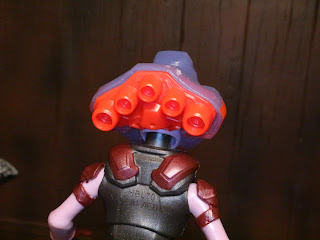 * Flip Krass around and you can see that she has five rocket thrusters on the back of her head. Yes, five. She's taking ramming things to a whole new level. 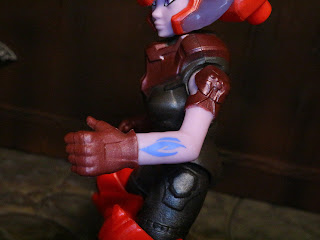 * I dig the tattoo on her left arm. It's a simple little paint detail but it's cool that it's there as it adds a bit more personality to the figure. 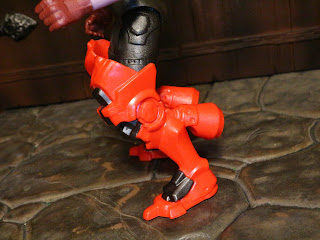 * OK, rocket boots. Ram Ma'am has got them and we'ra all very, very jealous. They're armored, they're massive, and they have jets on the back. I want a pair for myself. 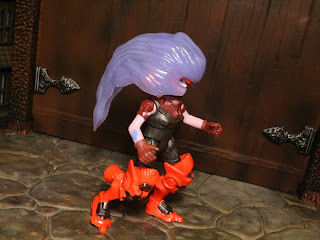 * To help show off her powers Ram Ma'am comes with an energy effect that snaps over her helmet to try and depict her in the middle of bashing into someone with her helmet. You can also use the "Power Attack" spring action mid-torso joint to have her slam into an enemy or "launch" the energy effect, though it doesn't fly very far. 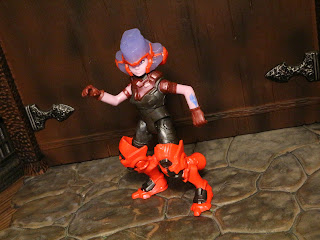 * The articulation is really simple here but I'm OK with it. Her hips move well, the Power Attack feature is fun and her head has a fairly decent balljoint to give her poses a bit of personality. 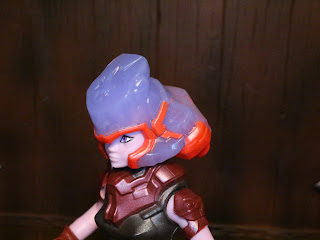 The Negatives:
* Ram Ma'am's crystal is supposed to be bright pink but here it's more of a bluish-purple. Do you think Mattel toned down the pink thinking boys wouldn't want a pink helmeted human battering ram? 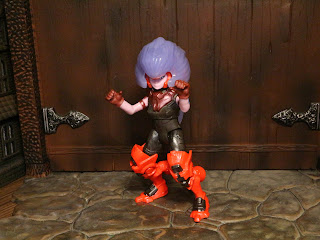 Ram Ma'am is definitely on of my favorite figures in this line to date. She's up there with Man-E-Faces and Battle Cat. She's fun, colorful, and just a bit over the top. I've only watched the first episode of season 2 so far but I imagine I'll watch a few more before the weekend is out. This is a cool toy and I'm glad to finally have Ram Ma'am she she completes the core team from the show. There seem to be quite a few figures up for preorder that we haven't seen revealed yet so hopefully this means that the line is doing well and that Mattel has long term plans for it. Personally, I would regular versions of Duncan, Teela, Cringer, and Krass along with the villains like Keldor, Evelyn, Kronis, and R'Qazz. Think it'll happen?

For more He-Man and the Masters of the Universe reviews check out the following: