Minifigure Review: Skeletor and Painthor from He-Man and the Masters of the Universe Eternia Minis by Mattel 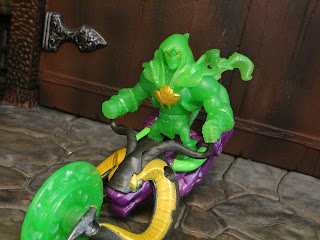 So... I think I've made a mistake on my review of the 5.5 inch Skeletor with motorcycle. The front of the packaging is multilingual and it has the set titled as Skeletor with Painthor/Panthor, so naturally I assumed that the motorcycle was called Panthor and that "Painthor" was Panthor's name in another language. After picking up this set which only has the names in English, however, I'm convinced that the motorcycle is actually called Painthor. That's actually...kind of cool. It's definitely a Panthor inspired motorcycle but Painthor does sound like a good Masters of the Universe vehicle name. There's an animal theme and some sort of pun in there, so I dig it. Today I'm looking at the He-Man and the Masters of the Universe Eternia Minis set of Skeletor (in bright green) and Painthor. It's a neat little set so let's check it out after the break... 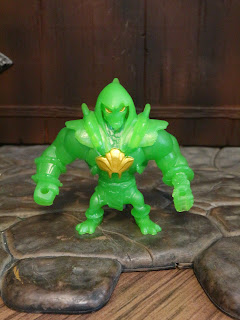 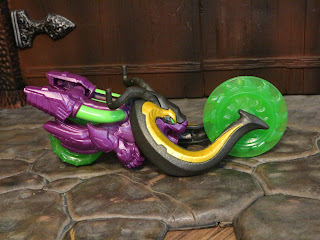 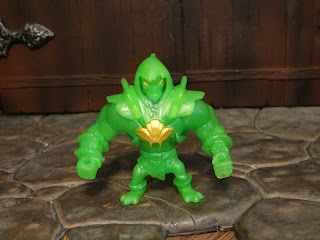 The Positives:
* I'm still waiting on my standard, single packed Skeletor from this series but I'm assuming that he'll be the same sculpt as this guy. The bright green looks awesome, though. Seriously, the show uses lots of cool, vivid colors like this and green is how Skeletor's powers are visualized, so this figure makes a lot of sense. How long until you think Mattel releases this guy in the 5.5 inch line? 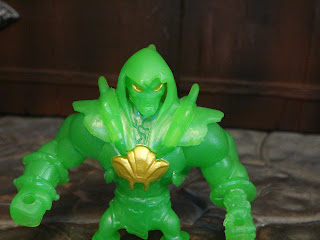 * The heasculpt is pretty cool and rather creepy looking. I like the gold eyes. Very spooky. The hood doesn't move but Skeletor's skull is on a balljoint and can move underneath the hood. 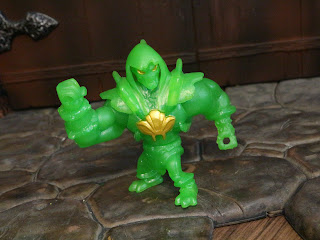 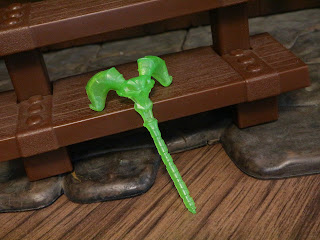 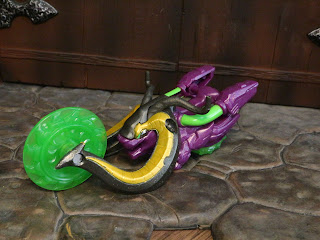 * Here's Painthor. I have to say that this version of Painthor is actually way cooler than the 5.5 inch version. I think it's because of the wicked green wheels and the giant horns coming out of Panthor's helmet that hold the front wheel in place. This bike is way more metal than the previous version for sure. 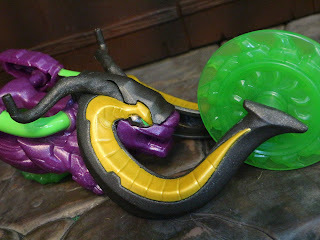 * Here's a better look at Painthor's cat headed front. His helmet's horns turn into the fork for the front wheel and the handlebars. 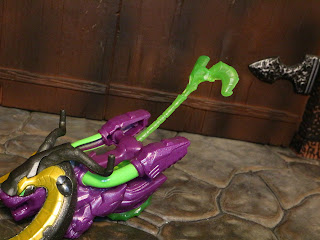 * Want to have Skeletor show off his Havoc Staff? It actually plugs into the back of Painthor similar to the larger sized set. 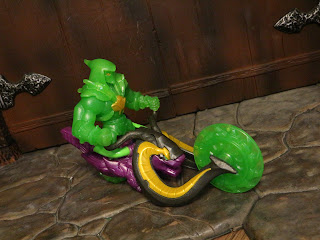 * Skeletor sits on Painthor quite nicely. You really gotta work his feet in there but he stays on securely and his hands fit right over the handlebars. 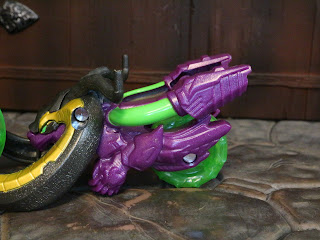 * The sides of the bike are really nice. I love the metallic purple and green color scheme. Perfection! 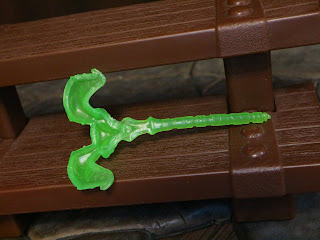 The Negatives:
* Why does Mattel keep giving us Havoc staffs that are hollow in the back with stuff based on the Netfliz He-Man and the Masters of the Universe show? Why they gotta dork us like this? 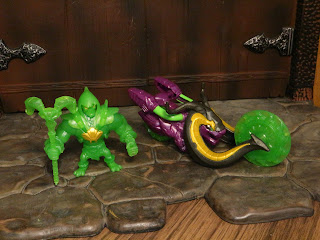 I actually like this set with Skeletor and Painthor a little more than the He-Man and Battle Cat set. Painthor is a pretty cool vehicle and the Skeletor variant here is definitely pretty eye-catching. For $10 bucks its a fun little set and it gets a Great rating from me. While I'm really hoping Mattel gets back to focusing on the classic characters they haven't made in Eternia Minis again this is still a fun, unusual little set. It also confirms that this bike is Painthor and not Panthor. Nice.
If you're looking for more of Painthor check out the 5 1/2 inch Skeletor and Painthor from the He-Man and the Masters of the Universe line.

For more He-Man and the Masters of the Universe Eternia Minis check out the following:
He-Man and Battle Cat
Posted by Barbecue17 at 3/21/2022