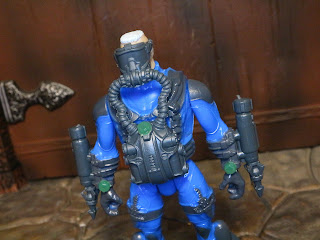 Another Final Faction figure? You better believe it, baby! Today I'm checking out Riptide, the underwater specialist of Alpha Team 1. I found Riptide the same time as I found Amari (about two weeks ago) but I'm just getting around to reviewing him. Sometimes underwater specialists are weird toys because they're use can be pretty limited. Take Hydron from He-Man/ New Adventures; how useful is a diver in space? I mean, I know there are surely planets covered in water out there but this guy probably has to just chill out and wait, right? Considering the majority of Earth is covered in water, I guess Riptide probably does get a lot of use in the team. He's a pretty cool figure that honestly feels more deluxe than a lot of 1/18th scale offerings from other companies charging higher prices. ready to check out this canned tuna loving diver who just so happens to be exclusive to Dollar Tree and Family Dollar? Then join me after the break... 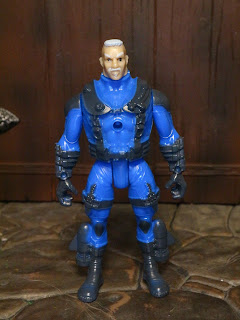 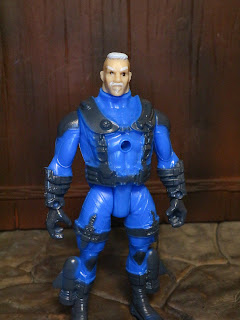 The Positives:
*  As a basic figure with no gear on Riptide doesn't look terribly out of place operating on land. He's got standard boots and not too much extraneous gear permanently attached. Well, other than the propulsion jets on his legs. The sculpt is pretty good and I love the blue and dark grey color scheme on this guy. There are even lines in the diving suit and lots of detail on his gloves, shoulder pads, and harness. 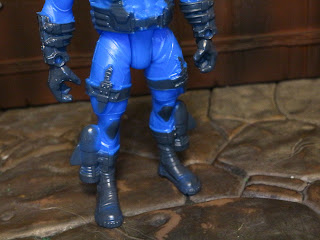 * Riptide's legs are covered with cool detail. His boots are pretty sweet looking and he has the aforementioned propulsion jets on his calves which probably help him move through the water better than standard swimming. He's also got two non-removable diving knives on his thighs. So usually I hate sculpted weapons that aren't removable but for a 1/18th scaled figure who costs $1.25 I'm going to give it a pass and applaud the cool detail. 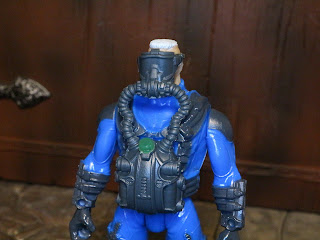 * To really outfit Riptide for some underwater action you need to put on his SCUBA gear. It's one solid piece and the mask fits over Riptide's head while the front part plugs into his chest. It looks pretty good. There's no paintwork on it but there is some excellent sculpting and it fits on him really well. 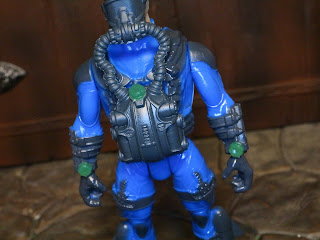 * See those little green gems on Riptide's gauntlets and his SCUBA tank? Those are what the back of the package refers to as water activated sensors. They're supposed to help him track Kharn activity in the ocean. The three pieces are removable but be careful: They're tiny! 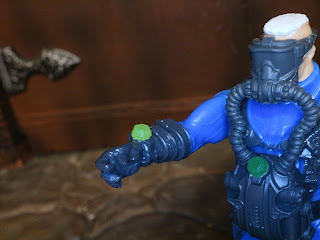 * Furthermore, the sensors actually change color. Place them in warm/ hot water and they change from a bluish-green to a lighter yellow-green. Kind of neat! 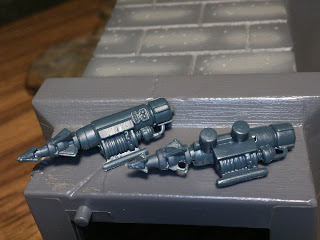 * Let's talk about Riptide's harpoon launchers. These things are wicked cool. You can even see the cord on the reel for them if Riptide wants to use them to catch something. 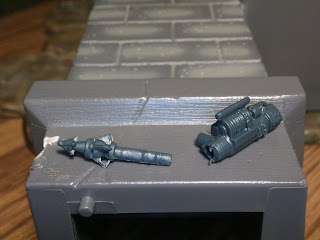 * The harpoons are removable, too! How neat! There's even a spot on the harpoon where you could add a string or cord of your own. 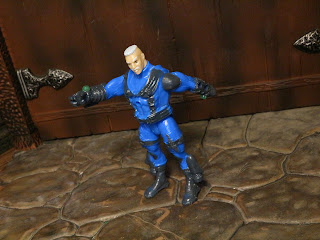 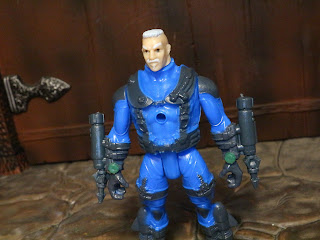 * Those harpoon mentioned above? They plug perfectly into the gauntlets on Riptide's wrists. Now he's ready to shoot some super spiky missiles at the Kharn! 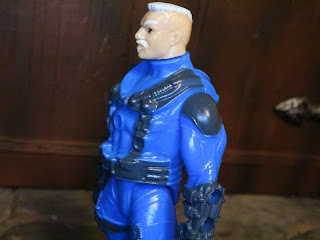 * The paintjob isn't bad looking at Riptide from the front but from the side you can see that the painted belts and such don't cover all of the sculpted detail. 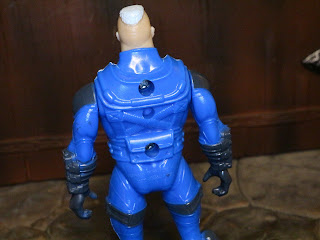 * There's no paint on the back of his torso, either, meaning all of the belts and straps back there are the same color as his suit. 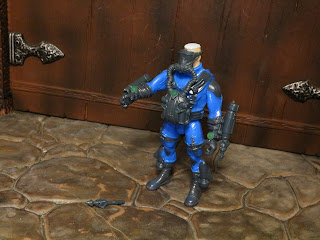 Riptide is pretty flipping incredible. I mean, for $1.25 you're getting a really, really fun action figure. Yeah, there are clearly shortcuts being taken here in terms of paint but the sculpt is impressive and the accessories are excellent. Riptide even has a color changing play feature with his functioning sensors. Amazing! For the price, this guy is just plain fun and went from being a figure I was a bit apprehensive (sometimes diver figures are cool and sometimes they're boring) to being one of my favorites in the entire line. I'm actually giving him an Epic. There's lots of stuff still out there for this line I haven't picked up yet and I'm looking forward to finding them!