Action Figure Review: Sorceress from Masters of the Universe Origins by Mattel 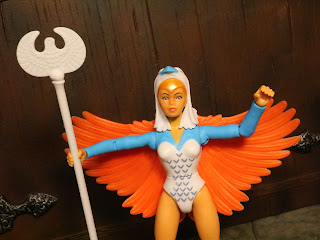 Today I'm checking out the third figure from series of Mattel's Masters of the Universe Origins line and it's a figure I've been looking forward to for quite some time: Sorceress! Mattel released the Temple of Darkness variant of the Sorceress with Castle Grayskull last year but this version is her standard, classic look. The vintage Sorceress figure was released in 1987, the last year the vintage line appeared on store shelves in the united States, and she was only one of four Heroic Warriors released that year. She's a fairly difficult figure to come by and rather pricey. That's probably due to a mixture of her rarity, her popularity, and her being a tough figure to find in good shape due to her action feature and the paint applications on her outfit. This is a great way to get a vintage looking Sorceress at a fraction of the price. Yeah, I still want to pick up a vintage Sorceress for my collection but probably not anytime soon. Let's take a look at this retro styled version of the Sorceress after the break... 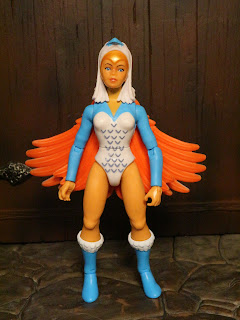 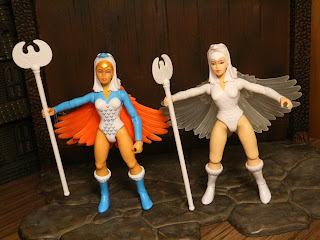 Comparison:
* The classic styled Origins Sorceress is on the left while the Temple of Darkness Sorceress from Castle Grayskull is on the right. What's the difference? Mostly just the paint though the new Sorceress also has the improved knee joints. Interestingly, her skin tone is a bit darker, too. Much more tanned than the fair skinned Temple of Darkness. 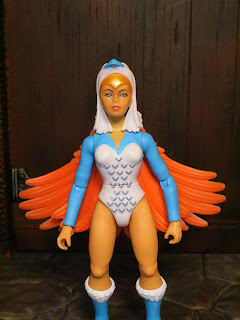 The Positives:
* I like this sculpt and how Mattel translated the vintage look into the Origins line. The colors are bright and vibrant and the feathers on her outfit aren't just painted on but are also sculpted details. She's quite nice looking and definitely pops off of the shelf in the best way. 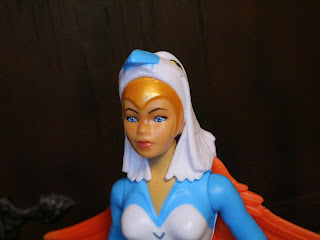 *  The headsculpt is really good too, with great work on the eyes. Yeah, it's intentionally vintage looking, but the features are good and Mattel did a nice job on the Sorceress' hood. 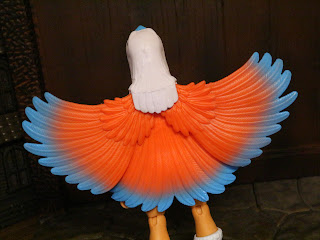 * The wings look fantastic on this figure with a nice red to blue color gradient. Even better is that they can rotate out so she can have them posed behind her or spread for more dramatic poses. They're definitely an improvement over the wings of the MOTUC Sorceress and most other Sorceress figures I can think of. The feathers on her wings are quite detailed and look excellent. 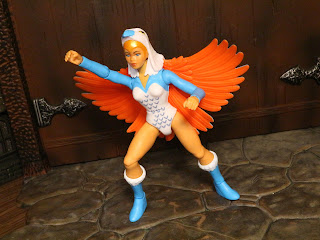 *  The MOTU Origins figures are built like the vintage toys but with modern articulation. Imagine what you would get if you mixed a vintage figure with a MOTUC figure. They're quite fun to play with and they feel very sturdy.
* They're also modular and can be easily separated to make your own lazy boy customs! 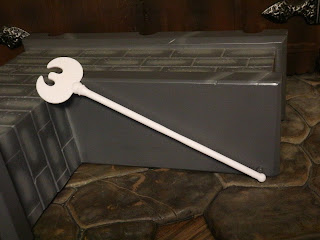 * The Sorceress comes with her classic white staff. It kind of looks like the staff Indiana Jones uses to find the location of the Well of Souls, doesn't it? It seems a bit ancient Egyptian inspired (a design detail the 200x/ MYP version of the Sorceress took and ran with) and adds a lot of character to the figure. It's quite regal and mysterious. 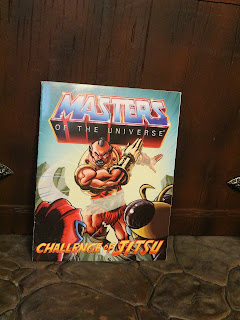 *  Each figure in the series also comes with a mini comic. Yes, an actual minicomic. Everybody in series 7 gets the same comic but it's a cool way to familiarize kids picking up these figures with the characters. This is a simple story where Stratos and Buzz-Off go after Jitsu. The Sorceress appears in it, too. Nothing too special but cool art and just the fact that it's included is a big perk. 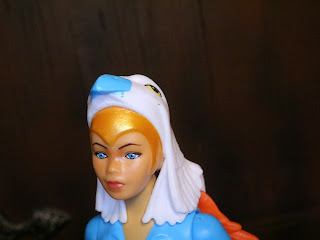 The Negatives:
* This version of the Sorceress really looks like she got some sun. There even seems to be some tanning/ burning on the bridge of her nose. It's weird that her skin doesn't match the previous Origins figure released, isn't it? There are also some stray paint marks on the cowl of her hood, most noticeable the blue from the beak. 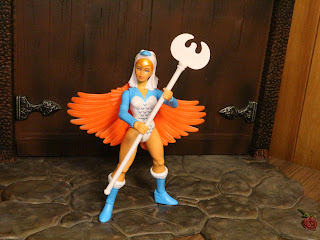 The Sorceress is another very welcome release in Masters of the Universe Origins and another Great release. I'm thrilled to have the classic version of Teela Na in this scale and style as she'll look fantastic with the rest of the Origins figures or as a stand in for the vintage Sorceress figure. The wings are really nice on this figure and I love the colors of her outfit. She's fantastic! At this point we have two of the four 1986 Heroic Warriors (Clamp Champ is the other) and recent rumors indicate Randor is on his way. Could we soon see Gwildor to complete the 1986 heroes? I'm down for it.