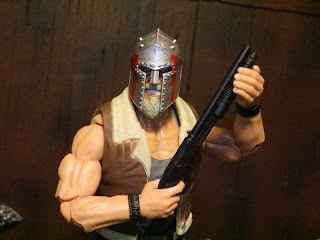 Last week I reviewed one of the first Valaverse Action Force figures I picked up in January, the Bone Collector, and now I'm getting ready to check out the leader of The Garrison. It's Kerak, the ruthless Colonel of New Colonia who runs his troops like a medieval army. Kerak reminds me of someone you'd see in a series like The Walking Dead or in the Fallout games; someone who has just been waiting for the civilized world to end so their ruthlessness and aggression can go unchecked. While Action Force is named after the vintage 1980s Palitoy series, based on Action Man, which brought the G.I. Joe: A Real American Hero characters, it doesn't seem to directly tie in with the vintage line and mythology. It's a new story set in the United States after the fall of the federal government and the rise of states as individual Republics. There is an SAS trooper as a major character, though, and perhaps more elements from the 1980s series will appear in time. For now, though, you could say that this incarnation of Action Force also draws inspiration from earliest Action Force figures that were simply realistic military action figures. These guys are bigger, though, and Kerak is a pretty tough dude who can command your Garrison troops or fit in with Cobra. Let's check out Kerak after the break... 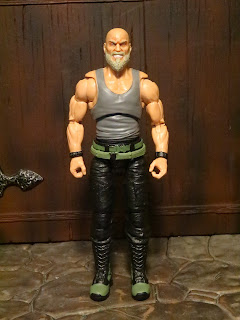 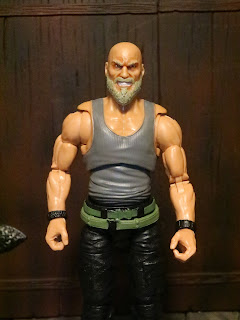 The Positives:
* Kerak has a pretty simple design and is quite realiastic looking. He's wearing black BDU pants, a grey tank top, and a green belt. It's simple but it works for a base figure and it's the extra stuff added on that really gives Kerak his personalization. He's sculpted as a pretty built guy and this figure lets you see all of his muscles. The sculpt and paintwork are really neat and clean and looks excellent. 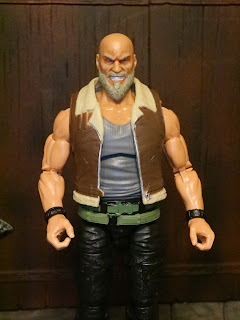 * What probably helps set Kerak apart from other figures is his vest. It's a bit more stylish than a regular vest with a brown outer piece and a fur lined interior. I've seen jackets similar to this so maybe Kerak cut the sleeves off of something like that? 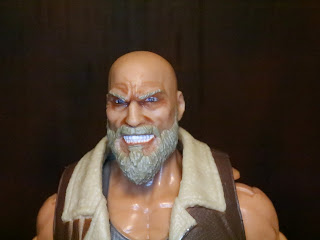 * The headsculpt is excellent with a lot of character. Kerak's intense eyes and wicked grin definitely make him look like the bad guy that's thrilled to pull one over on the heroes. Valaverse has done an excellent job with headsculpts and the painting/ printing on them which is quite a feat, especially considering how new the company is. Kerak might have the best portrait of the series 1 figures. 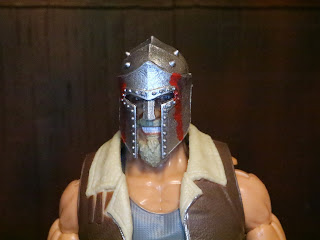 * To further drive home his personality, Kerak actually wears a metal, medieval styled helmet. This looks really cool and fits over his head perfectly. The paint applications on it are fantastic and the red stripes on the sides make it look far more frightening than just a metal helmet would look on its own. 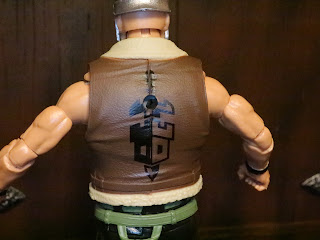 * Flip Kerak around and you can see what I presume is the symbol of The Garrison. It's printed on very neat and cleanly and gives him a bit more uniqueness. 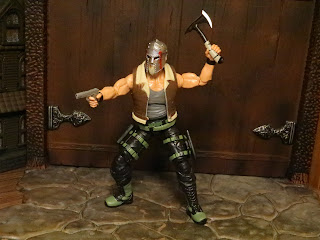 * All of the Action Force figures I've picked up so far are built quite similar to Hasbro figures, particularly the G.I.Joe: Classified Series figures. The number of joints and range of motion is excellent. The joints are rather tight at first, particularly around the knees and elbows, so you'll need to use something like a hairdryer or hot water to loosen them up a bit (my figures came with a flyer detailing how to do this) but it worked well and now they're nice and tight with excellent motion. Kerak has excellent motion, especially in his arms and torso. These are really sturdy, well made figures. 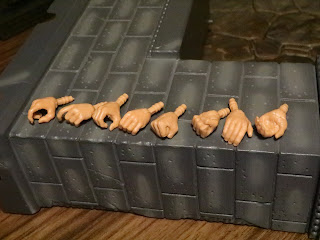 * Kerak comes with eight bare hands that you can swap out. The pegs are really thick and sturdy though I needed to use a little heat the first time or two to get them loosened up. There's a pair of standard grips, a pair of pistol grips, a pair of cradling hands for holding the barrel of a rifle or his shotgun, and a pair of fists. 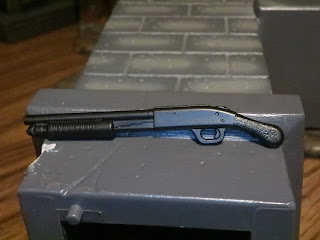 * Kerak comes with four weapons, all of which we did get a sneak peek of in the Prototype Armaments set last year. First up is his primary weapon, a modified pump-action shotgun. It's simple but surely a nasty weapon at close range and Kerak looks great with it. He's a buff enough guy that he can probably handle this thing without too much trouble. The barrel is hollow to hold a firing effect, FYI. 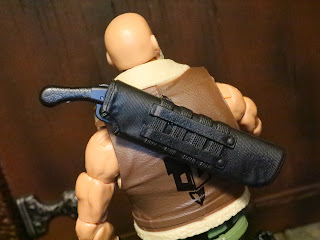 * To tote his shotgun around Kerak includes a back holster. It's fairly rubbery so the shotgun can slide in and out easily and it looks great attached to his back. The holster does have some nice little sculpted attachment points, too, and a texture that makes this look like canvas of some sort. 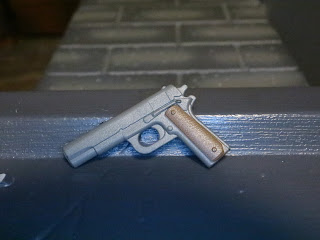 * Kerak's sidearm looks to be a standard Colt 1911. Simple, classic, and rugged, this is a great go to sidearm for someone like Kerak. The painted grip is pretty cool, too, and there's a hollow barrel for a muzzle flash effect. 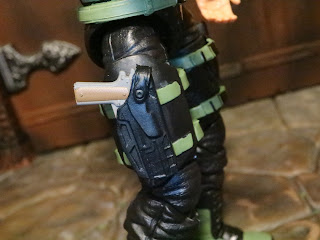 * Kerak keeps his Colt at his right hip with a nice molded holster. The pistol fits in perfectly and stays in place. The straps are painted green to match Kerak's belt and looks tailor made for him. 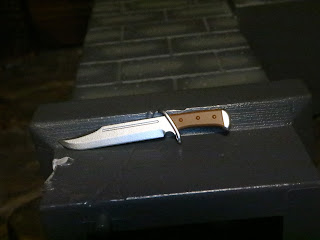 * Kerak's Bowie knife is pretty wicked looking. He's from Texas so I'm assuming he loves the statement that this blade makes. 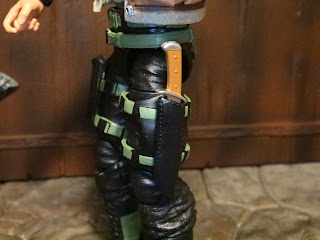 * The leather sheathe on his left hip holds his knife for him. The blade fits in perfectly and the edges even have nicely sculpted stitching and painted green straps. 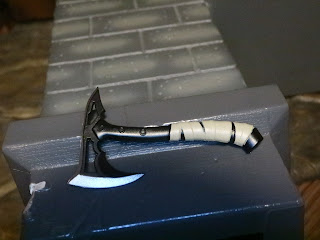 * Last up is this wicked looking axe. This is a very modern and looking hatchet with a silver blade and a paint application on the wrapped handle. You have to wonder how often Kerak uses this in battle. 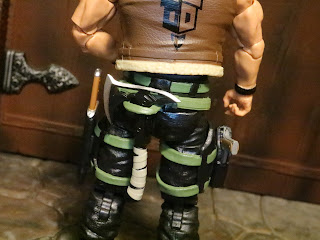 * He has a belt that he comes wearing in the package with a loop on it. It turns out that the loop is perfect for slipping the axe inside. 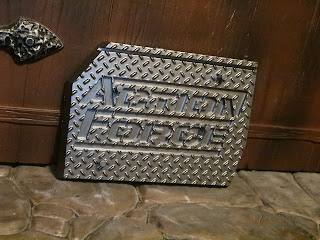 * I'm a huge proponent of action figures coming with display bases and Action Force's might be the best yet. The metal look of the display stand is fantastic and there are four pegs on the base, making it extra versatile. See that little slit at the back? If you want to cut out the file card from Kerak you can even display it behind him slid in there. I really hope Valaverse starts offering these for sale by themselves as I'd love to use them for a few other lines. 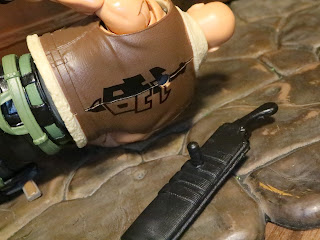 * The peg on the shotgun holster might either be too short or just too short to slip through the vest and give a nice hold so it does tend to fall off sometimes. Not all the time but it's looser than I'd like. 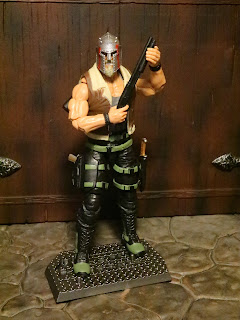 I've had about five of the Action Force figure for nearly a month now and so far I do think Kerak is my favorite (there's one I haven't opened yet). He's a really well done figure with a cool look, excellent articulation, and some really fun and impressive accessories. There is a lot of quality here and I'm excited to see how this line expands. They've been tough to get for some folks. I've purchased about half of mine through Valaverse with the other half preordered through BBTS but it seems that folks are having a hard time tracking these down. Keep your eyes on those retailers and a few others as it's likely these may show up back in stock as shipments arrive. This was a pretty small Kickstarter funded line and no one knew what to expect. It's turned out to be pretty excellent with Kerak being a very Epic figure, so it's natural that folks are going to want these. Just stay patient and keep your eyes open; you shouldn't have to resort to scalper prices for these.

This is the first figure of Kerak I've reviewed. For more Action Force reviews check out the following:
The Bone Collector
Prototype Armaments