Action Figure Review: Battle Cat from He-Man and the Masters of the Universe by Mattel 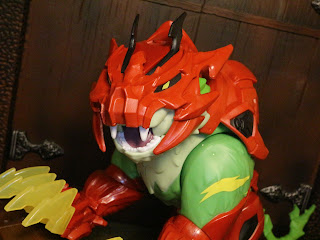 Guess what? I've got quite a few new He-Man and the Masters of the Universe figures to review. I really like the Netflix animated series and while I've been sort of lukewarm on the toyline based on it, some of the newer releases really have me quite excited. Today I'm checking out Battle Cat, a deluxe release (like the figure and vehicle sets) and I have to say that he's probably my favorite toy in this line to date. I love Cringer/ Battle Cat and I'm always excited to see him in toy form. This one has the look of the 200x series (sharp, angular armor) with the brightness of the Netflix CGI He-Man show. I love Battle Cat's backstory and his voice in the new cartoon and I'm excited for more of him in the second season, which premieres on March 3rd. Let's take a look at Battle Cat after the break... 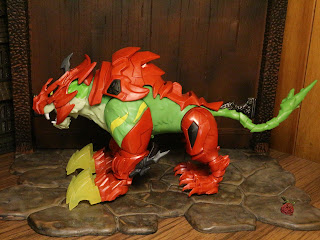 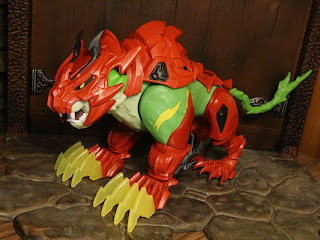 The Positives:
* Battle Cat looks fantastic. He's large, colorful, and decked out in some truly sharp looking armor. It's a great blend of fantasy and tech that not only feels very MOTU but also matches the aesthetic of the new show as well. In the new show, the Power of Grayskull can transform all of the heroes, not just He-Man and Battle Cat, but this is figure definitely depicts Cringer's transformed form. 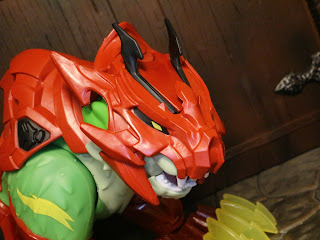 * Battle Cat's helmet is awesome. He gains the glowing eyes during his transformation and they, along with his crazy looking helmet, make him look rather fierce. The helmet is clearly a separate piece but it isn't removable. it looks great and I love the black spikes/ blades on the front. 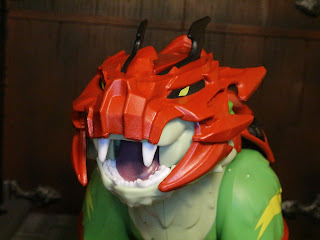 * Battle Cat also has a hinged jaw so you can make him roar. Or talk. Seriously, whatever you want. I love that you can see all of his teeth, too. It's a super fun feature. 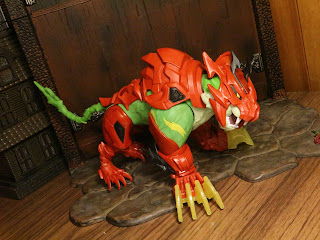 * While Battle Cat isn't what you would call super articulated he does have a nice number of joints  on him that do make him fun to play with. He's much better than anything else I've purchased from the series so far, particularly due to the swivel/hinge joints in his "knees" and the balljointed head.
* Battle Cat also has an awesome Power Attack feature. Both of his balljointed front shoulders can be pulled in any direction and released for a rather substantial claw attack. I love it! 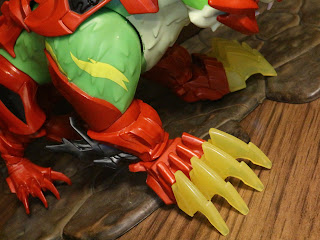 * Part of Cringer's backstory in this series is that his claws were taken by the evil hunter R'qazz (who becomes Beast Man) when he refused to battle in R'Qazz's fighting pits. Duncan builds him some enhanced claws which become even more powerful when Cringer transforms. They're pretty awesome looking with bright yellow claws. 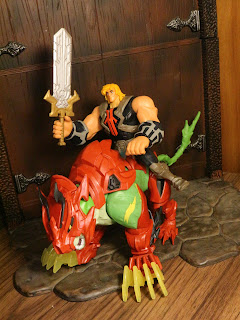 * He-Man fits on Battle Cat's back perfectly. There are actually two slits that the bottom of He-Man's belt/ loin cloth fit in to keep him on very securely. It works great and He-Man looks fantastic riding on Battle Cat. 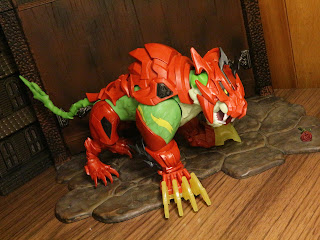 I love this version of Battle Cat. He's a very solid, very durable toy and just a fun version of the character with his own unique style. He's pretty Epic. This is easily the best figure so far in this line and is well worth taking a look at if you're a fan of the show or of Battle Cat. The Power Attack feature is really fun and works great and He-Man can ride Battle Cat like a champ without tumbling off. I'm excited to see how this line develops over the next year. Hopefully He-Man and the Masters of the Universe (2021) is a popular ongoing show and grows into a toyline that really captures the excellent character designs from this show.