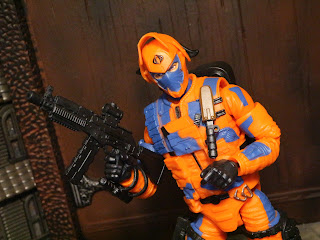 The best action figures of the vintage G.I. Joe line were released between 1988 and 1990. The characters may not be as memorable as those characters from the early to mid 1980s but the figures themselves were amazing with superior sculpts and some of the best accessory kits you could imagine. Ever since I was a kid one of my favorite vintage figures from that era was the Alley Viper, the Cobra urban assault trooper. With a distinctive orange and blue color scheme and lots of gear the Alley Viper definitely stood out as an eye-catching yet intimidating figure. Why orange and blue? Considering the vintage file card stated that the Alley Vipers were Cobra's equivalent to a SWAT unit or the British SAS, I always assumed that these guys were meant to be seen. They hit hard, hit fast, and capture the attention of defending forces while the other Cobra troops do their work in a more subtle manner. The Classified Series Alley Viper is a fantastic update of the vintage figure and he is absolutely loaded with fantastic gear. Let's take a look at this incredibly cool figure after the break... 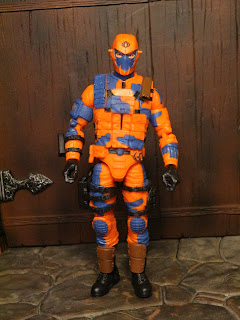 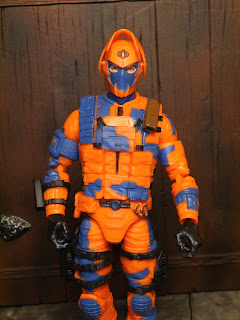 The Positives:
* The Alley Viper is one of the best upgrades of a vintage design yet as he really looks like he's decked out in so much tactical gear and light body armor while also having a fantastic orange and blue camo print. There's so much detail in his gear; plenty of pouches, carabiners, and armored plating. The vest is a separate piece (an overlay) but it's not removable. He's also sporting some various sheathes and holsters that aren't easily removable unless you heat the plastic and remove some body parts, but they look great and keep all of his weapons close at hand. 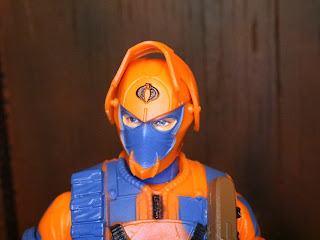 * The portrait is really good. Well, the helmet is, I should say. All you can see of the Alley Viper are his eyes. His face is covered by a blue balaclava with a sleek orange helmet that is shaped like the head of a serpent. See the little fangs around his chin? There's a sculpted Cobra emblem on the forehead, too. 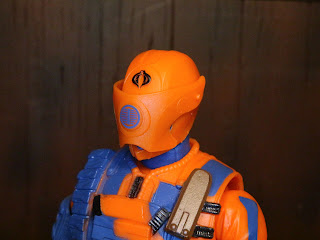 * The visor is a removable piece and is clips onto the helmet. It can raise up, like in the picture above, or slide down as seen to the right. Inside the facemask is a little sculpted element that looks like a screen, so I have to wonder if this is a view screen of sorts or perhaps it's attached to the scope on the Alley Viper's more high-tech rifle? 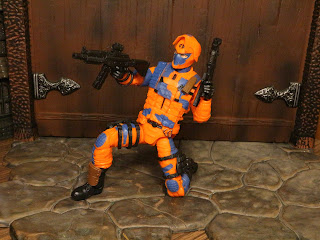 * Like the other figures in this series the Alley Viper's articulation is excellent. These guys are just so well made and have fabulous articulation. The range of motion in the joints is excellent other than the shoulders, which are a bit restricted by the vest. I'll get to that in a moment, though. 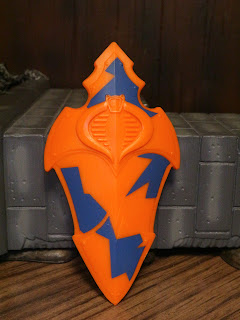 * One of the most memorable accessories of the Alley Viper is this large combat shield. You might initially think of a riot shield but a closer look reveals that the top and bottom of the piece are designed so that they can be used as weapons. You can see the sculpted armor plating and rivets on the front of the shield along with the massive Cobra sigil adorning the front. 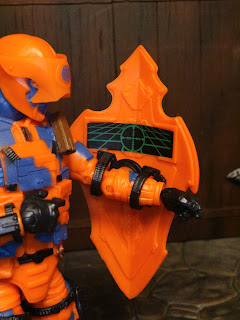 * Flip the shield around and it has two cool features. First, you've got the really neat arm strap that actually rotates. It stays on the Alley Viper's arm very securely and looks great. Second, there's a label that shows a green and black targeting screen. That looks fantastic and provides a handy feature to the Alley Vipers when using the the shield as cover. 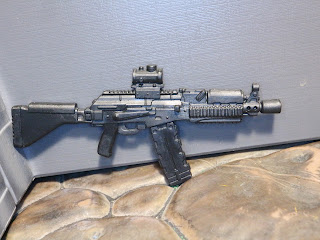 * The Alley Viper comes with two primary rifles, the first of which is a modern AK styled rifle. This is a fantastic weapon and seems to be very modern with excellent detail that fits the Alley Viper's aesthetic perfectly. The barrel is hollow so if you have any effects pieces you can use them in there. 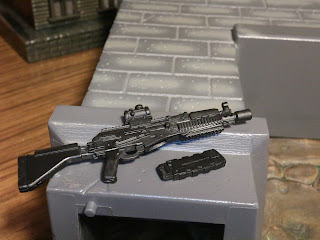 * The magazine is also removable. It clips in tightly so I don't think you're going to lose it. I'm loving the removable magazines in the Classified Series. 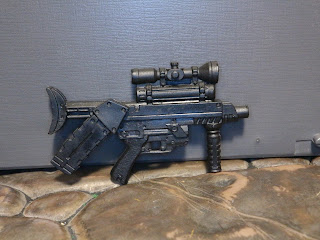 * The second rifle is a slight upgrade of the vintage Alley Viper's weapon. It's a bit more compact with a modified bullpup style to the magazine placement. It also has a forward grip and a large scope on top. What's that sitting between the scope and the top rail of the rifle, though? For years I thought it was a laser sight on the vintage toy but here I wonder if it's a camera system tied into the Alley Viper's visor. 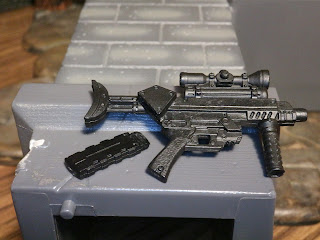 * This rifle also has a detachable magazine. It's the same magazine as the AK styled rifle as well, so they're interchangeable if that matters to you. This magazine also stays in nice and tight. 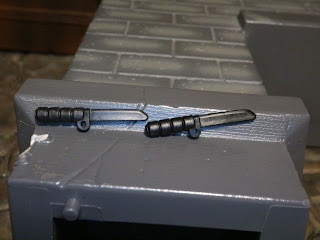 * The Alley Viper includes two knives, both of which are quite small. These are definitely for use  as tools or weapons for very, very close quarters. 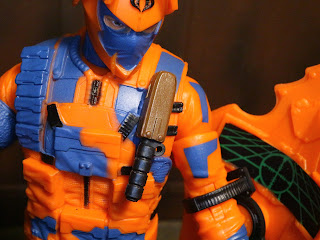 * Just like on the vintage figure they're placed in easily accessible places for the Alley Viper to access. One is hanging down from his left shoulder in a brown leather holster. This looks awesome and the knife stays in there good and tight. 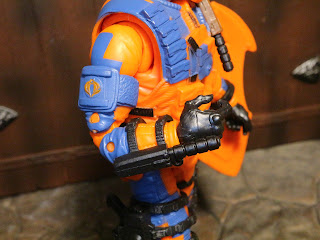 * He also has a sheathe attached to his right forearm. That was always such a cool detail on the vintage figure and it's really neat to see it replicated here as well. If you heated up the hand and popped it off you could take this sheathe off, too. 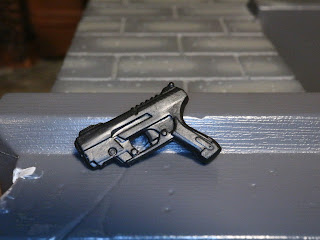 *  The Alley Viper comes with the same pistol as the standard Viper, Duke, Flint, and maybe another figure or two. It's simply molded in black with no paint highlights. It's a cool sculpt, though, and I'm OK with it showing up again. It seems like a pretty standard firearm. 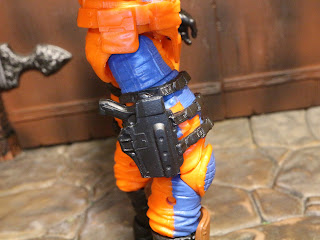 * There's also a holster for the pistol on the Alley Viper's right hip. It has three straps keeping it on and the pistol fits in there like a glove. 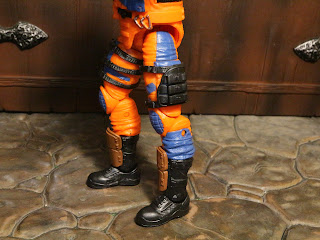 * There's a lot going on with the Alley Viper's legs, too. Besides his super cool padded boots he's also sporting a pouch, presumably to hold magazines for his pistol. If you heated things up you could probably get this off of his leg if you wanted to, but I'm not going to mess with it. 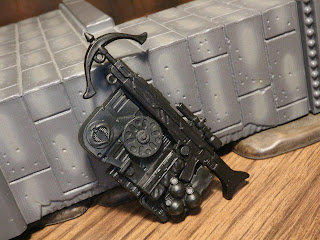 * The Alley Viper's backpack is an impressive accessory. The vintage figure had an incredible backpack, too, and this one has plenty of those goodies on it. There's a mine, a trio of frag grenades, and some magazines on the side, one straight and one banana clip, hat look like they'd fit inside of his rifles. Of course, there's also the super cool grappling hook rifle that the vintage toy had. 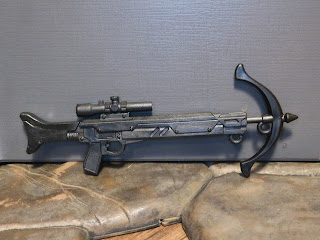 * The grappling hook rifle of the vintage toy wasn't removable but the 25th Anniversary version's was. It was a pain to keep on, though, but this one stays on nice and tight. It's really cool and sleek, definitely good for scaling the walls to get out of a tight spot, scale a perimeter fence, or to enter a target building. 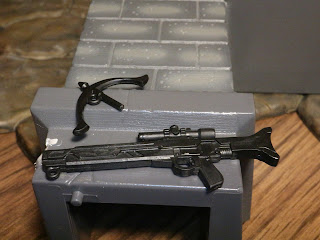 * The grappling hook tip is removable. The vintage toy had this feature, too, though the gun wasn't removable, so that was kind of weird. This one comes off and there's a loop on both the gun and the hook, allowing you to add your own string if you're industrious like that. 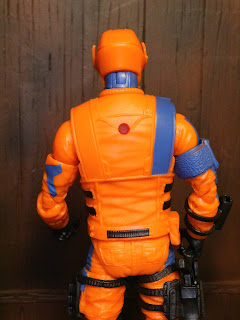 The Negatives:
* Doesn't it look odd that the one blue strap on the right is painted but not the one on the left? I assume these are the straps for the backpack, so it seems like they should both be painted. 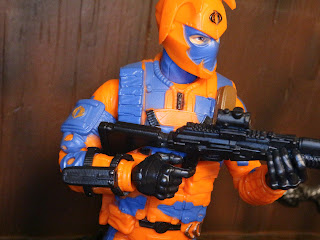 * Overall the Alley Viper has the same great articulation of everyone else in the line but his shoulder movement is a bit restrictive despite having butterfly hinged shoulders. I think it's due to the vest and the pouches. It's tough to get him in good two handed firing poses. he can hold the rifles with both hands just fine but an aiming pose is a real pain with the longer rifle. 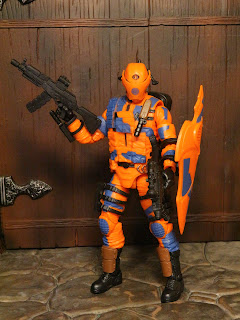 Holy smokes, did this guy get loaded down with great gear or what? While many of Hasbro's lines are starting to feel a bit lacking in the accessories departments lately the G.I. Joe Classified Series still comes through with lots of goodies and the Alley Viper might be the best yet. He looks incredible and is absolutely one of my favorite figures in the line to date. This guy truly stands out on the shelf and is just an amazing toy. There are so many cool little details and features here; it's just a dream toy for me. I'm not always that big on repaints but I'd love to see this guy in a few different color schemes from over the years such as the yellow and black v2 figure and just a straight up black, gray, and white urban camo variant. This dude is absolutely the coolest and absolutely earns his Epic rating.
Looking for more Cobra Vipers? I've also reviewed the standard Classified Series Cobra Viper.
For more G.I. Joe Classified Series reviews check out the following:
Alvin "Breaker" Kibbey
Arctic Mission Storm Shadow
Baroness with Cobra C.O.I.L.
Baroness (Snake Eyes: G.I. Joe Origins)
B.A.T.
Cobra Commander
Cobra Commander (Regal Variant)
Cobra Infantry
Cobra Trooper (Special Missions: Cobra Island)
Cobra Viper
Destro
Duke
Firefly
Flint
Gabriel "Barbecue" Kelly
Gung Ho
Heavy Artillery Roadblock
Lady Jaye
Major Bludd
Master of Disguise Zartan
Profit Director Destro
Red Ninja
Roadblock
Roadblock (Special Missions: Cobra Island)
Scarlett
Snake Eyes
Snake Eyes Deluxe
Snake Eyes (Snake Eyes: G.I. Joe Origins)
Snake Eyes & Timber: Alpha Commandos
Wayne "Beach Head" Sneeden
Zartan
Posted by Barbecue17 at 2/11/2022