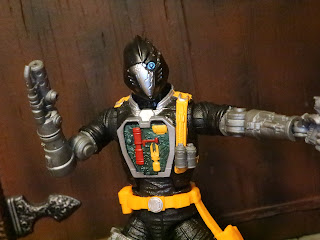 I do believe a few of the B.A.T.s and Alley Vipers snuck out at the end of 2021 but since Hasbro Pulse and other E-tailers didn't even start selling these guys until 2022 I'm counting them as new releases for this year. I'm starting things off with a look at the B.A.T., a Cobra battle android trooper who was originally part of the 1986 lineup. That was the year I got into G.I. as a kid so I definitely have fond memories of the bat. I still have most of my original vintage figures, too, so I have the B.A.T. somewhere. For the B.A.T. Hasbro has largely just updated the vintage figure which works really well for the B.A.T. as it's a pretty iconic design and it's not outdated or anything since it was already a little bit futuristic. I'm sure that, even with almost 40 years of technological advances, these things still cost Cobra a pretty penny. Let's take a look at the B.A.T. after the break and see if he has any upgrades for the Classified Series.... 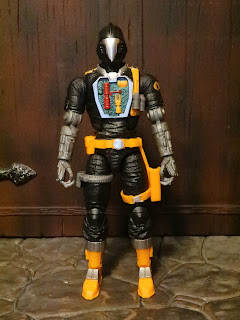 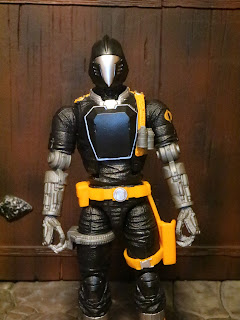 The Positives:
* As I mentioned in the intro, Hasbro didn't really have to update the B.A.T.s design. They updated the design multiple times during the early 2000s but fans just seem to love this one. It's a great look and this version has some really solid detail on the B.A.T.'s outfit and on the exposed mechanical arms. He's even toting some grenades on his left shoulder strap. The central part of the body is covered by a black armored panel which is removable, but more on that in a moment. 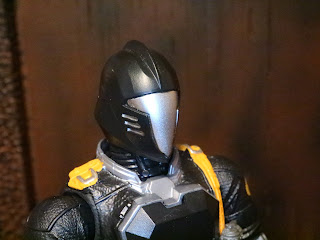 * The head is also a simple update but it looks great, so can you blame Hasbro for sticking with what works? On most of the G.I. Joe figures I like to see some modern upgrades but when the figure was already futuristic the classic design works just fine. 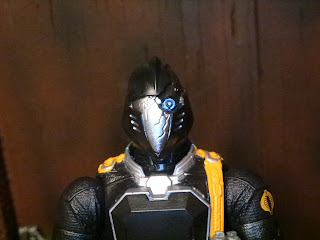 * To show what happens when a B.A.T. tangles with G.I. Joe, Hasbro included an alternate portrait with some battle damage. The visor is cracked and a blue robotic eye is visible underneath. It's a really cool addition to the figure and definitely opens up more display possibilities for this guy. 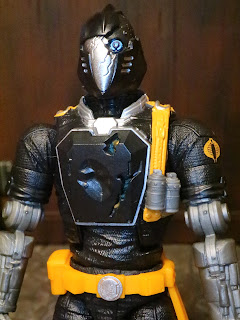 * To further add some battle damage there is also an additional chest panel with dents, cracks, and gashes in it. Just pop off the neat, clean one and snap this one on. Presto! A B.A.T. who's seen some battle. 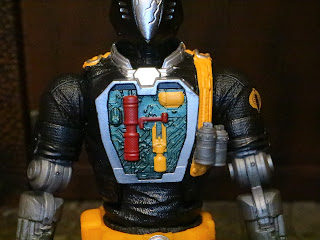 * If you want to see the innards of the B.A.T. just pop off the chest panel and all of the details inside are visible. On the vintage toy this was a lenticular sticker but here it's fully sculpted and pretty cool. The removable chest panel really is a pretty neat play feature for this guy and it makes sense that all of these sensitive parts would be covered. 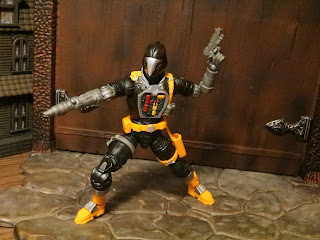 * The B.A.T. has excellent articulation. It's pretty much the same as every other figure in the line structurally but the range of motion and smoothness of the joints just feels better. His torso is also unhindered by any overlays or vests or anything so he can really get some great waist and torso movement. He really is one of the most fun figures to play with in the line to date. 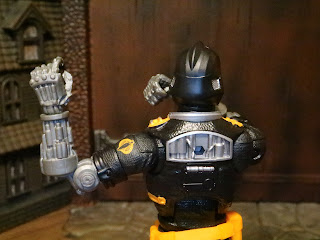 * Here's a look at the B.A.T. from the rear. You can see some wires and stuff on his back as well as a better view of his exposed forearms and the Cobra sigil on his left shoulder. 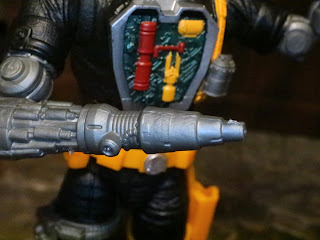 * The B.A.T. comes with the same three arm attachments that the vintage B.A.T. did but this time both the right and left hands are removable, so you can switch up the weapons used. First up is the laser blaster arm. It's simple but effective. There's a small hole in the barrel and some little details and such on the laser, maybe for adjusting the strength of the beam or something. 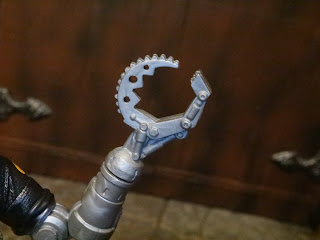 * Next up is the gripper arm. It's a pretty nasty looking piece of equipment for manhandling the Joe team. The claw doesn't actually work, though. 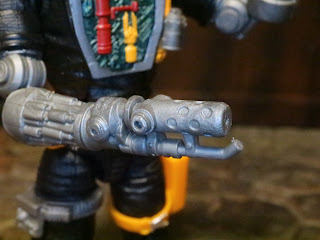 * Last up is my favorite piece: The flamethrower! It's a small torch with quite a bit of detail. There's a small hole in the barrel which would awesome with a flame effect. I just can't think of anything that would work for this as a flame effect, though. Anyone have any suggestions? 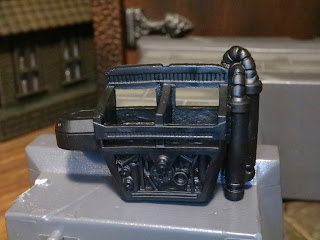 * The B.A.T.'s backpack is pretty detailed with plenty of storage space and some canisters connected to tubes. Maybe this is fuel for the flamethrower attachment? The backpack does stay on very securely, way better than most other packs in the Classified Series. 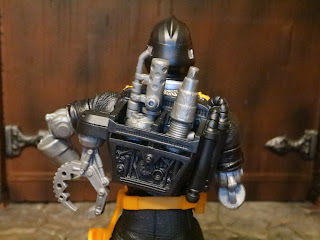 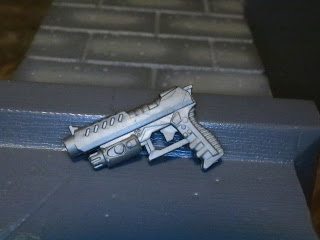 * Lastly, the B.A.T. comes with a pistol. It's a cool handheld firearm with a great design. Just the right bit of futuristic feel in this piece. 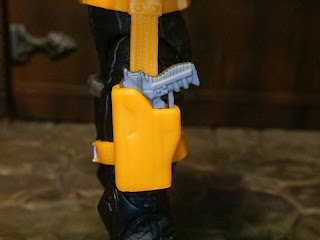 * The pistol can store easily in the holster on the B.A.T.'s right hip when it's not in use, too. Brilliant! 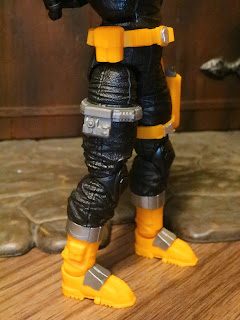 * Here's a shot of the right leg of the figure so you can check out the robot boots and the cool little doohickey on his right thigh. I wonder what this is? The vintage figure had one, too. Maybe an explosive device or something? 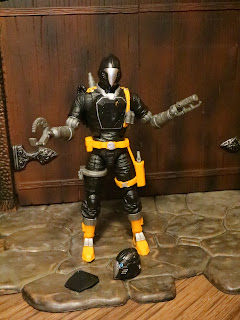 Wow. The B.A.T. is not just one of the best Classified Series figures in the line to date but he's easily one of the best action figures I've picked up in quite some time. Besides looking awesome he has excellent articulation, lots of fun, functional, and interactive accessories, alternate looks, and the ability to stow away all of his gear. That's pretty impressive! Hasbro already has a Python Patrol B.A.T. scheduled as a Target exclusive and I'm sure we'll see this figure again in the future. This guy is absolutely Epic and is absolutely a must buy. Fans of G.I. Joe, fans of robots, and fans of really cool action figures in general need to give this guy a look. He's definitely worth picking up for sure. Hasbro's G.I. Joe team continues to impress me and I hope they keep up the great work. The Classified Series has been one of my favorite lines of the past two years and it looks like we're in store for a great 2022 from them again.
This is the first B.A.T. I've reviewed on the site. For more G.I.Joe Classified Series reviews check out the following:
Alvin "Breaker" Kibbey
Arctic Mission Storm Shadow
Baroness with Cobra C.O.I.L.
Baroness (Snake Eyes: G.I. Joe Origins)
Cobra Commander
Cobra Commander (Regal Variant)
Cobra Infantry
Cobra Trooper (Special Missions: Cobra Island)
Cobra Viper
Destro
Duke
Firefly
Flint
Gabriel "Barbecue" Kelly
Gung Ho
Heavy Artillery Roadblock
Lady Jaye
Major Bludd
Master of Disguise Zartan
Profit Director Destro
Red Ninja
Roadblock
Roadblock (Special Missions: Cobra Island)
Scarlett
Snake Eyes
Snake Eyes Deluxe
Snake Eyes (Snake Eyes: G.I. Joe Origins)
Snake Eyes & Timber: Alpha Commandos
Wayne "Beach Head" Sneeden
Zartan
Posted by Barbecue17 at 2/04/2022